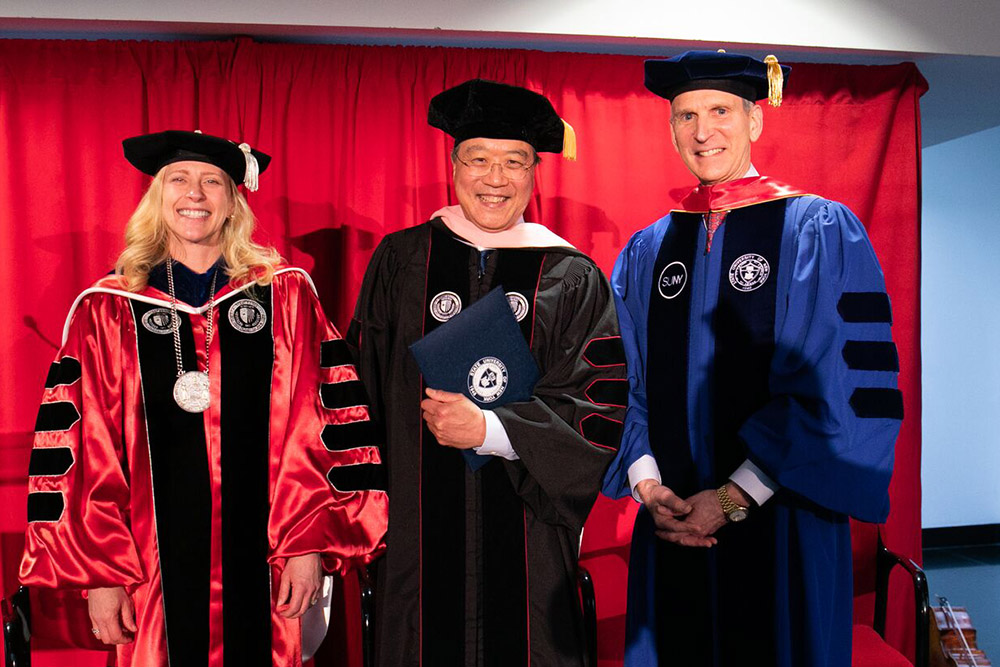 World-renowned cellist Yo-Yo Ma received an honorary doctorate in music from Stony Brook University on Saturday, March 12, at the Staller Center for the Arts.
The degree ceremony preceded the Staller Center Gala, an annual celebration of the arts that featured an all-Beethoven evening headlined by Ma performing with fellow classical music superstars Emanuel Ax on piano and Leonidas Kavakos on violin.
Stony Brook University President Maurie McInnis presided over the degree granting ceremony and described how Ma’s music “has been the soundtrack to our lives and our collective experience in a way that is utterly unique.” She noted that his music accompanied the 100th anniversary of the Statue of Liberty and the one-year memorial at the site of the attacks on the World Trade Center, has appeared in culture-moving films like Seven Years in Tibet and Crouching Tiger, Hidden Dragon, and has been enjoyed by millions in a remarkable career that has generated more than 100 albums and 18 Grammy Awards. Ma has also received the Presidential Medal of Freedom, the Avery Fisher Prize and the National Medal of Arts.
McInnis pointed out that Ma is a New Yorker, having moved to the city with his family at age seven. He attended The Juilliard School and later helped support city middle schools after founding the Silk Road Project, now known as Silkroad, which provided educational programming while using music to promote artistic and multicultural exchange. 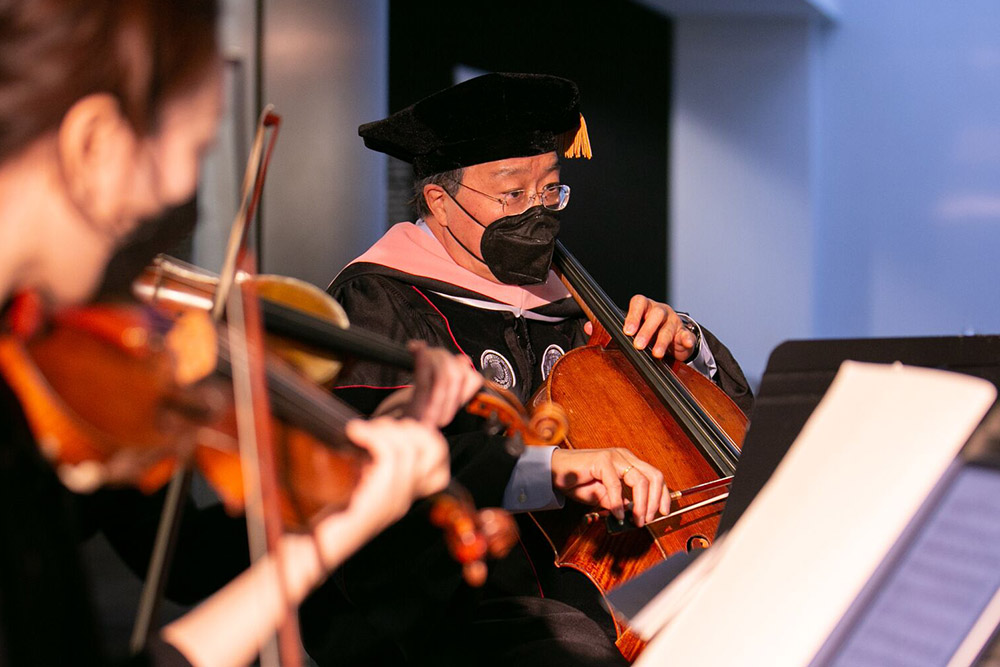 Yo-Yo Ma played two pieces with Stony Brook students in the Department of Music to close out the degree ceremony.

“He possesses a level of incredible artistry and virtuosity that speaks to countless hours and years spent on craft, on practice, on looking inward, and yet he continues to look outward,” McInnis said. “He continues to have an impact on us all, making real the beating, human heart in the sound of the cello. He continues to make, in his own words, ‘art for life’s sake.’ ”
State University of New York Trustee Cary Staller joined McInnis in the conferral of the degree and the recitation of the presidential citation.
Ma then played two pieces with Stony Brook students in the Department of Music to close out the ceremony. He joined graduate cellists and Professor Colin Carr in a short serenade by Goltermann. He then played with the Pelia Quartet, made up of graduate students Heejeon Ahn and Delphine Skene (violin), Sungjin Lee (viola) and Nathan Cottrell (cello), performing the first movement of the Schubert cello quintet.
Later in the eventing, Ma joined Ax and Kavakos on stage for their Gala performance. The celebrated trio performed an arrangement of Beethoven’s Symphony No. 6, “Pastoral” in a scoring by pianist Shai Wosner; Piano Trio in B-flat Major; Op. 11, “Gassenhauer;” and the Piano Trio in D Major, Op. 70, No. 1, “Ghost.” A post-show celebration took place at the Paul W. Zuccaire Gallery.