In a dark concert hall, Veronica Sih ’22 sat in disbelief as she heard Emmanuel Jal, a former South Sudanese child-soldier turned human rights activist, recount his life story.
“The thought of a seven-year old carrying guns was beyond comprehensible,” recalls Sih. The stories she heard “seemed to be more fitting in dystopian action movies, so different from the world I lived in.”
Sih was only three weeks into her freshman year when she was invited to attend the Oslo Freedom Forum, probably the world’s most famous human rights conference, in September of 2018. She owed the invitation to her writing professor, Dr. Rita Nezami. 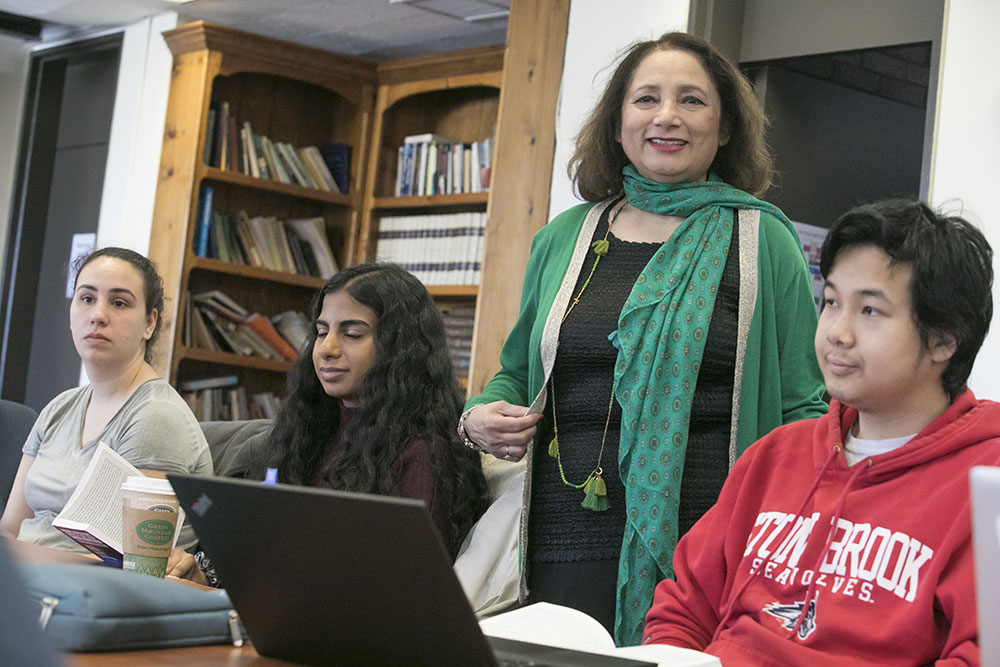 “She was going to the Oslo Freedom Forum, and she asked if anyone from class wanted to join her, so I went with her,” Sih said.
“Before I went to the Forum and heard their personal stories, my world was just me and upstate New York, and that was it,” she said. “I didn’t really know what was going on, and I didn’t really try to know. But hearing the personal stories at the Forum made me realize what else is going on.”
Bringing Global Issues into the Classroom
Sih’s experience reflects Rita Nezami’s educational vision: to engage students in global issues through personal stories. She brings this philosophy to her classroom every day at Stony Brook University, where she has been teaching with the Program in Writing and Rhetoric for more than 10 years. From the beginning, Nezami has been passionate about global issues.
“We have to broaden the horizon for our students, and to do so we cannot stay limited to United States issues. We must also journey further into the rest of the world,” Nezami said.
After discovering in 2011 that her students were unaware of the events of Arab Spring, she began to assign research essays on topics ranging from genocide to child trafficking and climate change. She asked her students to analyze and propose solutions to these pressing contemporary issues.
But Nezami soon discovered that it was personal stories – like the ones Veronica Sih heard in September – that had the greatest impact on her students.
Now when Nezami teaches Writing 102, a required course for Stony Brook students across all disciplines, she assigns her translation of a novella, By Fire, by Tahar Ben Jelloun. By Fire takes the reader inside the mind and sufferings of Mohamed Bouazizi, whose real-life act of self-immolation catalyzed the Arab Spring revolts.
For Sih, reading this work of historical fiction made the issues of global human rights come alive.
“By following that one man’s story throughout the entire book, you could understand and empathize with the main character more,” she said. “It definitely made me feel more connected to global issues.”
This comes as no surprise to Nezami, who recognizes the special relationships stories create between readers and characters.
“In what I consider an act of moral imagination, students work hard to enter the mind and reality of the protagonist and acquire a deeper sense of a radically different political, social, cultural and economic reality,” Nezami said. 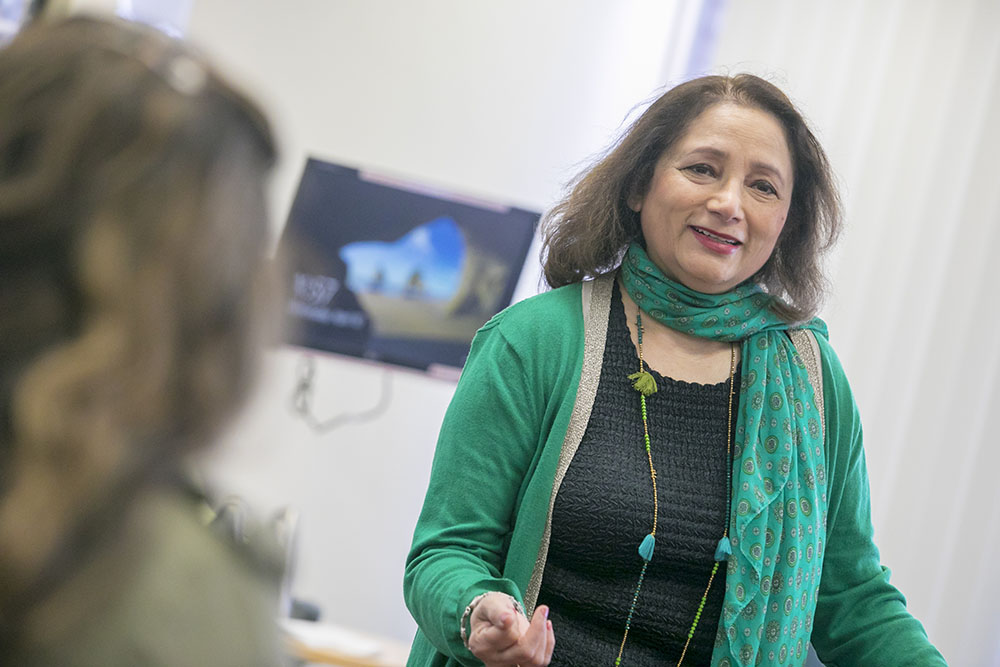 Nezami is a dynamic presence in the classroom.

Seeking to combine literature with her passion for global issues research, Nezami incorporates both into classes she teaches across the university. In an upper-division seminar for Honors College students, she uses a short-story collection by world authors to jumpstart research-driven projects. After reading and analyzing these stories, the students pick an issue raised in these literary works to explore through further evidence-based research.
“Research is very, very important. But equally important is literature,” Nezami says. “Because all these global issues are depicted through literature, and that generates interest in all these subjects.”
Making Global Citizens
Nezami’s pedagogy is inspired by her own her global experiences. Born in India and educated in England, Russia and France, Nezami speaks six languages fluently.
“People ask me where am I from, and I say I don’t know anymore,” Nezami says. “I’m a global citizen. I consider myself international because my culture is embedded in all these different cultures.”
Nezami’s dream is that Stony Brook students will also become global citizens.
“A global citizen,” she explains, “is someone who can understand and respect other cultures and who does not have an ethnocentric and nationalistic attitude towards the world that says, ‘American culture is the best and the only culture in the world,’” she said. “That attitude is what I want to shatter.”
For Nezami, global citizenship isn’t simply about learning about the other places but also about seeing the connections between our own experiences and those of the rest of the world.
“To understand what is going on there is to understand what is going on here,” she said.
Ultimately, Nezami hopes that her teaching will inspire students like Sih to take positive action. In literature, she believes, students “may find a moral obligation to know what other people are going through so that their compassion, and maybe their political action, can extend beyond themselves.” 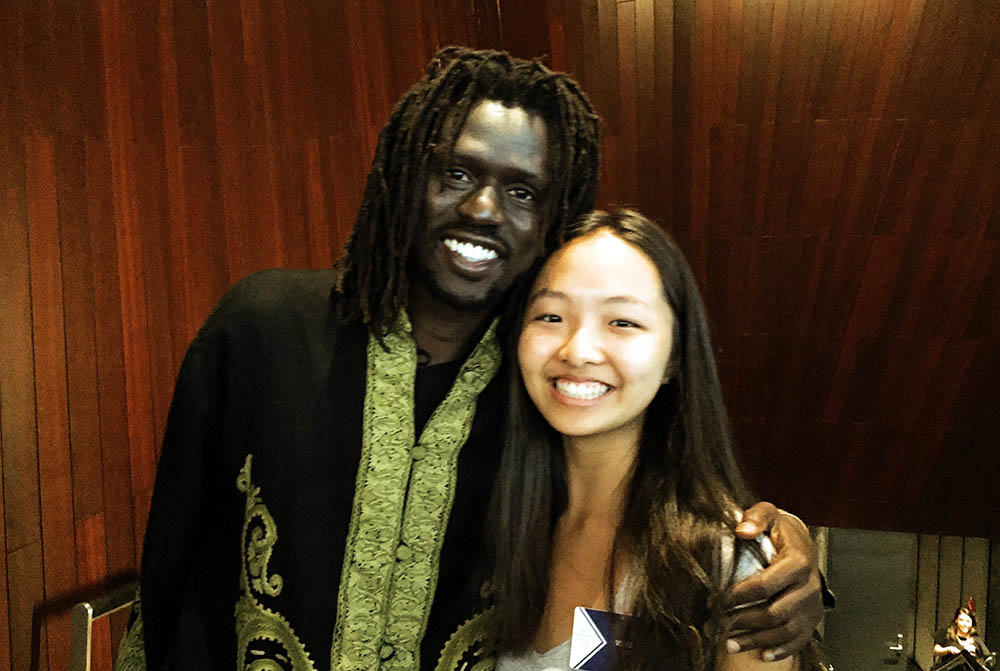 Sih agrees. She remembers Jal’s presentation at the Oslo Freedom Forum as a personal turning point:
“I listened to his story: how he learned forgiveness and advocated for peace,” she said. “If someone like him, who had so much stolen from him, could still manage to devote his life to giving other people hope, inspiration, peace, I thought maybe I could too.”
— Emma Cesario