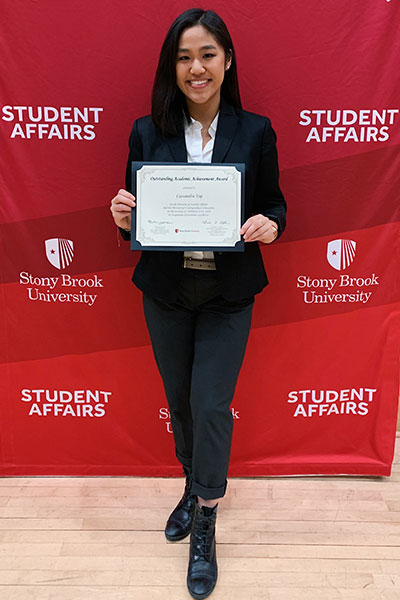 Cassandra (Casey) Yap ’21 was well acquainted with the medical profession at a very young age.
She decided to follow in the footsteps of her internist father, Dr. Wilson Yap, after growing up going to his clinic — which her mother managed — and listening to his stories about how he established his practice in New Jersey following a move from the Philippines to the United States.
“After seeing him work with patients, I have worked towards that goal all of my life,” she said.
Yap, who is in the University Scholars honors program at Stony Brook, began as her father’s receptionist before becoming a medical assistant, entrusted with handling electrocardiograms and performing other procedures. Yap honed her communication skills with patients and learned how to use electronic medical records.
From shadowing a cardiologist and an otolaryngologist — and watching her father work  — Yap knew she wanted to be a physician who can create lasting, trusting relationships and help patients make wise choices about maintaining their health.
Yap later ventured to Guatemala to volunteer as a medical assistant, going independently as opposed to a service trip with a large group.
“I met other volunteers from all over the world who were not only on medical missions, but there for environmental or veterinarian projects. It was a wonderful experience, living in Antigua, Guatemala, and riding a bus to Santa Catarina, where the family clinic at which I volunteered was located.”
Yap took patients’ vitals, administered vaccinations, monitored blood sugar levels of diabetic patients, organized prescription medication and sorted patient files in the pharmacy. She also created educational posters about the importance of disinfecting drinking water.
Her volunteering played a significant role in Yap’s path to medicine. “I had considerable time to reflect on the full range of my medical experiences,” she said, adding that she found excitement in learning which new cases the nurses and she would take on or which schools they would visit to administer student vaccinations. 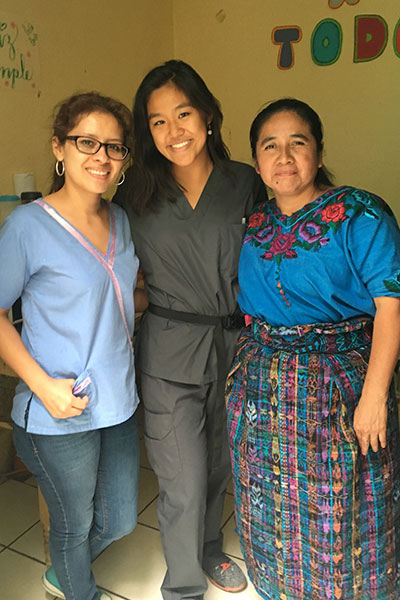 “When I am a physician, I will not forget the little things that can make the experience of healthcare that much better,” she said. “I know I did not change the world by being there, but I believe I left a positive mark on students and families in this city in Guatemala. More importantly, they have left a bigger mark on me.”
Because a pre-med track is demanding, Yap found it critical to stay organized. One way she does that is through a practice known as bullet journaling, which involves creating to-do lists and jotting down ideas in bullet form. It has proved invaluable to her ability to juggle rigorous academic demands and still enable her to perform the stewardship expected of Stony Brook University Scholars.
Yap has taken several leadership and mentoring roles. She has been a University Scholars Fellow, Peer Assisted Leader and Stony Brook Student Ambassador. “While at Stony Brook, I have grown as a student and person, finding my passion for helping others,” said Yap, who served as a mentor for a first-year University Scholars student as a PAL.
Yap first became involved in University Scholars through the program’s Outreach Committee and later became one of the co-chairs. She continued her service at the school’s food pantry, blood drives and in Guatemala. The Freehold, New Jersey, resident has also worked as a skills-based tutor at the Academic Success and Tutoring Center.
“My experiences have reaffirmed my desire to enter the medical field as a physician, where I will strive to apply both the scientific knowledge and interpersonal skills I have developed at Stony Brook,” said Yap.
— Glenn Jochum