For the all-student Stony Brook Volunteer Ambulance Corps (SBVAC), it began with a Volkswagen bus and a Cadillac.
In 1970, frustrated by long response times from local ambulance corps, Stony Brook University students formed the SUNY at Stony Brook Volunteer Ambulance Corps (which ultimately became SBVAC) as a faster way to answer emergency calls on campus and provide needed transportation services for on-campus students to the infirmary and doctors’ appointments off campus.
Before SBVAC was created, the Setauket Ambulance Service and Stony Brook Fire Department serviced Stony Brook, taking between 15 and 20 minutes to arrive. The SBVAC changed all that: Today’s standard response time is seven to 10 minutes. 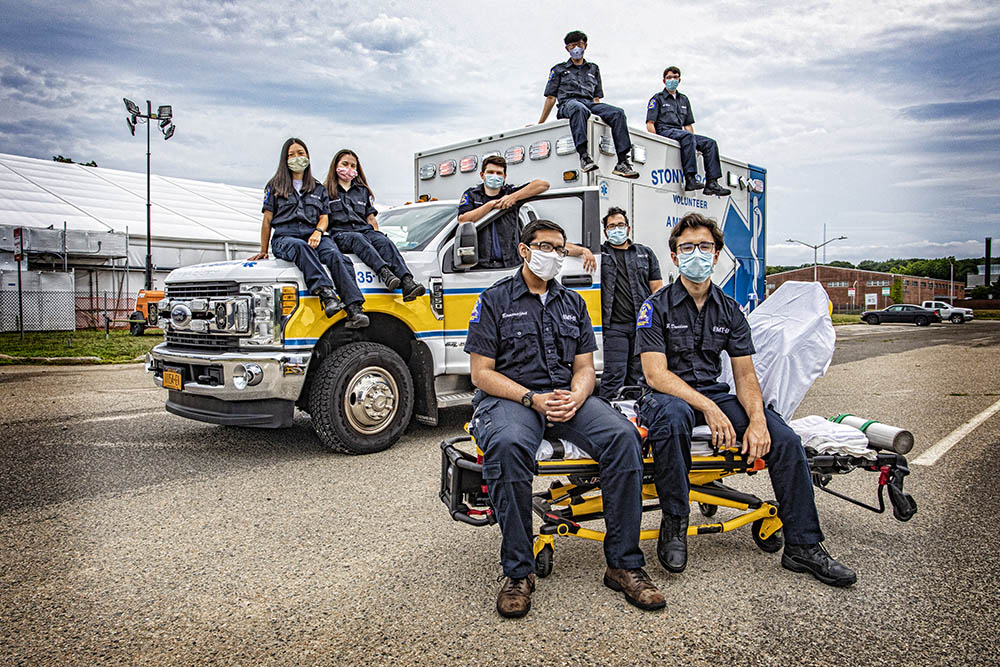 SBVAC crew. On the stretcher: Nikhil Bamarajpet, left, and Zachary Davidson; on the hood of the ambulance: Amy Zeto, left, and Inna Trygubchuk; by the door: Brad Kenneally, left, and Kevin Quintero; on top of ambulance: Gavin Yu, left, and John O’ Hare.

To launch SBVAC, the students made use of a donated VW bus and a 1959 Cadillac ambulance. The VW was used as a transportation vehicle while the Cadillac was the first ambulance and thus a full-time emergency service — the first such student-run operation in the country — was born.
Leo DeBobes, SBVAC’s longtime faculty advisor since 1993, addressed the emergency service’s early years.
“They operated with an old Cadillac Ghostbusters-style ambulance, later shifted to the Type II vans, and then to the modern Type III modular rigs.”
Larry Starr, SBVAC’s founder and president from 1972 to 1974, noted that the original Cadillac was built from a hearse because “hearses were the only vehicles back then that could carry a patient in a reclining position.”
In the long run, the vehicles’ strange appearance didn’t matter because “we were at the vanguard,” Starr said. The service was effective and efficient, and it had the distinction of being the first student-run operations in the country. 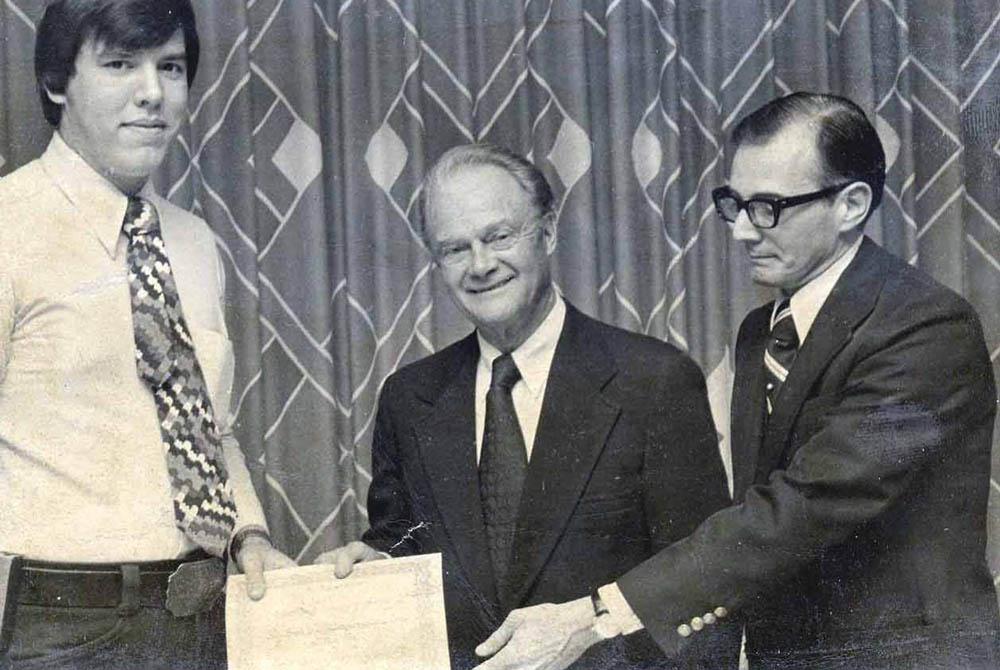 The agency faced a major obstacle in its early years: there was no state funding except for routine vehicle maintenance and fuel, and the Undergraduate Student Government (USG now, then known as “Polity”), had never been involved in such an operation. Funding was an issue.
What’s more, the student government couldn’t always agree on what portion of student activity fees should be used to help buy equipment and vehicles for the all-student volunteer corps.
But Starr, a political science and economics major who also later became a special projects assistant to then-President John Toll, saw an opening to lend his grassroots organizational skills to fight for funding for SBVAC.
Starr organized a student referendum vote to specifically allocate $4 of the then $70 student activity fee to the ambulance operation. He penned an op-ed piece in The Statesman asking the Polity Senate, Student Council and University community to consider supporting a student fee of $4 to help with funding for SBVAC, which was handling 150 calls per month. Starr made a strong case for funding the service, whose hard-working volunteers were not even receiving academic credit for their work, which included first aid and training courses.
Students voted in favor of the funding referendum regarding SBVAC, rating it the highest campus priority, higher even than supporting The Statesman or intramural sports.
When the $4 student fee was enacted, however, no other funding was necessary at that time, according to Starr.
Today SBVAC, which has oversight from a faculty advisor and medical director, is mostly funded by New York State; however, about 10 percent of its more than $300,000 budget comes from the USG.

Before SBVAC secured the necessary funding, it “faced constant financial troubles in the upkeep of its operations,” such as buying/maintaining ambulance vehicles and medical equipment, according to SBVAC’s current president, Nikhil Bamarajpet ’21, a biology major.
That didn’t prevent it from evolving and flourishing.
In 2002, SBVAC won the Suffolk Regional EMS Council Agency of the Year Award, then went on to win the New York State EMS Agency of the Year Award — a remarkable feat considering that the collegiate EMS agency competed against all community and locally funded EMS agencies in New York State.
In 2013, SBVAC won the National Collegiate Emergency Medical Services Foundation Collegiate EMS Agency of the Year Award.
Starr said he is proud of how far SBVAC has come.
“The size of the fleet today is unbelievable as is the money available for vehicles and equipment. They’ve done a 180,” he said, adding that the “level of care has changed but not the desire to help and make sure people get what they need.” 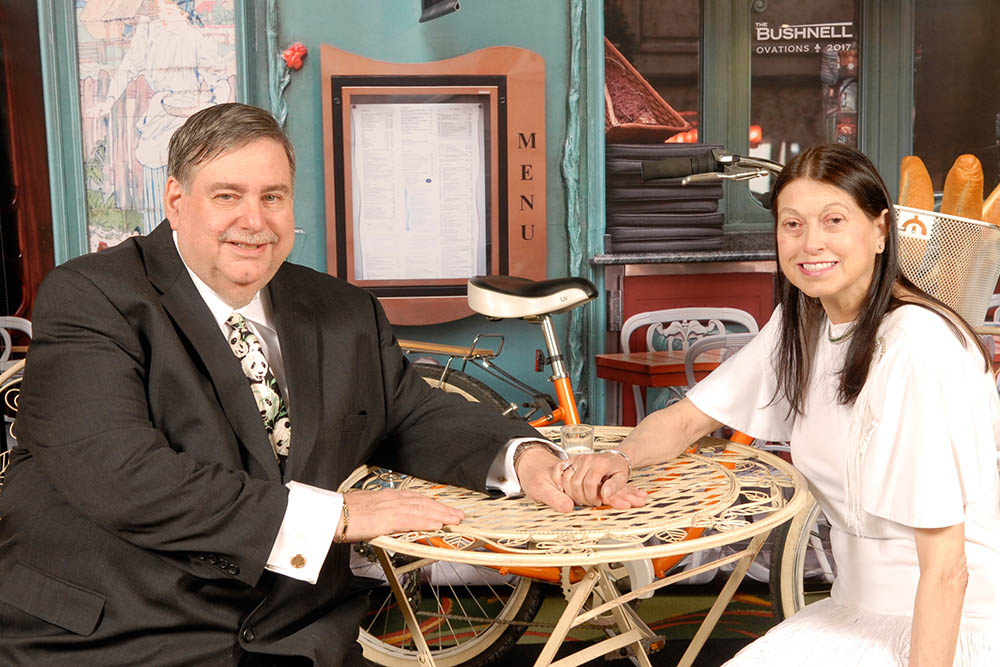 Larry Starr pictured in 2017 with his late wife Cindy, also an EMT.

To uphold such high standards requires recruiting and retaining the best qualified individuals. So who can apply and how does the application process work?
Bamarajpet explained the enrollment process.
“Students apply to our agency, no experience necessary. We get roughly 100 applicants every semester and choose about 10 to 15 individuals who must go through a 10-week probationary class,” he said, adding that the “most important quality for joining SBVAC would be dedication.”
Those who are selected learn the necessary medical knowledge to become an EMT, including subjects such as human anatomy/physiology and patient communication/considerations. They are eventually tested on their medical knowledge and practical skills, and must pass a short-answer midterm and final.
“By the end of the probationary semester, we are left with a number of members who are inducted into the agency,” Bamarajpet said. “This process repeats itself every fall and spring semester.”
The volunteers, after they pass a probationary class, are sponsored to earn an EMT certification by completing a comprehensive Emergency Medical Technician training program approved by the State. 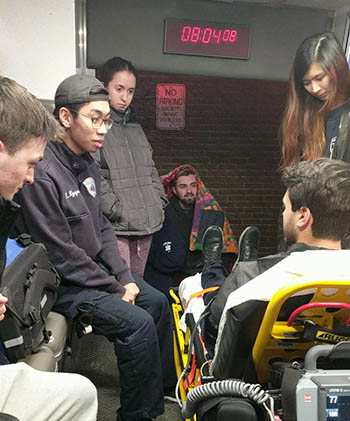 DeBobes added that the Basic or EMT-B is the entry-level emergency care course for ambulance personnel and that the first-level course consists of nearly 200 hours of classroom didactic and skills time, plus clinical observation time. “Some members have gone beyond the level to achieve Advanced Life Support or Parmamedic level certifications,” he said.
SBVAC’s application for the Fall 2020 probationary class can be accessed here.
In addition to Starr, some key personnel through the years include Ann Teng, who served as SBVAC chief when the agency won New York State EMS Agency of the Year; Ahmed Belazi, president and SBVAC chief from 2006 to 2009 and a current faculty advisor; and DeBobes, faculty advisor for 27 years, from 1993 until earlier this year.
Bamarajpet also singled out a trio of volunteers who greatly impacted him personally. They include Elizabeth Vargas, who was secretary and vice president of the agency; two-time SBVAC President Michelle Melfi; and Andrew Willis, former chief and Bamarajpet’s crew chief during his probationary semester.
“Elizabeth singlehandedly supplied food to our members at headquarters during the pandemic, trained a countless number of volunteers and poured an exceptional amount of time into the agency,” Bamarajpet said.
“Michelle also served during the thick of the pandemic when many officers and members had to leave SBVAC, and inspired me to run for president, while Andrew set a standard for care and service that I aim for constantly,” he added.
To be sure, the SBVAC experience is invaluable, as many of its alumni have gone on to exceptional careers.
“They are working in medicine, nursing, dentistry, public health, emergency management, teaching, engineering and academia, as well as many other fields,” said DeBobes, who directly preceded Belazi as faculty advisor.
He recalled how SBVAC’s reputation and community role evolved over the years, maturing from being a provider of basic emergency treatment and transportation on a 365-day-a-year, 24/7 basis, to an advanced life support emergency medical service still on a 24/7 365 day basis.
Today, SBVAC is an Advanced Life Support and Basic Life Support EMS agency with three ambulances and a responder car.

Bamarajpet and Chief Zachary Davidson ’20, a biology major, are at the helm, making the final decisions for the agency.
While the University is in session, emergency phones are staffed 24 hours, seven days a week, and pairs of volunteers are on duty for three to three-and-a-half-hour shifts.
Tough times, of course, call for strong leadership to an organization’s core mission. During the coronavirus pandemic, SBVAC volunteers answering the call of duty display unwavering loyalty.
Because SBVAC primarily serves the campus community, and many students left in March and April, the agency experienced a decline in the number of calls it received.
To offset the anticipated drop-off in calls, SBVAC members set up an interfacility transport service in which ambulances were used to transport quarantined/isolated students either from the Emergency Department to their dorm or from one dorm to another.
“Apart from those transport calls, we also get calls from the LIRR train station on campus and the Long Island State Veterans Home, which is in our district,” Bamarajpet said. “We have been coping with all of these calls pretty well.”
Due to the pandemic, many SBVAC members returned home, but a few decided to stay on campus and help out.
“Many of our members pulled multiple shifts to the point where during the thick of the pandemic, our entire weekly shift schedule was filled to capacity,” said Bamarajpet. “It really was incredible to see so many people wanting to stay back — forgoing their housing reimbursement — to help out in any way they could.”
Typically, a SBVAC crew consists of four volunteers: crew chief, emergency vehicle operator, attendant and a probationary member. During the thick of the pandemic, only two volunteers — crew chief and emergency vehicle operator — were used to minimize potential exposure and limit usage of personal protective equipment.

Only the crew responding to alarms — the duty crew — and officers who were doing work were allowed to be in headquarters, located on campus at 100 Gymnasium Road. Everyone was required to wear a mask and maintain social distancing. In addition, anyone entering headquarters had to take their temperature and log it in a Google form.
“I believe all EMTs during this time were carefully handling every single patient they received, not only for their safety but for the safety of their crew and their family,” said Bamarajpet. “EMTs are often the first medical providers to make contact with a potential COVID patient, and we have to make sure that we are taking every single precautionary measure we can and limiting the time we spend touching or interacting with a patient regardless of their medical history. We had to suit up, wear two masks and wear long gloves. This was very, very different from how we normally do things.”
Bamarajpet said that other EMS agencies on Long Island, such as those in Ronkonkoma, Central Islip and Brentwood, request SBVAC to be on standby at their headquarters.
“I have received calls as simple as an ankle sprain or a cold to extremely serious calls such as suicide attempts and cardiac arrests,” he said.
There’s no disputing that SBVAC boasts impressive credentials despite the fact that it is staffed by college students.
“At the end of the day, we have enormous responsibility and need to make sure that each and every one of our members is up to par with that responsibility,” Bamarajpet said. “Individuals wanting to do this must be dedicated or passionate. This is not just something you put on a résumé — we are talking about helping people on what could be one of the worst days of their life.”
— Glenn Jochum