Stony Brook University President Maurie McInnis was joined by student and campus leaders, along with alumni in the New York State Assembly, for the official ribbon cutting of the UNITI Cultural Center, which is now located in the Stony Brook Union. The ceremony took place Saturday, Oct. 23, and was part of the Presidential Inauguration Day festivities.
The UNITI Center’s new home was made possible by a $3 million New York State Assembly grant initiated by SBU alumnus and Assembly Speaker Carl Heastie ’90, along with his colleagues and fellow alumni Assemblyman Steve Englebright ’75, Assemblywoman Kimberly Jean-Pierre ’07, and Assemblywoman Latoya Joyner ’08. Adding her support at the ceremony was Assemblywoman Sarah Clark ’99, who traveled from her district in Rochester, N.Y. McInnis referred to the alumni as the “New York State Assembly Seawolf team.”
Established in 1978, the UNITI Center was built to cultivate a culture of respect, growth, learning, celebration, and diversity, a goal reflected in its full name, “United Nationalities in Transcending Ideologies.” The center’s founders wanted an identified place on campus that would tend to educational, spiritual, and cultural growth.
McInnis noted that the last year and a half have revealed the country’s critical need for equitable and inclusive education, systemic change for racial equality, and multicultural collaboration. “I could not feel more confident in Stony Brook’s ability to lead the way in this effort — we have always been a university that recognizes the importance of an inclusive, multicultural community,” she said. “A university that knows the value and unparalleled potential for discovery that comes with a diverse population of students, faculty, and staff. Now more than ever, I want us to rely on and uphold this integral part of our mission.” 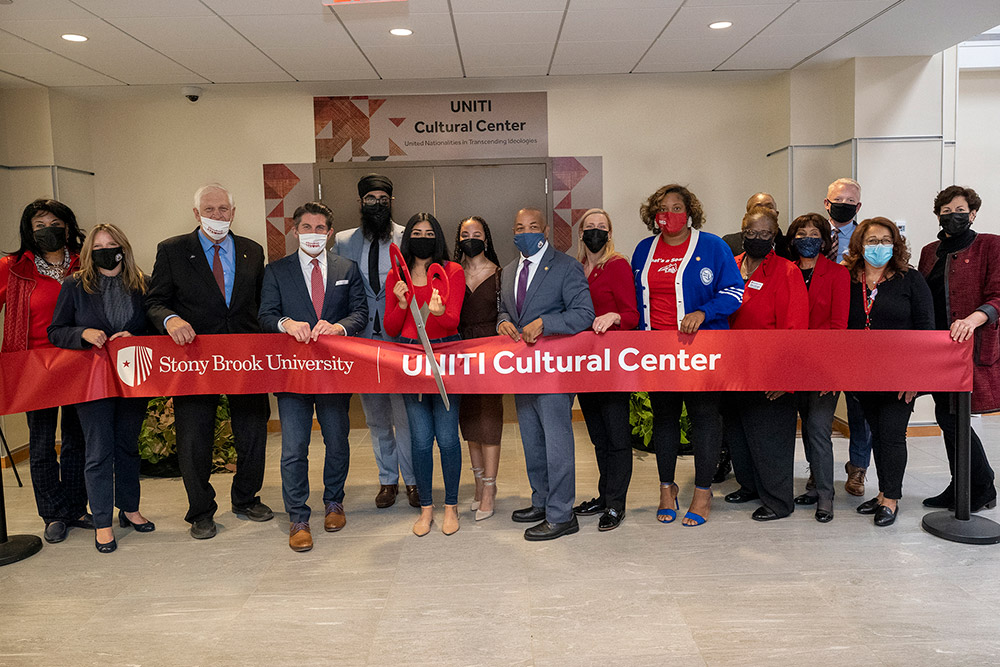 “Here we are in this wonderful space, for today’s students, for the nearly 100 cultural clubs and organizations, and even groups beyond that, for all the community here to enjoy,” said Cheryl Chambers, associate dean of students and director of Multicultural Affairs.
Heastie recalled that when he was a Stony Brook student 30 years ago, the UNITI Cultural Center was “where we strategized, where we bonded, where we laughed, where we cried, where we planned,” and asked the students in attendance to cherish a space that alumni have long championed.
“Those of us that were here 30 years ago wanted to always make sure that there was always some place, a refuge, for students to come together,” Heastie said.
State University of New York Chancellor Jim Malatras was also in attendance, and said the space demonstrates to students “that we value them and want them to have spaces to learn, to debate, to explore how to become a more just society in a time where we can’t even engage in a debate in a meaningful way without being argumentative and polarized.”
The Grand Opening of the UNITI Cultural Center will take place Feb. 2, 2022, and kick off the Spring 2022 semester with the opening program for Stony Brook University’s Black History Month.