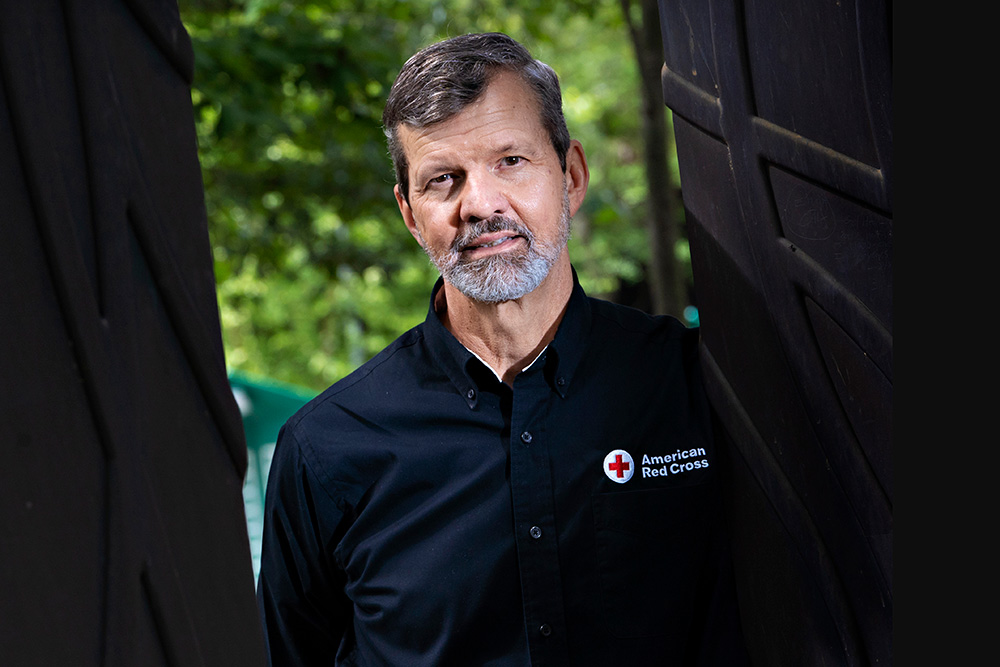 At age 65, when many people are thinking of retiring, career lawyer Doug McNally ’74, ’18 decided to get his master’s in social work at Stony Brook University to focus on the “counseling” aspect of being a counselor at law.
McNally, of Northport, New York, earned his bachelor of arts in sociology from Stony Brook before obtaining a doctorate of law from Hofstra University in 1977. He worked in private practice until 2009, when he joined the law firm of Hamburger, Maxson, Yaffe & McNally, LLP (Melville, New York) as a partner.
“During my four-decade career as an attorney, I often felt that solving the ‘legal’ problem my clients faced was the easy part and, at times, felt I wasn’t really helping many of my clients address the core issue that caused or contributed to their legal problems,” McNally said. “Often it was more of an emotional, behavioral or mental health challenge that needed to be addressed that manifested itself in our legal system. While I provided an empathic ear, I didn’t feel qualified to truly help the client who was struggling with such issues.”
After considering retirement, McNally — who also served in the New York Guard state volunteer force as a staff judge advocate and public affairs officer, and as a United States Coast Guard legal assistance attorney — decided to seek a master of social work degree, “so I could finally help others better equip themselves to address the emotional challenges we all encounter, to one degree or another, during our lives.”
He added that he had first thought of getting his master’s after graduating from SBU in 1974. “I finally got to it 40 years later.”
McNally admitted he was not planning on starting a new career, but sought an opportunity to volunteer his time and bring along his newfound skills as a social worker, plus his 40-plus years of experience as a lawyer.
“The Red Cross turned out to be the perfect vehicle to accomplish that goal,” McNally said.
While at Stony Brook, he participated in a simulated disaster drill that inspired him to become a Red Cross volunteer. McNally is now a disaster mental health specialist and coordinator of Long Island’s Rapid-Response Mental Health Team, providing on-scene emotional support at local tragedies as well as disasters across the country: the California wildfires, a Louisiana hurricane — at the height of the pandemic — and floods in Arkansas.
McNally’s first national deployment was to the California wildfires in January 2019. He had finished his training in early December and was both excited and nervous to deploy.
“I spent two weeks working in shelters with wildfire victims listening, assessing, advocating, and connecting folks with family and available services and doing all I could to help them get back on their feet after losing everything,” he said. “It was exhausting but so rewarding. I learned a great deal and worked with some very talented and dedicated Red Cross staff and volunteers.”
McNally responded to widespread flooding in Arkansas in June 2019, working in shelters with a team of Red Cross workers in rural parts of the state. “I even participated in a ‘search and rescue’ mission for a kayaker who was swept away by the flooding,” he recalled. 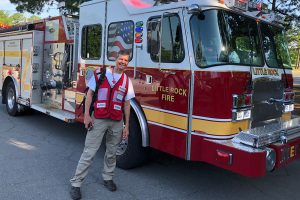 In August 2020, McNally deployed to Louisiana following Hurricane Laura. He recalled being on duty for 36 hours with a very dedicated volunteer MD, setting up COVID isolation wards in a shelter and monitoring, through the night, a shelter resident who had overdosed and who his team brought back with Narcan.
McNally was exposed to COVID while working in the shelter and went into quarantine in New Orleans. After being released, he worked at several hotels where storm victims were housed.
McNally has also deployed locally with the Rapid Response Team, helping at Long Island fires and a sewage spill in a Queens neighborhood. His most recent local assignment was assisting after an apartment building fire in Jackson Heights that left more than 300 families homeless.
“On the way home from that very long day, my co-worker and I answered a call to respond to a tragic fatal house fire in Levittown,” he said.
“One thing that a natural disaster does is force us to shed our differences and join together in a common, often lifesaving, task,” McNally added. “I’ve found that so encouraging during this challenging political era. Nobody asks who you voted for at a disaster site; you just roll up your sleeves and help your neighbor.”
McNally also found a way to give back to Stony Brook, using his legal background to help create — and co-teach — a popular course on forensic social work.
“I’ve taught continuing education classes for other lawyers, so the classroom was still a familiar place for me. And I must say that this time at Stony Brook I actually stayed awake in class,” he joked.
“As an independent study course, I worked under Professor George Leibowitz and developed a forensic social work course for the School of Social Welfare,” McNally said, noting that Leibowitz had just written a book on the subject. “I suggested the course for Stony Brook as I was surprised that there was no course for social work students dealing with our legal system, despite the fact that every practicing social worker encounters legal issues and processes throughout their career with so many of their clients. I felt strongly that a basic understanding of our legal system and the role of social workers in that system was essential.”
The course was offered in Fall 2018 and McNally assisted Professor Leibowitz in teaching it.
McNally most enjoys the satisfaction of helping people in dealing with crisis. Of his volunteer work, he said, “Just to be there and to listen to them — that’s the first step toward their recovery.”
— Glenn Jochum