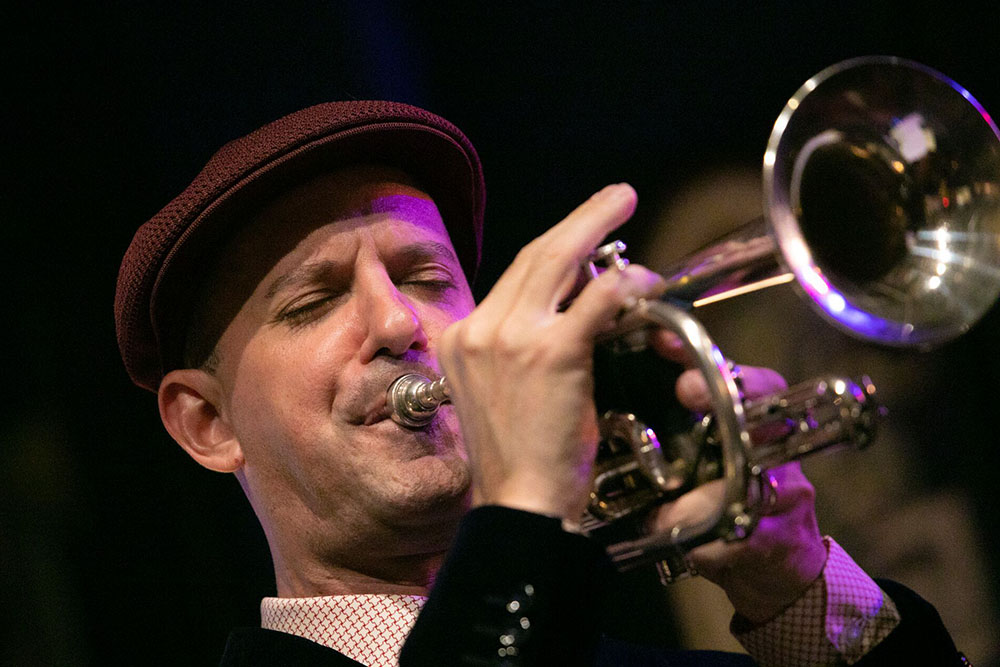 Tom Manuel performing at The Jazz Loft in February 2020. Photo by John Griffin

Tom Manuel got his first jazz infusion at a family event when he was growing up.
“I clearly remember lying on the grass and hearing a deejay play Glenn Miller’s ‘In the Mood,’” recalled the Lake Ronkonkoma, NY native. “I was a weird kid from that moment on.”
After becoming proficient on the trumpet, Manuel could always find somewhere to jam with other musicians every night of the week, whether it was swing dance music on Monday night at the Sage Café in Blue Point or The Dunton Inn in East Patchogue where big bands played — honing his craft for audiences ranging from South Shore fishermen to hardened bikers.
Now in his early 40s, Manuel is director of the Young Artist Jazz Program in the Department of Music at Stony Brook University. He’s also the jazz artist in residence and teaches the history of jazz.
A jazz ambassador, Manuel sent a Liberian music teacher school supplies and later brought 40 instruments, and taught children trombone, trumpet, saxophone, drums and clarinet. While performing at the Long Island State Veterans Home, he met a young man who went to Havana University and they started an educational tourism program in Cuba. Similar trips to Haiti are in the works.
Manuel is also excited about the Kennedy Dream Project. In 1967, jazz saxophonist Oliver Nelson wrote the Kennedy Dream Album, in which each movement starts with a snippet of a John F. Kennedy speech. 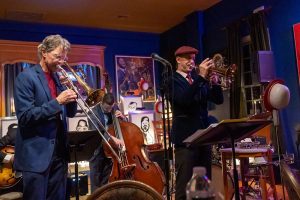 “The topics that were addressed spoke to me, and sadly, they still speak to me,” said Manuel.  “You’d think we’d have made more progress than we have in the past 50 years, but we’re dealing with the same things.”
For the project, Manuel is composing new material along with Oliver Nelson Jr., son of the original composer, and fellow Stony Brook professor Ray Anderson. The group will play on March 27, 2022 in the Staller Center. Manuel hopes to eventually extend those performances to underserved communities through grant funding and sponsors.
Manuel also runs The Jazz Loft, a non-profit organization in Stony Brook Village that he founded five years ago. The 6,000-square-foot building is leased to him by the Ward Melville Heritage Organization for a dollar’s rent for 49 years. The charitable and visionary spirit of Ward Melville, who gifted the land that Stony Brook University sits on today, lives on in this hallowed building.
With its combined mission of preservation, education and performance, The Jazz Loft — one of only four jazz museums in the United States — is a rich source of memorabilia that includes archives, instruments, diaries, autographed pictures and original sheet music of the greatest jazz musicians of their day.
Manuel pointed to the first Grammy ever awarded — won by jazz singer Keely Smith and her then-husband Louis Prima in 1958 for their recording of “That Old Black Magic” — and noted how it was nearly thrown out on a hot day while boxing up items. There’s also a bass belonging to a friend that was used on Ben E. King’s pop classic, “Stand By Me.”
When The Jazz Loft is not filled with nostalgia buffs, it’s buzzing with music, to the tune of 160 performances a year attended by 300 to 1,000 concertgoers a month. One of only a few jazz venues in the New York metro area, the Loft hosts big-band concerts in the “Wow Room,” named for the most frequent visitor response it invokes. Acoustic duos and trios made up of doctoral students and music faculty perform in a more intimate room.
Since music means different things to everyone, human connections are common. “There are a lot of them, and they’re not always in the form of a standing ovation,” said Manuel. “A lot of times they happen when we move someone emotionally.”

The COVID-19 pandemic closed the Loft for 15 months from March 2020 through July 2021, but Manuel found ways to ensure the show went on. “Although we were closed, we had a rigorous outdoor concert schedule,” he said. “We were very creative in what we did.”
One out-of-the-box initiative was performing outdoor “pop-up” concerts, drawing 80-100 people.
“People were literally in tears,” said Manuel. “They had been cut off from everything, and they were so happy just to have the music. And since they were enjoying it, we kept it going through the fall.”
In the winter, Manuel had a fire going on the lawn during performances. “It was weird,” he said. “Usually for a gig you’re telling people to make sure they have their music stands and sheet music, and here I was telling them to make sure they had snow boots and to bring wood to burn.”
The Loft re-opened for indoor performances in mid-July, though Manuel admits that “normalcy” has not been achieved, or that he even knows what “normalcy” means in a post-COVID world. “We’ve opened to small groups and capped the attendance at 65 to give everyone some space and breathing room.”
Manuel added that the Loft’s “Summer SWAP” Program [Stages With A Purpose] was a success, with stages for art, education, history and jazz. “People loved it, and it was nice to see them enjoying it.” 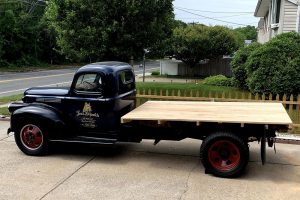 The Jazz Dispatch is a renovated vintage truck which will bring music to remote venues.

The pandemic also presented an opportunity for Manuel to take the music in a new direction. Literally.
“One of our fans had some vintage trucks sitting around,” said Manuel. “A donor stepped up and bought a 1941 Chevy flatbed that we are having restored. Other donors contributed to the restoration costs, and another donated the wood to build the stage on the flatbed, even though wood was hard to get and very expensive during the shutdown.”
Dubbed the “Jazz Dispatch,” the soon-to-be-completed truck will serve as a mobile stage on wheels, making it possible “to play at schools, parks, libraries, wherever,” said Manuel. “I never would have thought of doing something like this.”
The Jazz Loft’s calendar for the rest of the year is mostly back-to-normal. The seventh annual Harbor Jazz Festival takes place September 22-25 and the Loft will run all its regular holiday programming.
“This past year was a step of faith but it’s also a testament to our mission,” said Manuel. “Our patrons and donors were so generous.  It was a tough ask to go back and ask for support when we literally couldn’t give anything back; we were shut down like everybody else. But people gave even more.”
Manuel said donations were up over 50 percent, and a fundraising campaign sent relief checks to unemployed Jazz musicians totaling nearly $15,000.
—  Glenn Jochum & Robert Emproto