Tireless Visionary David Ferguson to be Remembered in Campus Tribute

When Professor David Ferguson, Distinguished Service Professor in the Department of Technology and Society, died last summer at the age of 69, he left behind a legacy that will help pave the way for future generations of STEM students and underrepresented minorities.
A memorial tribute celebrating Ferguson’s life and work will be held on Wednesday, October 2 in the Center for Leadership and Service. 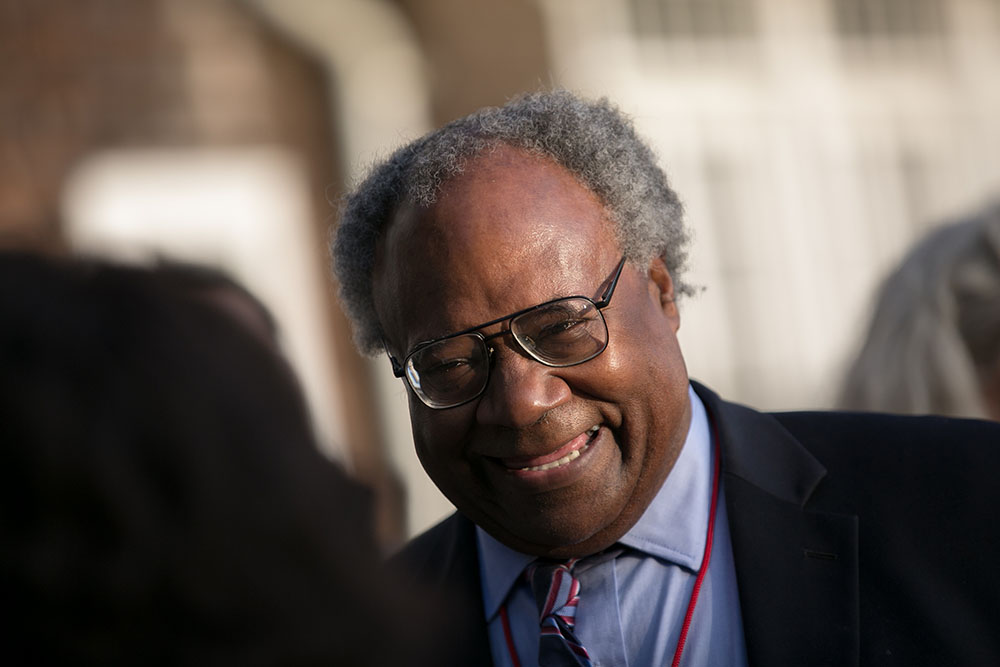 “Dave Ferguson was instrumental in promoting a culture of diversity and inclusion that thrives at Stony Brook,” Interim President Michael A. Bernstein said. “He was the embodiment of a compassionate leader with an unwavering commitment to our campus community.”
A key member of the Stony Brook community since joining the University in 1981, Ferguson became the first African-American assistant professor in the Department of Technology and Society. He later became associate professor and then the department’s first African-American chair.
Also the first African-American valedictorian of his high school in Neelyville, Missouri in 1967, Ferguson’s early academic achievements hinted at a future dedicated to higher education and disadvantaged students. He is remembered by colleagues and students as a passionate researcher, teacher, and mentor whose teaching and research pursuits were intertwined with a focus on issues of quantitative reasoning, problem-solving, decision-making, the use and assessment of educational technologies, technology in mathematics and science, and engineering.
Ferguson developed and oversaw numerous STEM programs for underrepresented minority students, securing millions of dollars in federal and state funds. Most significant among these, according to Fotis Sotiropoulos, dean of the College of Engineering and Applied Sciences, was the Louis Stokes Alliance for Minority Participation, funded by the National Science Foundation (NSF).
“Without it, the university would not be able to compete for other NSF grants in STEM education,” said Sotiropoulos.
Ferguson was both a New York State and national leader in developing programs to enhance the participation of underrepresented minority students in undergraduate and graduate science, mathematics, engineering, and technology programs. From 1998 until 2002, he directed Stony Brook’s Center for Excellence in Learning and Teaching (CELT). Today, more than 100 faculty members and 500 graduate teaching assistants participate in its activities each year. He also cultivated and enjoyed a diverse learning environment where educators, engineers, environmental professionals, and current as well as emerging leaders learned collaboratively. A strong proponent of the power of education, Ferguson also nurtured a keen awareness of the world around him, something he worked to instill in his students. 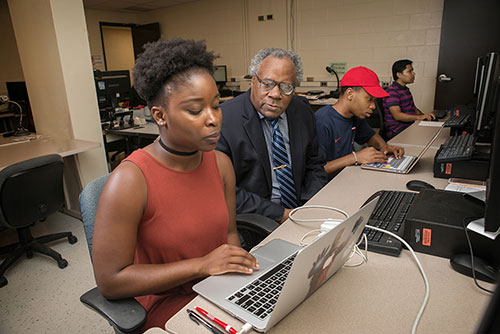 David Ferguson with students in the Department of Technology and Society computer lab.

“It’s important to me not only that I make a connection to the students, but that students make connections to each other,” said Ferguson in a 2010 interview. “I also ask questions and ask students to be reflective and think about other students’ responses to those same questions.”
In 1997, Ferguson became the first Stony Brook University professor to receive the President’s Award for Excellence in Science, Mathematics, and Engineering Mentoring, administered by the National Science Foundation on behalf of The White House Office of Science and Technology Policy. To date, he is one of only two Stony Brook professors to ever earn this distinction; professor David Bynum, founding director of the Center for Science and Mathematics Education at Stony Brook, received the honor in 2003. Reflecting the generosity and dedication that he would be well-known for in the Stony Brook community, Ferguson donated his prize money to student scholarships.
During the past ten years, he took a significant leadership role in developing the campus diversity plan, and in serving as a Provost’s Scholar for Diversity and Inclusion. He was a leader in and out of the classroom, driven by his lifelong interest in building diversity in STEM disciplines, and in securing the federal funding to achieve that goal. Ferguson also worked to bring his passion for education to students abroad, teaching classes and advising doctoral students at SUNY Korea after helping establish its presence.
To Sotiropoulos, Ferguson wasn’t just a larger-than-life figure to the campus community, he was also a role model.
“He was the driver of all we’ve done in STEM education – everything started with Dave Ferguson,” Sotiropoulos said. “He dedicated his life and career to help make things better for students from underrepresented groups. Because of him, many students were afforded opportunities they may not have otherwise had, and many of those students went on to earn degrees and PhDs, become faculty, or go on to other successful careers. Professor Ferguson’s rich legacy will live on through those students and many others.”
A scholarship, created in Ferguson’s honor, will be awarded to a Stony Brook University STEM student from an underrepresented demographic.
— Robert Emproto