A new study by an international team of scientists led by Ellen Pikitch from Stony Brook University’s School of Marine and Atmospheric Sciences (SoMAS), provides the first comprehensive and publicly available database of area-based marine conservation in China’s waters. To be published in Science Advances, the study provides insight into the country’s progress toward meeting global commitments to protect marine waters. Because of China’s global economic and political influence and its status as the world’s top producer and consumer of seafood, the findings could serve to inform broader international dialogue around management of marine biodiversity. 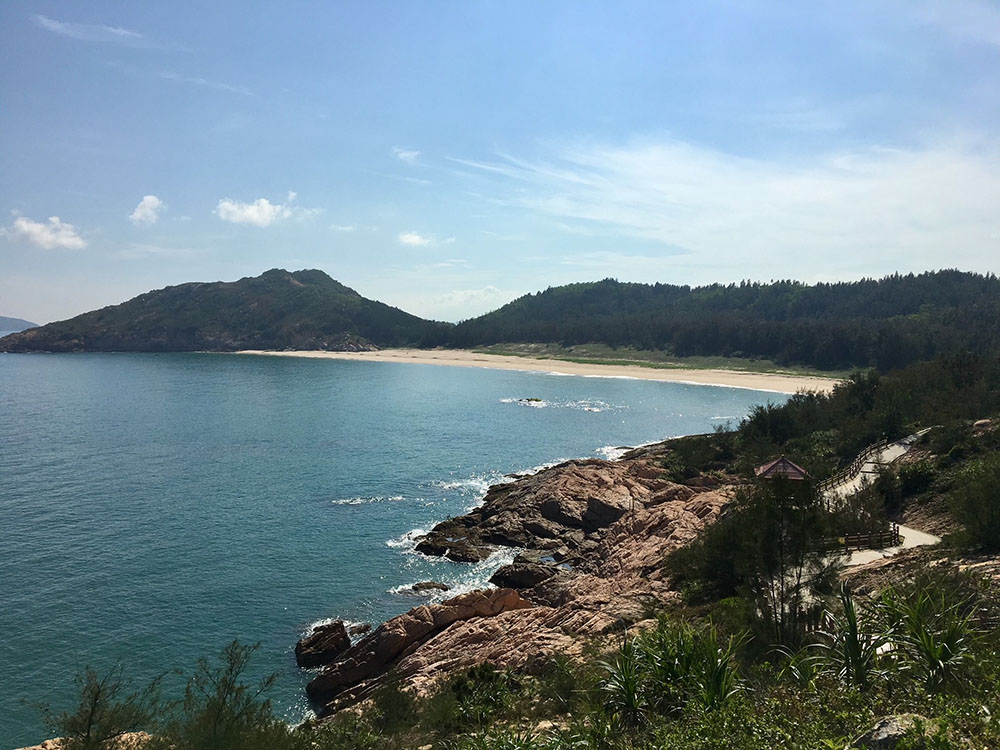 The National Huidong Sea Turtle Reserve in the Guangdong Province is one of the MPAs in China. Credit: Ellen Pikitch

The United Nations, through its Convention on Biodiversity (CBD), set a goal for countries to protect 10 percent of marine and coastal waters within their jurisdiction by way of marine protected areas (MPAs) and other effective area-based conservation measures (OECMs) by 2020. Recently, an international collaboration of scientists, including Pikitch, published a framework for protecting 30 percent of the ocean by 2030.
According to this paper, China has a six-decade history of protecting marine resources within its own borders, but up to this point few details have been available. The researchers developed a comprehensive dataset that includes 326 marine and coastal sites around China, and have made this publicly available.
They found that, overall, nearly 13 percent of China’s seas are protected by a network of MPAs and potential OECMs that address 142 conservation objectives including a variety of species and ecosystems. Twenty-two percent of shallow habitats (less than 10 meters) were considered fully or highly protected and 20 percent of waters 10 to 50 meters deep were conserved, at least to some measure. However, less than 5 percent of China’s deep waters (greater than 50 meters deep), are protected. These deep waters are considered important to protect because they likely contain unique marine life and important fishery resources. Habitats such as underwater canyons and seamounts beyond the continental shelf had no area-based protection.
“Our study may surprise experts and non-experts that despite its large consumption of marine life and other uses of the seas, China has made some substantial progress toward protecting its ocean waters. Yet there is much more work to be done. With the help of international experts in ocean conservation, China can take additional steps to ensure that the full suite of marine life and health of the oceans bordering the country is safeguarded,” said Pikitch, corresponding author, endowed professor of ocean conservation science and director, Institute for Ocean Conservation Science at SoMAS.
Pikitch notes that China’s progress is impressive because of both the substantial area of ocean that is protected and legal strength of that protection, as many of their designated MPAs are fully protected. She also adds that providing a large dataset on the ocean habitats China has safeguarded is valuable to international efforts to secure more MPAs globally, and that the methods the team of researchers used to evaluate China’s MPA network is applicable to other nations and regions.
“The information presented in this paper sheds new light on China’s history of implementing MPAs, a crucial component to furthering efforts to reach global conservation targets,” said Charlotte Hudson, project director for the Lenfest Ocean Program, which funded the study. “We hope that other scientists, resource managers, and marine and coastal stakeholders can use this assessment to inform future protected area planning.” 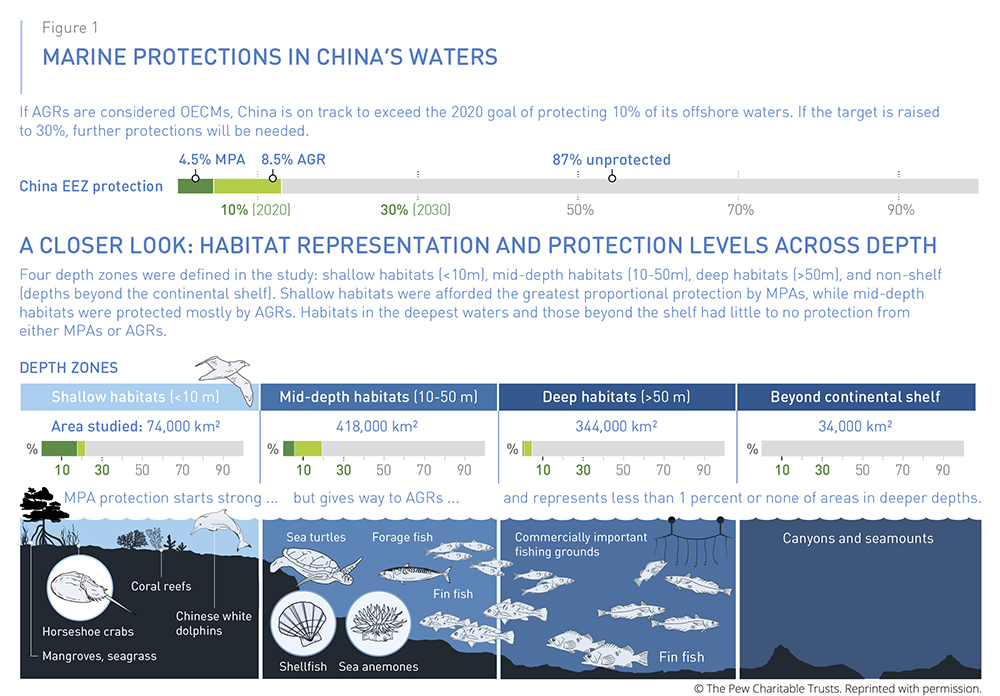 This infographic represents the research team’s categorical approach to assessing marine protection in China, based on habitats and water depth. Credit: The Pew Charitable Trusts

The authors say that the study’s findings and corresponding dataset may help to provide China with future directions for ocean conservation.
China is also the host country for the CBD’s 15th conference of parties, which will conclude in Spring 2022. Targets for biodiversity conservation of the oceans for the next decade are currently being negotiated by hundreds of countries attending the meeting, and more than 100 (not including China) have already endorsed expanding targets to protect 30 percent of the ocean.
In light of current and potential future goals, the authors suggest China may strengthen its nationwide marine conservation network by expanding protection in habitats and ecosystems that have been underrepresented to date (e.g., in deeper tropical waters), strengthening the level of protection in areas with less restrictive MPAs, and continuing to fortify protection in especially important ecosystems like mangrove forests and seagrass beds. The country may also benefit from developing long-term monitoring programs to understand management impact of MPAs beyond just numerical goals.
The research to develop the dataset about China’s protection of the ocean was supported by the Lenfest Ocean Program.