Student Researcher Mary Bertschi ’19 is at Home in the World

“I feel like if I had been in a different school or a larger department I wouldn’t have had the connections I have had, or found out about the internships and experiences I have enjoyed,” said Mary Bertschi ’19, who loves the “small-town feel” of the School of Marine and Atmospheric Sciences (SoMAS) at Stony Brook University.
Ironically, that small-town feel ended up carrying the Long Island native far beyond the North Fork. As an undergraduate, she conducted research on fishery health in the Peruvian Amazon as well as a comparative analysis of microplastics in sediment between the east and west coasts of Madagascar. 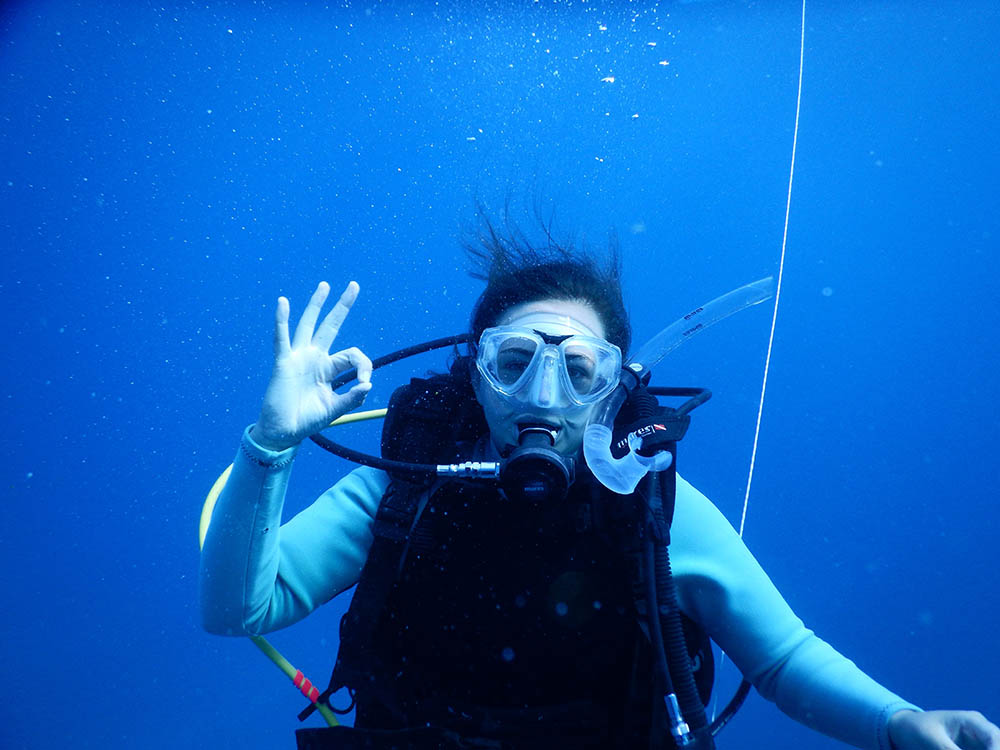 “Going to Madagascar was something I never in a million years expected I would be able to do, let alone be able to spend three months living there as part of my coursework,” Bertschi said.
“One of my favorite memories is of camping in the protected Maromizaha forest, one of the areas where you can find Indri, the largest of the lemur species,” she said. “They have a super unique call, that to me sounds almost like a whalesong. For nearly a week, we would wake up at dawn to the song of the Indri and spent the day studying their behavior. It was surreal.”
More recently, Bertschi ventured to the Peruvian Amazon to conduct research with a fellow undergraduate student, Courtney Stuart ’19, and two Stony Brook professors, David Taylor and Maria Brown. “It was the first time I ever conducted research start to finish and we began every day with a predawn birding excursion,” she said. “I’ve never been anywhere that even comes close to how wild and diverse the Tamshiyacu-Tahuayo reserve is.”
These experiences, and her findings, have come with a price: the realization that human activity has severely compromised the ecosystems she visited.
“Particularly in Madagascar, the impact commercialization have had on the environment is severe,” Bertschi said. “Only about 12 percent of the primary forest cover remains and the country has lost about 80 percent of its original forests.”
“In a similar vein, the Amazon faces threats from changes in the hydrological cycle,” she said. “Certain animals such as the river otter, that time their reproductive cycles to the normal wet and dry seasons, are being adversely impacted by the changes.” 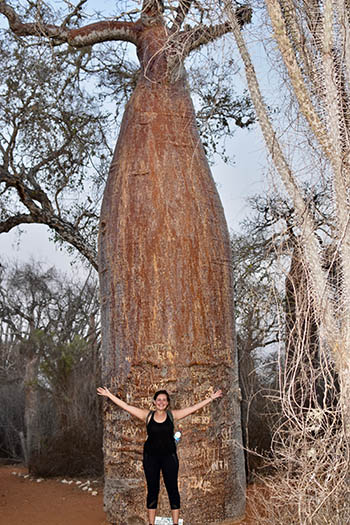 Bertschi in Madagascar under the bilbao tree

Nevertheless, Bertschi remains hopeful that it is possible for humanity to make strides in reversing the environmental damage as her generation embraces sustainability and a green revolution.
“So much feels outside my control but I try to do what I can,” she said. “Bringing a reusable water bottle around or saving to-go containers may not seem like much but these small changes can make huge impacts! I buy coffee three or four times a week and always have my own mug. If you tally all of the coffee cups up that I personally would have thrown away in half a year that’s about 100 disposable cups. If everyone is committed to making similar swaps it would go a long way to tackling a major issue.”
Bertschi is also a firm believer in practicing “citizen science.” In 2017, she participated in a Horsehoe Crab Monitoring internship offered by the Peconic Estuary Program, gathering environmental and biological data and conducting weekly public outreach.
Always a hands-on scientist, Bertschi relished her experience interning for the Peterson Lab at the SBU Marine Center, where she spent most of her days on the bays snorkeling and aboard research vessels. SCUBA diving recently in Zanzibar exposed her to macro diving, “where everything you see, from beautifully colored flatworms to incredibly tiny crabs, is really small.”
A double major in marine vertebrate biology and Ecosystems and Human Impact set to graduate in December, Bertschi has applied for internships in Ireland and Greece and is working on a Fulbright application to teach English. “I think I’ll wind up leaning more toward the environmental education aspect, because I really do enjoy talking to people about conservation and marine biology. Eventually I’ll go back to school for a masters but right now I want to get out in the world and travel a bit until I find out what I am most passionate about,” she said.
— Glenn Jochum