Tamara Smith ’21 chose Stony Brook for its “beauty and welcoming aura” and stayed for the opportunities it offered. 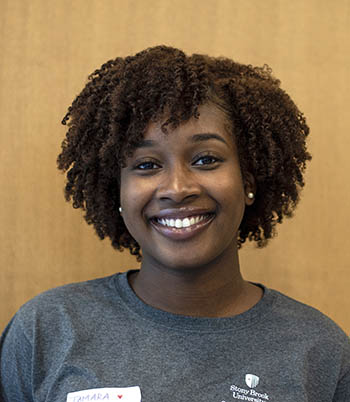 “Stony Brook has exceeded my expectations in terms of the number of opportunities available and the tools I could acquire to make more opportunities for myself,” Smith said. “At first I thought it might be difficult to make a difference on a campus with so many people, but with the right professors, supervisors and mentors, I was able to identify and immerse myself in things I am passionate about.

An economics major with a minor in political science, Smith became an intern with the Center for Civic Justice in Fall 2018. During that time, she registered thousands of students to vote, emphasizing the need for civic engagement through the University’s Community Dialogues.

“Community Dialogues are opportunities for students, faculty, staff and other community members to come together to develop a comprehensive, better informed understanding of our nation’s most pervasive issues,” Smith said.

Led by a moderator at each table, a group of eight to 12 students discusses topics presented by the National Issues Forums, a nonprofit, nonpartisan network of civic, educational, and other organizations and individuals whose common interest is to promote public deliberation in America. The group also discusses drawbacks and proposes solutions to each problem.

“Actively engaging in dialogue with one another and coming to a consensus on how we can fix these issues is an important part of civic engagement,” Smith said. “Dialogue is the first step before taking action and advocacy; some students come into the events not knowing anything about the topics, and it’s always enlightening to see them not only form their own opinion and perspectives, but also to listen to the opinions of others with respect and an open mind.”

Smith soon learned how to interact with students who initially resisted engagement.

“There were occasional cases when students expressed their dislike for or disinterest in politics,” and that led to an aversion to voting, she said.

“We would never force anybody to register — or bash their opinion — but rather try to get to the root of why they feel like politics is a burden. One method I utilized was asking students what they’re passionate about and what change they would like to see in the world, using that as a starting point for involving themselves in civic engagement. Although everyone might not be ‘political,’ everyone has issues they are passionate about and more often than not, the issue is embedded in politics.”

Smith worked toward bringing the efforts of the Southern Poverty Law Center, a nonprofit legal advocacy organization that promotes diversity and tolerance, to the Stony Brook campus. She is also a Vote Everywhere Ambassador for the Andrew Goodman Foundation. Vote Everywhere partners with the Andrew Goodman Foundation to tackle voter registration initiatives and promote civic engagement. Smith and other ambassadors use tabling efforts around campus as a method to engage students.

“We always offer the opportunity for students to register to vote and check their voter registration status and/or change their address and political party,” she added. 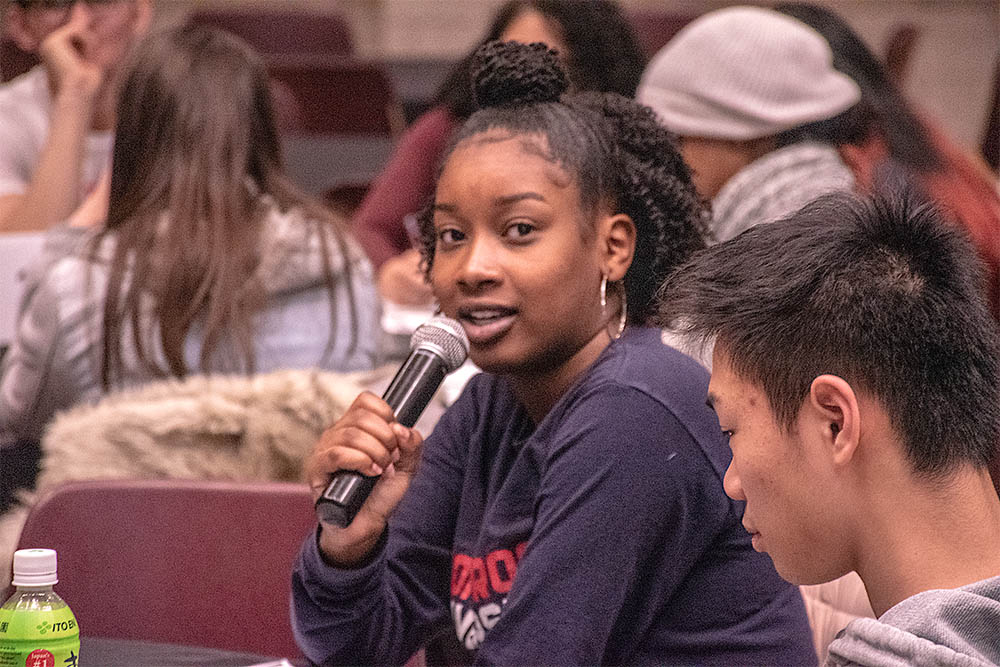 Her duties as Black History Month co-chair included working with other co-chairs and committee members to sculpt a theme called Owning Your Own Narrative — which lends power to those whose history has been written for them based upon stereotypes and prejudice — and choosing guest speakers and events that embodied that theme.

“Throughout my life, I have heard stereotypes criticizing my intelligence, physical features and even my family,” said Smith. “This is what inspired me to host my event, Thinking Outside the Box, for Black History Month.”

With Owning Your Own Narrative, Smith took an opportunity to highlight certain individuals in history, such as actress Hattie McDaniel, who was criticized for her role as “Mammy” in Gone With the Wind.

“After portraying a role that was seen as demeaning to so many women of color, she then took these circumstances and dedicated it to community service and the fight for equality,” Smith said.

Smith said she decided to join the Caribana dance team because she is proud of her Caribbean culture and felt that one way to express herself was through dance.

“I joined the Student African American Sisterhood in May 2019 and have been grateful for the opportunity to gain mentorship and guidance as an underrepresented female student in a predominantly white institution,” said Smith. “The Student African American Sisterhood National Organization Inc. is a high school and collegiate nonprofit organization dedicated to supporting the personal and professional development of young women of color. As a member, I have attended meetings, events and workshops that focus on professional and personal growth to help me succeed during and beyond Stony Brook.”

Smith also serves as treasurer of the National Black Law Association, a club that she formed with three other women of color who are hoping to attend law school but are concerned there isn’t enough representation for minorities in the law field.

“This club is not only intended to inform students about the process of applying to law school, but also the tools and resources necessary to support their journey,” she said.

“I got to speak with him briefly and also had the opportunity to present him with a few gifts on behalf of the Black History Month Committee, Smith said. “Mr. Lee overcame any shortcomings he faced in his life, making him a clear example of the embodiment of owning your own narrative.”

This summer Smith is working with the Progressive Pipeline fellowship with college students across the country to organize and advocate in her community. She also will volunteer with the Working Families Party.

Smith was born and raised in Brooklyn, New York, and moved to Queens when she was 10 years old. The daughter of two immigrant parents, she remembers her mom working full time, earning a master’s degree and still being able to take care of three children without missing a beat.

“My mom always reminded me that I should never be content with being unheard and that my voice has power,” said Smith. “I took this and applied it to every aspect of my life, from running for senior class president in high school to encouraging and advocating for civic and community engagement here at the University.”