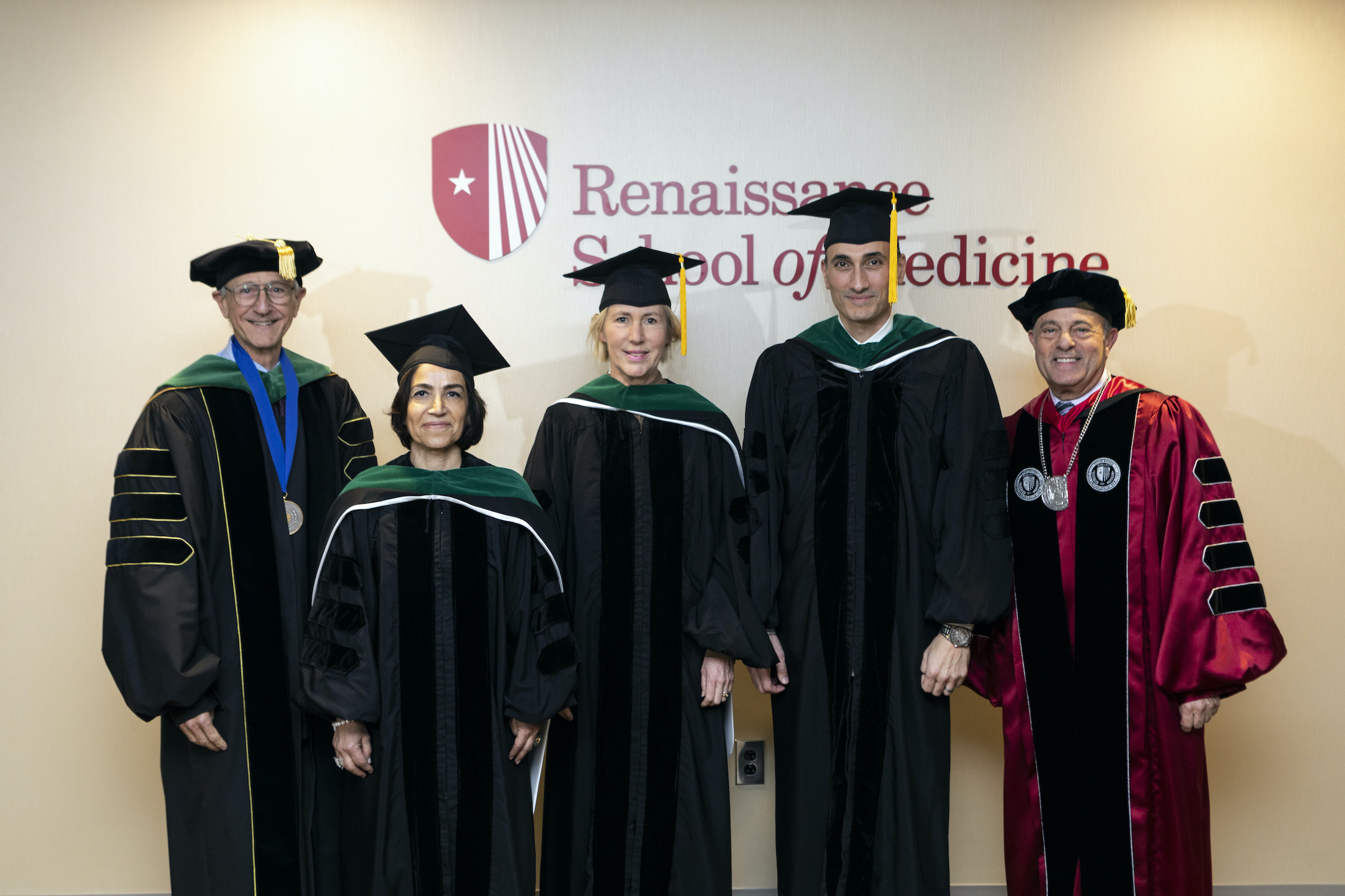 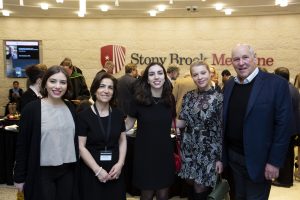 Endowed Chair in Psychiatry; Henry Tannous, MD, as the General Ting Feng Cheng Endowed Chair in Cardiothoracic Surgery and Ute Moll, MD, as the Renaissance Endowed Professor in Cancer Biology.
During his remarks, Interim Stony Brook University President Michael A. Bernstein recognized the many benefactors in the audience — all local families connected to Renaissance Technologies —who established the endowed positions.
“You understand that the very best scholars want to pursue discovery and innovation at an institution that provides them with the resources to re-invent the future,” said Bernstein. “And it is your incredible generosity to the Renaissance School of Medicine — and elsewhere across campus — that has allowed us to recruit or retain the three eminent faculty being invested tonight.”

Tackling The Mysteries of the Brain that Lead to Better Treatments

Robert Lourie and alumna Ivana Stolnik ’16 funded the Lourie Endowed Chair in Psychiatry. The inaugural holder of the chair, Dr. Abi-Dargham, is an internationally recognized leader in molecular imaging of the brain functioning related to schizophrenia and concurrent addiction.
“I believe that understanding the brain is as significant a scientific challenge for this century as understanding the atom was for the last,” said Robert Lourie. “Dr. Abi-Dargham’s research on the fundamental pursuit of the brain’s molecular impact also paves the way for better clinical  treatments of patients, representing the best synergy between basic and applied science and we’re all very glad she’s here at Stony Brook to do this work.”

“There is no doubt that as the Lourie Endowed Chair in Psychiatry Dr. Abi-Dargham’s contributions to science will continue to grow, further advancing Stony Brook’s storied reputation for excellence in imaging,” said Senior Vice President of Health Sciences and Dean of the Renaissance School of Medicine, Kenneth Kaushansky, MD, MACP. 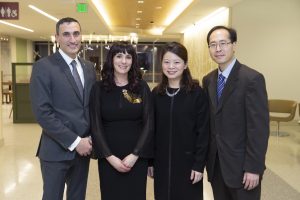 Stony Brook alumni and Medicine Advisory Board members Carol Cheng ’96, ’97 and Eugene Cheng ’97 created the General Ting Feng Cheng Endowed Chair in Cardiothoracic Surgery. The clinical practice of the holder, Dr. Henry Tannous, encompasses coronary revascularization and valvular heart surgery, including transcatheter interventions and minimally invasive lung cancer surgery. In the research realm, he focuses on the early-stage treatment of lung cancer, leading a collaborative effort to reduce lung cancer death rates through early detection and treatment.
Eugene Cheng explained why he and Carol Cheng established the General Ting Feng Cheng Endowed Chair. “My wife and I chose to name this endowed chair after my grandfather. He was a general in the National Revolutionary Army of China who gained prominence during a tumultuous era. He devoted his life to his country. He passed away in 1961, a casualty not of war, but a heart attack,” he said. “I never had the chance to meet my grandfather. Through this endowment, with the help of Dr. Tannous and Stony Brook University Hospital, we wish to make a difference in the battle against heart disease so that future generations might know their grandparents.”
“Dr. Tannous has been critical to our success in achieving a national three-star rating from the Society of Thoracic Surgeons,” said Dr. Kaushansky. “As the General Ting Feng Cheng Endowed Chair in Cardiothoracic Surgery, Dr. Tannous will continue his remarkable successes as surgical director of our structural valve program and fostering clinical collaborations across campus and in the New York metro region.”

The inaugural holder of the Renaissance Endowed Professorship in Cancer Biology, Dr. Ute Moll is vice chair for experimental pathology at the Renaissance School of Medicine and is internationally recognized for her work in cancer pathogenesis and therapeutics. Her landmark work, focusing on how cancer evolves and how cancer cells respond to many existing treatments to help predict which types of cancers will respond best to particular treatments, captured the attention of nine local Renaissance Technologies families.
Stanko and graduate alumna Nicole Barle’16; Michael and Victoria Bershadsky; Sergey Butkevich and Irina Gulina; Michael and Nina Douglas; Tomislav and graduate alumna Vesna Kundic ’05; Robert Lourie and alumna Ivana Stolnik ’16; Mark and Jane Metzger; Vladimir and Elena Sadov; and Francesco and Judith Scattone — inspired by the groundbreaking research in progress at the Stony Brook Cancer Center — created the Renaissance Endowed Professorship in Cancer Biology. 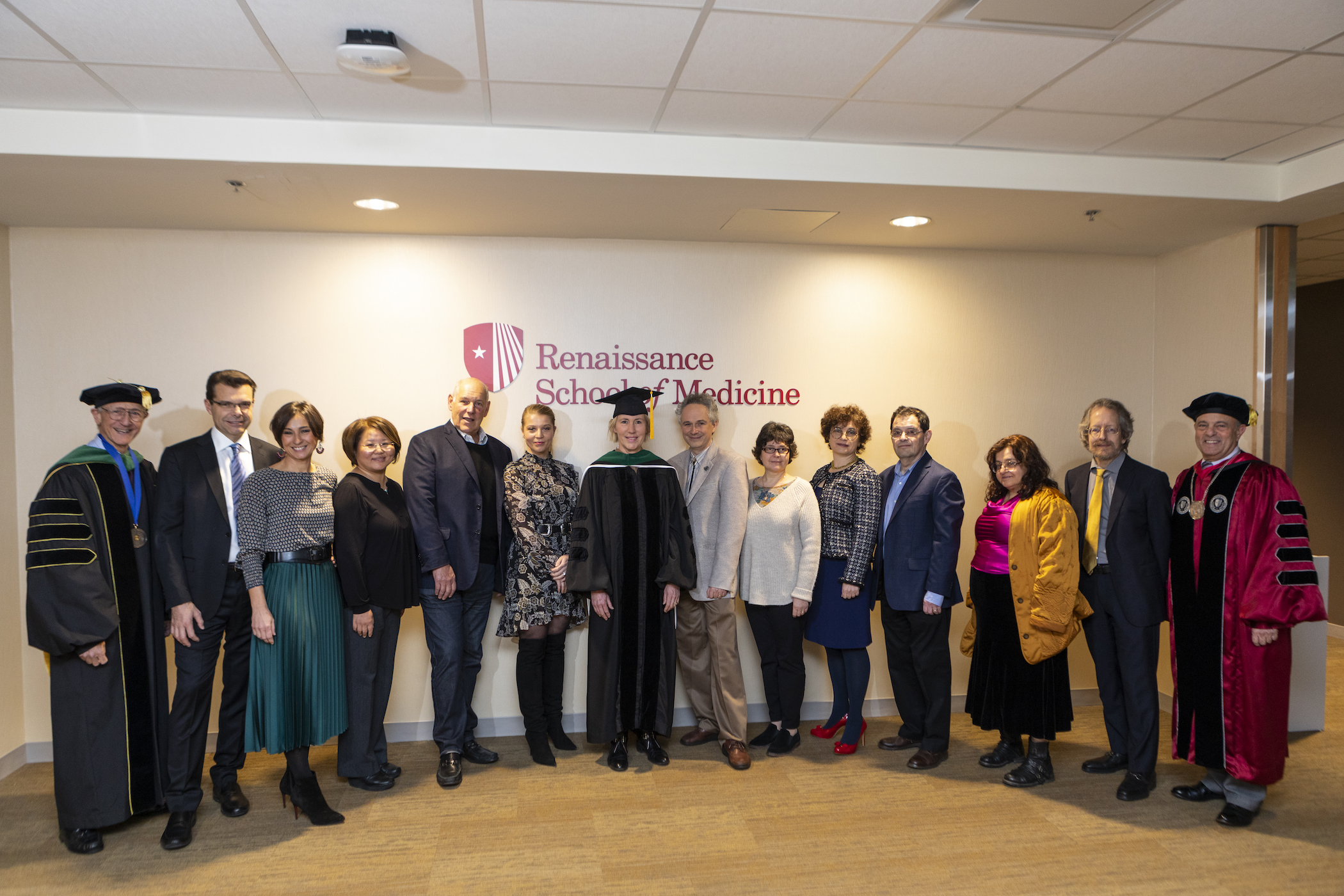 On behalf of fellow investors, Sergey Butkevich said, “At Renaissance, we’re all scientists, so we all believe in the correlation of research and knowledge. Many of us have been affected by cancer, which makes you feel completely helpless. So in a small way, we are doing what we can so that we can at least imagine a time when cancer will be an easily manageable disease. It’s our hope that through Dr. Moll’s research, we will be able to get closer to that moment.”
“As the Renaissance Endowed Professor in Cancer Biology, Dr. Moll is building upon the exceptional strengths of Stony Brook Medicine and Stony Brook University in applied mathematics, biomedical engineering, and chemical biology said Dr. Kaushansky. “The endowed professorship will be a centerpiece for Stony Brook’s premier cancer biology lab, and will help our Cancer Center achieve National Cancer Institute (NCI) designation, which will generate more funding and support for this vital work to advance our understanding and treatment of cancer.”
Endowed chairs and professorships create a multiplier effect, said Interim President Bernstein, impacting the caliber of faculty and students on campus, the quality of research in its labs, and ultimately the untold number of people who benefit from the new knowledge created, treatments and drugs developed and lives saved.
In his final words to the endowed faculty benefactors, Bernstein said, “How lucky Stony Brook is — how lucky our extended community is — for your friendship and your partnership.”
To view more photos, please visit the Flickr album for the event.