Stony Brook to Graduate More Than 7,500 in May 24 Commencement Ceremony

Eager to embrace a challenging but rewarding future, a record 7,535 Stony Brook University graduates will be honored as the University’s 59th annual commencement ceremony takes place  Friday, May 24, beginning at 11 am in Kenneth P. LaValle Stadium. 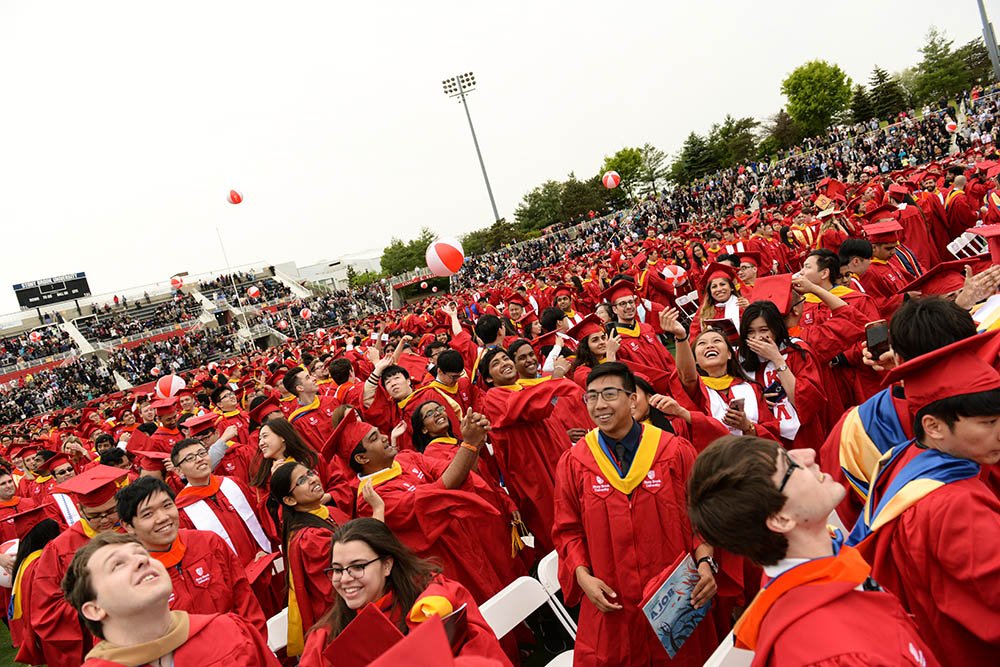 Actor and polymath Alan Alda, Me Too Movement founder Tarana Burke and Crittercam inventor Greg Marshall will receive honorary degrees, President Samuel L. Stanley Jr. has announced. Degrees for Alda and Burke will be conferred on May 24, while Marshall will receive his degree at the Doctoral Hooding ceremony on Thursday, May 23.

The University will confer an estimated 4,500 bachelor’s degrees, 2,245 master’s, 630 doctoral and professional, and 250 certificates in various ceremonies across the campus. 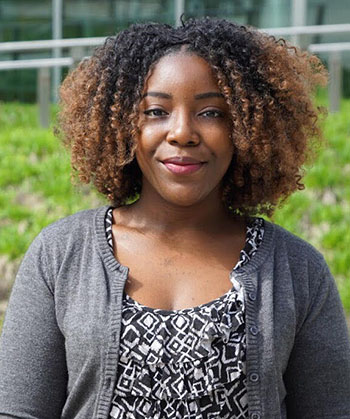 The Commencement speaker will be T’Kheya-D’Vrehy Yisrael, well-known on campus as a role model, visionary and student leader dedicated to the University and her peers.
T’Kheya, a biochemistry and sociology double major, received the Dr. William McAdoo Memorial Scholarship from Stony Brook University’s Office of Institutional Diversity and Equity earlier this year. She has served in a variety of leadership roles in campus clubs and organizations. She is a Senior Resident Assistant, a Marketing & Communications Assistant for the Faculty Student Association (FSA), President of Pi Delta Chapter of Delta Sigma Theta Sorority, President of the Black Student Union, President of the Black and Brown Caucus, a member of the Student African American Sisterhood, and LinkedIn ambassador.
She volunteers at the campus food pantry and helps out with the My Sister’s Keeper initiative to create “Love Lunches” to provide the less fortunate with food, clothing and hygiene products in the NYC area. She served on the University Diversity Plan Undergraduate Working Group, Student Diversity Leadership Council, Student Advisory Council and the University Scholars’ Scholarship Committee.

About the 2019 Honorary Degree Recipients 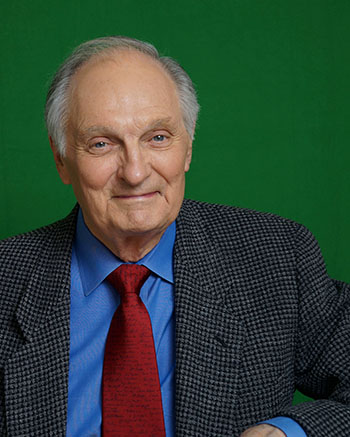 Alan Alda is an award-winning actor, director, screenwriter, author, and advocate for science communication and women’s rights. He has earned international recognition for his multitude of accomplishments, has earned seven Emmy awards, and appeared in many well-known television series and films. In one year alone, he was nominated for an Oscar, Tony, and Emmy and wrote a best-selling book. In addition to Alda’s achievements in the performing arts, he is an active women’s rights advocate and has a great passion for science communication. He has worked to support equal rights for women and to help broaden the public’s understanding of science. This includes hosting the PBS award winning series, Scientific American Frontiers, and running the international Flame Challenge. In 2009, Alda brought his experience and passion for science to Stony Brook University, helping to found the Alan Alda Center for Communicating Science. The Alda Center has become a global leader in communication training and research and has trained more than 12,000 scientists and health professionals. Alda has received many prestigious awards for his work in science communication, including the Scientific American Lifetime Achievement Award. Through his work at the Alda Center, Alan Alda continues to inspire scientists and health professionals in the Stony Brook Community and around the world.

“Thanks to Alan Alda, Stony Brook has emerged as a powerful advocate for science communication. His curiosity, his passion and his enthusiasm are infectious; indeed he has inspired a whole generation of scientists with his visionary approach to changing how we talk about our work,” President Stanley said. “For his advocacy of women’s rights, his incredibly diverse career in television, film and theater, and for his ability to connect the worlds of art and science in ways no one has before, we are truly excited to confer a Doctor of Fine Arts upon Alan Alda at our graduation ceremony in May, where he will join the class of 2019 and more than 150,000 graduates around the world, as an alumnus of Stony Brook University.” 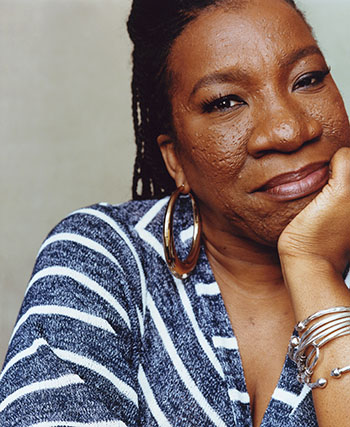 Tarana Burke is an African-American civil rights activist, widely known for originating the “Me Too” movement to raise public awareness of sexual abuse. While this movement has gained recognition over the past year, Burke independently launched the “Me Too” campaign more than ten years ago to help underprivileged women of color who may have been affected by sexual abuse. In 2017, the popular hashtag #MeToo quickly went viral over social media, following a worldwide response to the flood of sexual misconduct allegations in the entertainment industry. This public reaction was both illuminating and empowering as it helped and continues to help shape public consensus toward intolerance of sexual abuse. The Me Too Movement has given women and men from all walks of life the courage to come forward and share their stories with the hope of promoting change and preventing further victims of sexual violence. As part of Burke’s activism, she also serves as the Senior Director of the Girls for Gender Equity (GGE) in Brooklyn, which strives to help young girls and women of color, ranging from ages 8-19, increase their cognitive and social development through focused interventions. GGE offers programs that improve strength, skills, and self-sufficiency in girls to help guide them in making meaningful choices in their lives.

“The movement Tarana Burke created has significantly influenced the way in which people understand sexual assault,” President Stanley said. “The powerful message that she offers through her activism has given men and women throughout the world the courage to speak out, with hope of prevention and change. For this and all Tarana has contributed to our society, we are veryy proud to be able to confer upon her a Doctor of Humane Letters.” 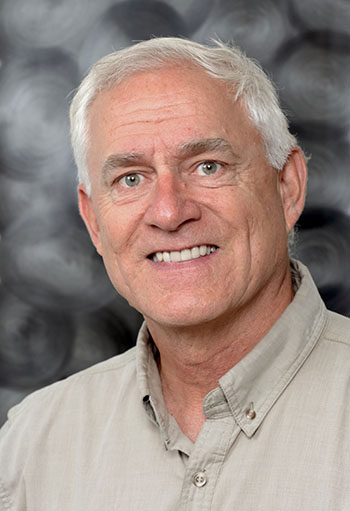 Greg Marshall is known internationally as a leading animal conservationist, serving as a National Geographic Research Associate. Marshall earned his master’s degree in marine science from Stony Brook University in 1988. During the course of his career, Marshall inspired millions of people worldwide through his 1986 invention of the Crittercam.

The Crittercam is a small, lightweight camera that can be mounted directly on an animal in the wild. This non-invasive technology allows humans to experience the world through the animal’s perspective. It provides access to the animal’s surrounding environment, such as temperature, light level, depth of the ocean and direction in which the animal is heading.

Most National Geographic television specials that feature a look through the inhabitants’ eyes use Marshall’s Crittercam invention. Marshall is a two-time Emmy Award winner. He has developed, produced or otherwise been closely involved in more than 70 National Geographic documentaries that include the observation of sea lions, sharks, bears, penguins, turtles, lions, and monkeys. Additional contributions include more than 60 short films airing on PBS. Marshall’s films are known to be visually engaging while communicating fundamental principles of biology and a strong conservation message.

“Greg Marshall literally changed the world with his Crittercam invention,” Stanley said. “As a result, we have a much clearer understanding of our planet and the species we share it with, so we are incredibly proud to confer upon him a Doctor of Science. Greg is living proof of how a Stony Brook experience makes a real difference and that we should follow our dreams because no idea is too big or too small when it comes to entrepreneurial spirit.”