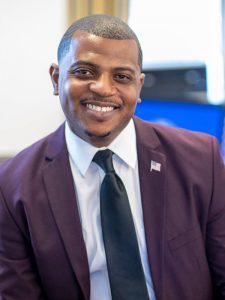 The theme of Stony Brook University’s Black History Month (BHM) celebration in February was “SANKOFA! Social Activism,” highlighting the historical legacy of that experience in the struggle for equality, inclusion, social change and social justice.
“This year’s theme reflects both the historical triumphs and the bravery and fearlessness of African Americans,” said Stony Brook President Maurie McInnis in her remarks at the BHM opening ceremony. “Stony Brook and the world at large owe much to the Black activists that have fought for social reform and who have been brave enough to speak out against injustice.”
It’s a call this year’s BHM keynote speakers — alumni Franck Joseph ’12 and Michelle Mbekeani ’11 — have been following since graduating from Stony Brook.
Joseph, who delivered the keynote at the opening ceremony, discovered a passion for activism while he was still a high school student in Brooklyn, when he realized he had a gift for leading and organizing.
“When I started thinking of what I wanted to do for the rest of my life, it made me start thinking about what I want the world to look like,” he said. “I was a leader on my football team, on the track team, in my extracurricular activities, and in my house of worship, and I was also a good public speaker. So I thought, ‘who are people who lead and talk a lot?’ People in government.”
Soon after graduating Stony Brook, Joseph attended a community meeting and met his local representatives. Congressman Gregory Meeks from New York’s Fifth District was immediately impressed and offered Joseph an opportunity to intern. The experience introduced him to the world of public service and would prove transformational. From there, he connected with Queens Borough President Donovan Richards, serving two years as his spokesman and district manager, and another year as chief of staff and senior advisor. He also served on the New York City Commission on Human Rights, rising to the position of deputy commissioner.
Joseph describes his experience at Stony Brook as positive and supportive. A self-described student of history, Joseph sees history repeating itself in many of today’s social struggles, as he is reminded of the civil rights movements of the 1960s and the economic crisis of the 1920s.
“I’m reminded of all these pivotal times in history that seem to be coming together today,” he said. “Young people are very important to this moment. They are the emerging generation, and I hope that they take a step back and put themselves in another person’s shoes, because it’s easy to hear one side of the story and believe it, but it’s also important to think about your neighbor.”
Mbekeani delivered the keynote at the BHM closing ceremony, and said activism is something that drives her work every day.
“It’s an internal fire in me that inspires hope that one day the experiences of Black people in America and throughout the world won’t be dictated by the color of their skin,” she said in her address. “I was really excited to see that this year we’re focusing on social activism for Black History Month. Those concepts and principles are what get me up every morning.” 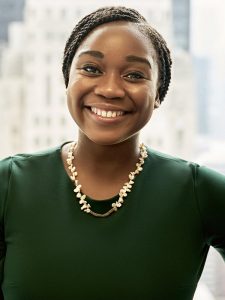 Like Joseph, Mbekeani was inspired to head down her future path at a young age. As she got older, she noticed that a lot of politicians and presidents she admired were lawyers, which she is today, currently serving as senior legal and policy advisor for justice reform in the Cook County State’s Attorney’s Office in Illinois. In this role, Mbekeani has worked tirelessly to advocate for equality and law enforcement reform.
“It’s interesting that when we describe current events, it’s described as ‘racial crisis,’” she said. “When you look at the definition of ‘crisis,’ it’s defined as a departure from the norm. What we’re seeing is not a departure from the norm. We’re so shocked this is happening in America. This has always been here, it’s just being documented now. People can record it on a phone and send it into the world with a click.”
As she closed her keynote speech, Mbekeani had strong words of encouragement for students.
“Don’t let anyone make you feel like you’re not qualified because of your age or your experience,” she said. “There’s so much wisdom in your life experience, more than you would ever expect. Don’t shy away from having your voice heard. It’s easy to feel that you can’t speak up, as a Black people and especially as a Black woman. Do it anyway.”
Joseph said that for him, social activism is about bringing people together for change in society. “The question is, will that change move us forward or backward,” he asked. “It’s not that seats at the table have been lost, it’s that we have to create a bigger table.”
— Robert Emproto