Spirit of Stony Brook Band Marches On Through Pandemic

The mission of a marching band is to drive excitement and build a sense of solidarity — a nearly impossible feat without an audience.
When the COVID-19 pandemic hit in March, audiences disappeared. Lacking the traditional performance opportunities, the Spirit of Stony Brook did what any dedicated band would do. It marched on.
To accomplish that, sustaining some sort of continuity was key, according to Justin Stolarik, director of Athletic Bands at Stony Brook.
“We maintained the same ‘rehearsal’ times during the semester as we usually do,” he said. “But instead of rehearsals, we had weekly seminars on special topics, such as teaching and leadership fundamentals, as well as the basics of score reading, conducting and arranging.”
Stolarik also took the opportunity to have his students study the “art” of the marching band, something that would not be possible under normal conditions. 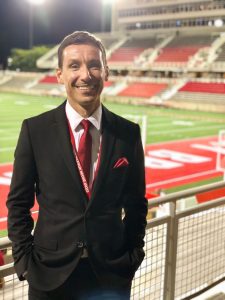 “We looked at all 64 NCAA Division 1 marching bands, 22 marching bands from HBCUs (Historically Black Colleges and Universities), the famous Texas A&M military-style band, and 30 drum and bugle corps,” he said.
Other projects included listening exercises, interviews with other music directors, and opportunities to submit performance videos from home for a virtual pregame show, which will be released this spring.
In Spring 2020, the band continued the usual student leadership team and drum major selection, put on a virtual spring concert, and held its annual band banquet virtually. During the final rehearsal before Spring Break, on March 13, Stolarik made a last-minute decision to record as much of rehearsal as possible in case the annual spring concert scheduled for April was canceled. The decision proved prescient: it was.
“Using this footage, the band put together a full virtual concert that we rolled out over a 15-day period in April, leading up to the originally announced date of our concert,” said Stolarik. “It gave us an opportunity to show our fans the fantastic work our band had done since August.”
Stolarik said that while it was difficult to watch incoming freshmen miss out on their first taste of the excitement of a Division I environment, it was especially heartbreaking for the seniors.
“This was going to be their last time on a football field,” he said. “It was all out of everybody’s control, but that doesn’t make it any less challenging.” 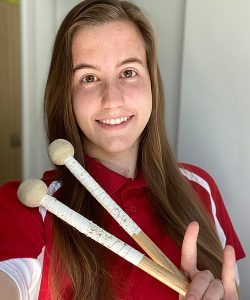 Biology major and bass drummer Julie Micko ’21 is one senior whose last year in marching band will be almost entirely online.
“I had really been looking forward to finally getting to take part in the senior traditions that I’ve seen my friends go through, and not getting to do those and be with everyone in person has been rough,” she said. “But we put together a fun spring concert experience and I feel like I learned a lot despite being fully remote.”
Stolarik is looking forward to the possibility of playing at football this spring, which would provide a final performance opportunity for seniors. He also points out an interesting oddity.
“This coming August will be new for our second-year members, just as it will be for the new first-years,” he said. “It will be like having two classes of first-year members. Because of that, we’ll be depending heavily on our returning juniors and seniors to help continue all the band traditions that have been built since 2006.”
Through it all, Stolarik has managed to find a silver lining. “Although we’re all very tired of Zoom meetings, one significant thing it allowed us to do is to reach folks who are not on campus,” he said.
Last summer, Stolarik hosted weekly Wednesday night recruitment Q&As via Zoom.
“Usually we have a limited number of times to meet prospective students in person during July orientations,” he said. This year, he began meeting prospectives in May and has been Zooming into high school band rooms. “I can definitely see continuing the use of technology in this way.” 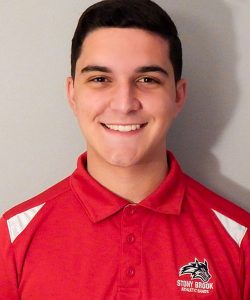 Stolarik said he’s most looking forward to seeing his band in person and watching the members interact and socialize again. Junior Nicholas Manzella ’22, a physics and mathematics major who plays trombone in the band, concurred.
“I hope that our spring season will allow us to return to in-person rehearsals in a safe manner, as we currently have planned,” he said, calling performing one of his favorite escapes. “Nothing compares to being together and making music, and I look forward to the day when the band can return in person to continue to brighten the days of those in the Stony Brook community.”
Manzella was fortunate, along with Micko and psychology major Adena Assawakulpaibool ’22, to participate in the College Band Directors National Association Intercollegiate Marching Band, which brought together 200 colleges and universities and nearly 1,500 marching band students from 45 states and Puerto Rico, to perform virtually for the College Football National Championship. The performers recorded their music and routines individually, and the final video was compiled and shown at the championship game.
“It felt great to get a new piece of music to learn and to put on my uniform and instrument again for the recording,” said Micko. “Just getting to do that brought back some of the joy that I remembered from halftime shows during football seasons prior.”
The Intercollegiate Marching Band experience was fun and interesting, said Manzella, especially talking to members of other bands from around the country. “We were able to exchange stories about how our universities and bands have handled band in a pandemic,” he said.
For Stolarik, August will be a time for his band to relearn marching fundamentals and routines and get back to performing at campus events in front of fans.
“Normalcy,” he said, “cannot come soon enough.”
— Robert Emproto