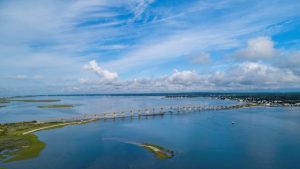 Shinnecock Bay has been named a global Hope Spot after successful restoration efforts over the past decade. Photo credit: Christopher Paparo/Fish Guy Photos

Shinnecock Bay is being named a new “Hope Spot” by Mission Blue, an international organization that supports the protection of oceans worldwide. The distinction is the result of a decade of restorative and scientific work co-led by Ellen Pikitch, Christopher Gobler and Bradley Peterson in Stony Brook University’s School of Marine and Atmospheric Sciences (SoMAS).

Hope Spots are iconic ocean regions that stand out as some of the most pristine on the globe. This places Shinnecock Bay, located on the East End of Long Island, in a league with internationally recognized locations such as the Galapagos Islands, the Sargasso Sea and the Ross Sea in Antarctica. The bay is the first Hope Spot in New York State, the only one near a major metropolitan region and one of only three others on the U.S. Eastern Seaboard. 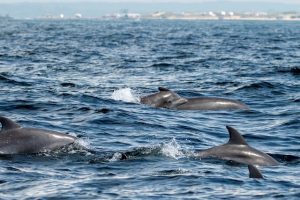 Sylvia Earle, founder of Mission Blue, said, “What a concept, in the shadow of one of the most densely populated parts of the planet — New York City! While New York conjures up visions of skyscrapers and crowded streets, it is a great ocean state with a significant coastline, a rich maritime heritage and growing opportunities to view ocean wildlife from the shores and in the water.”

Mission Blue and its founder, the internationally renowned marine biologist Sylvia Earle, officially named Shinnecock Bay as a Hope Spot on June 6 in an event at The Explorers Club in New York City. Pikitch, on behalf of the Institute for Ocean Conservation Science, nominated the bay for this global recognition, and Ted Janulis, on behalf of The Explorers Club, served as second nominator.

The Explorers Club acknowledged the work of Pikitch and her colleagues at SoMAS, where a team of scientists, educators and students have worked together to revive the health, biodiversity and aquaculture potential of Shinnecock Bay.

“The Hope Spot distinction for this unique bay on Long Island is the result of meticulous work and proof that the Shinnecock Bay Restoration Program has succeeded in bringing  the bay back to the healthier state it was in many decades ago,” said Pikitch, endowed professor of ocean conservation science and director of the Institute for Ocean Conservation Science. 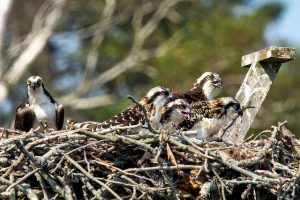 Ospreys are thriving along the shores and in the lands around Shinnecock Bay. Photo credit: Christopher Paparo/Fish Guy Photos

“Shinnecock Bay is arguably the healthiest bay in New York State, and our work demonstrates that people can reverse the damage done through nature-based, scientifically guided restoration,” Pikitch continued. “We hope and expect that designation of Shinnecock Bay as a Hope Spot will inspire others to take action to restore other places to their original beauty, biodiversity and health.”

Shinnecock Bay is a highly productive estuary that is approximately 122 kilometers from New York City. The bay is a hidden gem of biodiversity that covers an area of 40 square kilometers and consists of 9,000 acres of open water, salt marshes, intertidal flats and seagrass beds. These habitats serve as important nursery, feeding and breeding grounds for many species.

The creation of “hard clam sanctuaries” in western Shinnecock Bay is a pivotal part of the restoration effort of the SoMAS Stony Brook University team. As a result of this work, the dangerous brown and red tides that had been occurring annually have not been observed for several years. Landings of hard clams outside the sanctuaries have increased dramatically and are at a level not seen since the mid-1980s. And, numbers of fish in the bay, most notably forage fishes such as bay anchovy and menhaden, have escalated.