“The impact of the events of 2020 on filmmaking will be monumental,” said Karen Offitzer, director of the undergraduate minor in filmmaking at Stony Brook and one of three co-directors of the Social Impact Filmmaking program. “It will bring changes in the way we make movies, changes in the way we see them and changes in the very stories we want to tell.”
Offitzer said it’s too early to tell how the current crises America is experiencing will manifest itself in future films, but one thing is clear: we now have the ability, on a mass scale, to record what is happening around us at all times with common handheld devices. 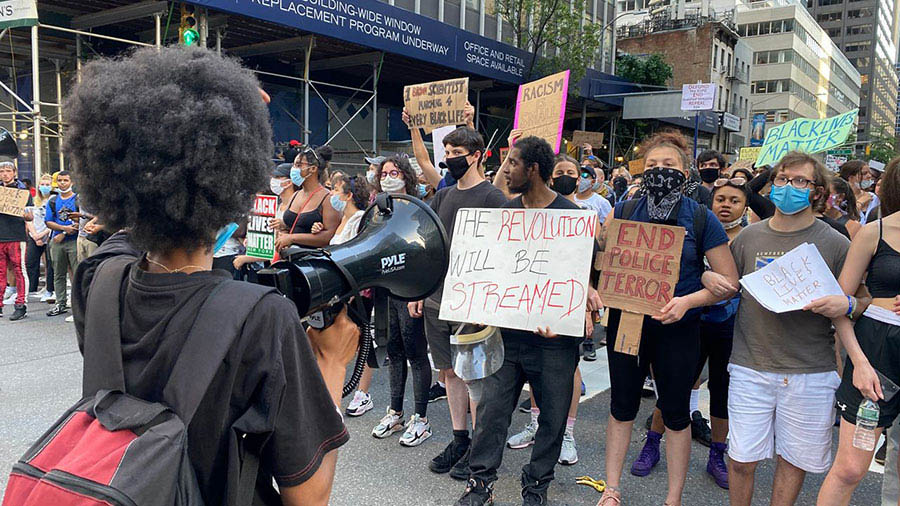 “Social media gives us all a powerful platform to get our content seen and interact with audiences,” added Simone Pero, another co-director of the program. “From a social impact perspective, what has fundamentally changed is that we believe filmmakers must evolve with what’s happening around us by leveraging the art form for positive change, because the issues are now impossible to ignore.”
Large shifts in culture and geopolitics have historically affected filmmaking. French Impression as it pertains to film, German Expressionism and Soviet Montage were all film movements that evolved in response to the defeats and triumphs of World War I. Italian Neorealism brought a sense of harsh but liberating reality to film after World War II. 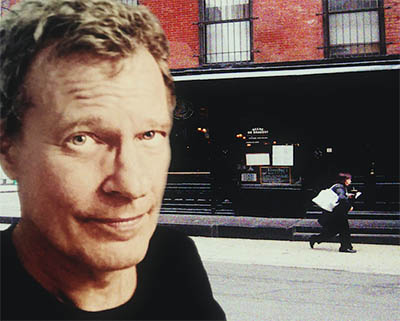 “Years after that, when life was ready to expand again, whimsical New Wave film movements evolved in France, England, Australia and Hong Kong,” said Jon Brandeis, the program’s third co-director. “We emerged from the Spanish Flu epidemic with a transition from comedic short form to the feature film as we now know it. Typically, difficult times make people turn to comedies; boom times to tragedies. The audience craves what it is not experiencing.”
While entertainment as a form of escapism has been the path taken by the industry and the marketplace in the past, today’s social unrest and the pandemic have hit many people close to home, dramatically changing many American lives.
“There’s an increased interest in content that moves beyond art for art’s sake and has a voice and point of view,” said Brandeis. “Now, thanks to the proliferation of the modern cell phone, more and more people have the ability to create content, develop their skills and practice the art form of filmmaking.”
Brandeis noted that most people with a cell phone simply point and shoot, which is still a powerful form of activism known as ‘citizen journalism.’
“The George Floyd video launched a global movement for change,” he said. “But as arguably the most powerful tool in an activist’s arsenal, when something historic isn’t happening right in front of you, filmmaking for impact requires a conscious effort. ‘Point-and-shoot’ isn’t storytelling, it isn’t persuasive, and it doesn’t have the authority of a point of view, or the power of a narrative structure.”
Despite the enormous capabilities individuals now have in their hands, Offitzer said filmmaking is still an art form with its own rules and language that must be learned and practiced to meet its potential as a change agent. And that is the mantra that serves as the backbone of Stony Brook’s Social Impact Filmmaking program. 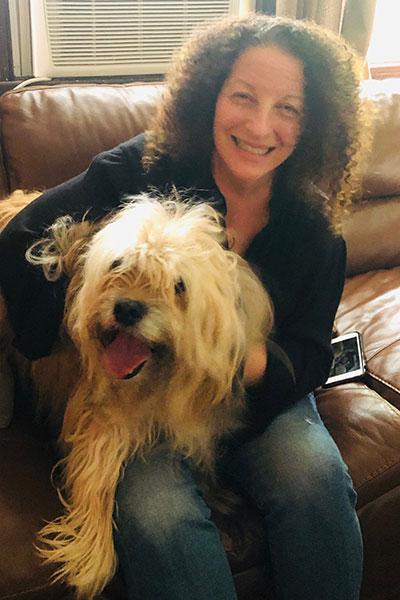 “Our program is designed to transform motivated people into effective change agents in a world desperately in need of them,” she said.
By examining activist strategies and methods, focusing on filmmaking as its most powerful tool, participants will learn how to capture and communicate authentic stories, emotions, causes and effects.
“In the very recent past, films have been used to point out serious issues that need to be addressed,” said Offitzer. “We continue on that course but we add a critical element to meet the moment — skills and tools aimed toward advocacy and solutions. Our mission is to help our students transform themselves into practicing filmmakers for social change.”
Brandeis, who is also a filmmaker, was introduced to activism during the Vietnam protests of the late 60s.
“Activism always seems so natural when the world insists on behaving horribly,” he said. “I’ve been an activist in one way or another my whole life, and when filmmaking started to become as accessible as it is, worlds of opportunity opened up and continue to. This is a remarkable time when an unprecedented desire for global change across the board has a chance for meaningful results. For that we need armies of activists.”
Pero, a faculty member in the Stony Brook-Killer Films MFA in Film program, said that for her, the personal became political at a very young age.
“I have system-bucking woven into my DNA,” said Pero, who began her career as a public policy analyst and speechwriter in the U.S. government before a series of career turns led her to filmmaking.
“My career prepared me to understand how narrative and the human story wield the power to inspire new ways of thinking and a willingness to act. Today I produce films that push boundaries, raise awareness, inspire change, and expose layers of the human experience on topics such as gender discrimination, disability rights, violence against women, healthcare, and Indigenous peoples. In this time of extraordinary shifts, our aim for this program is to show how film can move audiences from apathy to empathy to social action.”
The shift in activist filmmaking that is happening today is unlike anything in the past,” added Offitzer. “Films that inspire action, raise awareness and create impact around social issues are what we hold up as examples. Carbon Cowboys, for example, is a documentary series about solutions to environmental issues affecting farmers and ranchers, as well as a brilliantly subtle attempt to bridge divisiveness.”

She added that what makes this course unique is the moment we’re in — a moment in which you can point your camera at a global pandemic, large-scale protests around the world, the effects of a severely damaged economy, and escalating political and cultural divisions and discrimination that is taking place right in our own backyards.
“Occupy Wall Street, the Arab Spring, #MeToo Movement and Black Lives Matter, among others, are ideas that became transformative global movements primarily because of activist media,” said Offitzer. “Activist media itself, with some help from social media and technology, has become a new movement in the history of filmmaking.”
Offitzer said that while some students choose to plug into these massive events, others are attempting change inside of their own imperfect universes. 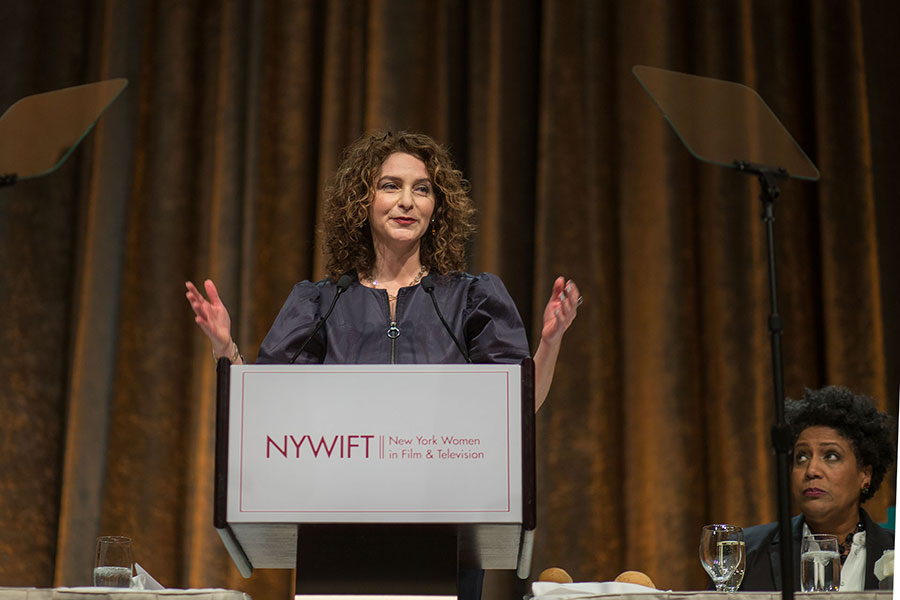 Simone Pero speaks at a gathering of New York Women in Film and Television.

“The students in our inaugural class are currently sharing stories and developing solutions on a wide range of issues including immigration reform, climate change, racism, LGBTQ rights, prison reform, women’s rights and hunger,” she said. “All these students will be trained as creative, effective filmmakers by understanding and practicing the fundamentals and learning the more advanced techniques of visual language and story designed to motivate and inspire.”
Years ago Offitzer helped design a program in Los Angeles that partnered with local community agencies to offer a free nine-month program comprised of interdisciplinary courses in art history, literature, philosophy and the writing arts to underserved, low-income adults, with the goal of helping them develop critical thinking skills while claiming their own voice. Later she would document the lives of participants in a New York-based version of the program in the short film I’m Not Who You Think I Am.
“This program offers similar opportunities for transformation,” she said. “It provides filmmaking tools and support to anyone with a cell phone, a story and a passion to make a difference.”
— Robert Emproto