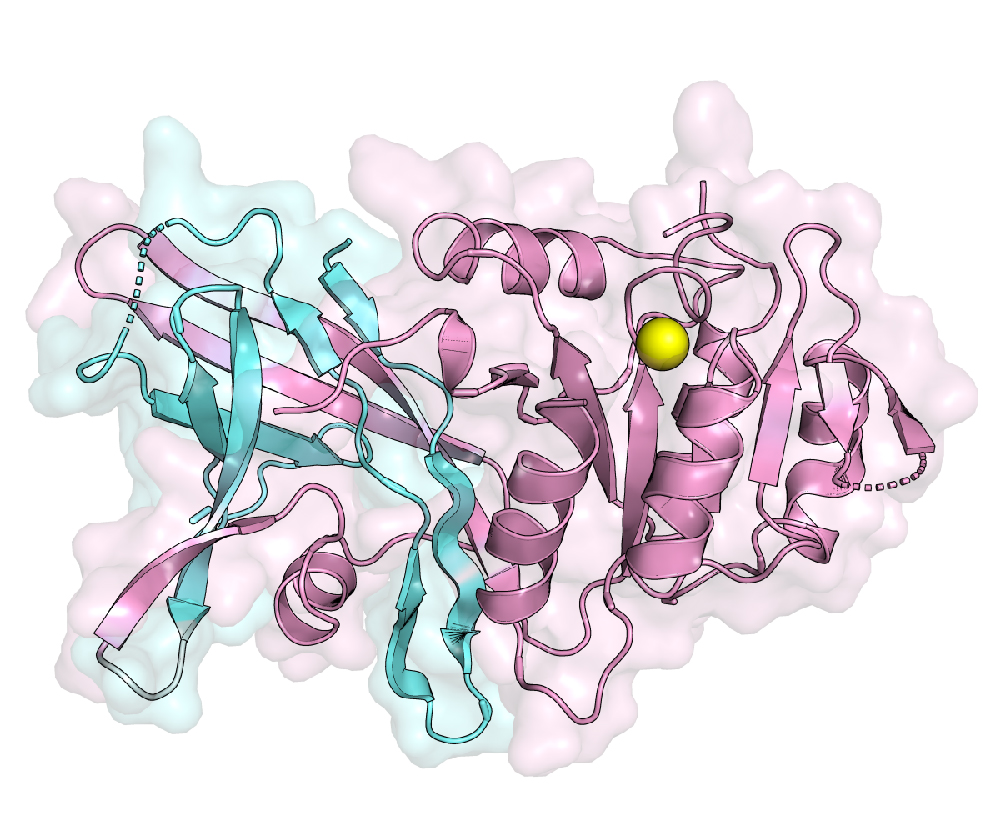 This structure of a lipin enzyme shows how two essential regions (colored blue and pink), located on opposite ends of the protein in humans, come together to form a function enzyme to help make triglycerides.

Lipins complete the second to last step of triglyceride production. But when mutations interrupt lipin functions, the body loses its ability to store fat properly, thus potentially triggering a wide variety of metabolic-related conditions. Scientists have unsuccessfully tried to create the first visual structure of a lipin enzyme since these enzymes were first identified in 2001. Now Airola and colleagues successfully explain in the paper their first crystal structure of a specific enzyme called lipin PAP.

“This structure answers a long-standing question for how two essential regions, N-lip and C-lip, which are located on opposite ends of this protein in humans, come together to form a function enzyme to help make triglycerides,” explains Airola, director of the Airola Lab. “Using this structure also helps us understand how the protein interacts with membranes, which is key to regulating its activity and the production of triglycerides.”

The team used X-ray crystallography, mass spectrometry and biochemistry to visualize the structure, which represents the active state of a lipin enzyme during the production of triglycerides, as well as its other functions, namely lipoprotein assembly and cellular signaling.

Valerie Khayyo, a Stony Brook graduate student in the Biochemistry and Structural Biology Program and first author of the study, added that the structure enables researchers to understand and see specific mutational changes in the amino acid building blocks of lipins that result in disease.

Khayyo noted that mutations in lipins are increasingly being identified in patients with muscle disorders as well, such as statin-induced myopathy and extreme cases in childhood rhabdomyolysis.

Overall, Airola says that the structure and study consolidates many previous observations into a unifying framework and sets the stage for scientists to resolve several remaining important questions concerning how lipins are regulated.

Collaborators on the study include Karen Reue at UCLA, who first identified lipins as proteins involved in triglyceride metabolism, and John Burke at the University of Victoria, Canada.