A team of scientists including Will Farr, an astrophysicist at Stony Brook University, has found a way for the first time to detect multiple tones of a black hole ringing like a bell — something that most astrophysicists thought would not be possible for a decade or more. This finding, published online in a paper in Physical Review Letters, confirms Einstein’s theory of general relativity and may help to revolutionize scientists’ understanding of black holes. 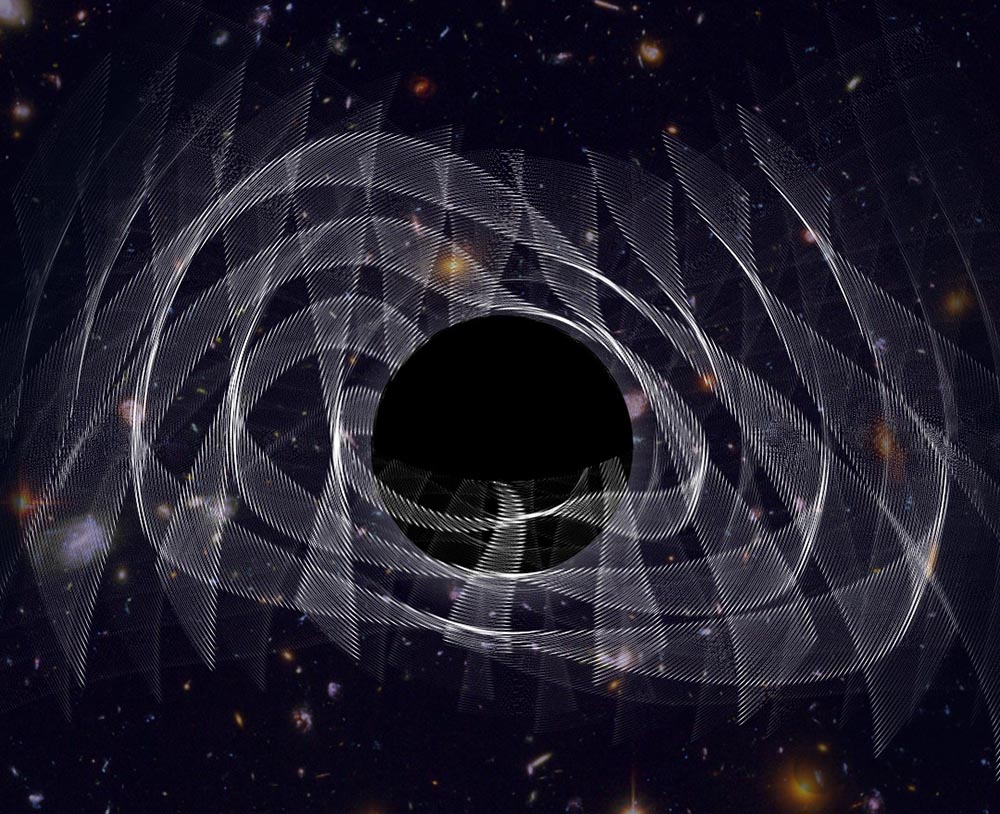 Black holes emerge in an agitated state from the violent astrophysical processes that birth them. Just like a struck bell, a disturbed black hole emits gravitational waves at characteristic tones that fade away as the hole settles. By measuring these tones, the team validates Einstein’s theory of General Relativity that predicts that the pitch and decay rate of these tones are uniquely set by the black hole’s mass and rotation speed (spin).
The scientists tested Einstein’s prediction by reanalyzing data from the first gravitational waves ever detected in a black hole merger event. The analysis led to the identification of two independent tones emitted by a newly born black hole. The pitch and decay rates of these tones are in line with Einstein’s theory.
“Previously it was believed these tones were too faint to be detected, yet now we are able to detect them and this opens the door for us to study the ‘ringing’ of black holes,” said Farr, Associate Professor in the Department of Physics and Astronomy in the College of Arts and Sciences and group leader for gravitational wave astronomy at the Flatiron Institute’s Center for Computational Astrophysics in New York City..
He explained that this was a direct test of properties of the black holes that form in these merger events and that the tones are emitted from the region very close to the “event horizon” of the newly formed black hole and therefore are sensitive to the properties of gravity in this extreme environment.
Currently there are two observatories internationally that detect cosmic gravitational waves, including those from black holes — LIGO and Virgo – and scientists had thought they were insufficiently sensitive to pick up or define multiple “tones” from merger events.
Farr says that the with new data analysis and LIGO and Virgo continuing to observe black hole mergers, tests from the observatories will become ever more precise, likely leading to additional detection of black hole tones and better understanding of these exotic objects.
LIGO was constructed by the California Institute of Technology and Massachusetts Institute of Technology with funding from the National Science Foundation. Farr’s work is also supported in part by the Simons Foundation.
Collaborators on the research include Max Isi (MIT), Matt Giesler (Caltech), Mark Scheel (Caltech), and Saul Teukolsky (Caltech).