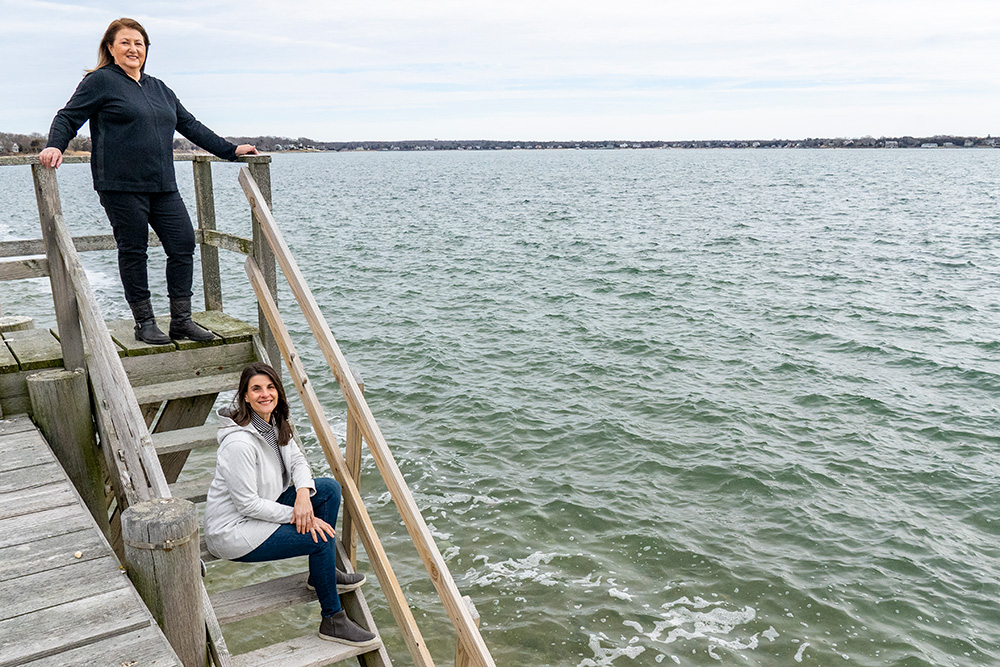 Shinnecock Bay bears the name of an indigenous people, but due to human activity it bears little resemblance to what it once was when it sustained Native American populations. In recent decades, poor water quality, harmful algae blooms and massive declines in shellfish have unfortunately become the new normal for Shinnecock Bay and estuaries around Long Island.
And yet, thanks to a decade-long effort by scientists at Stony Brook University’s School of Marine and Atmospheric Sciences (SoMAS), the bay is making great strides in returning to an ecosystem rich with marine life.
The Shinnecock Bay Restoration Program (ShiRP) is made up of dedicated Stony Brook faculty, staff and graduate students from the laboratories of Christopher Gobler, Ellen Pikitch and Brad Peterson. The labs work together toward the goal of improving water quality in western Shinnecock Bay by restoring the bay from within.
The approach centers around increasing filtration. Shellfish like clams and oysters are “filter feeders” that feed by straining suspended matter from the water. They help keep harmful algae in check and mitigate the impact of excess nitrogen seeping into the bay from underground septic systems throughout the watershed.
At the heart of ShiRP’s multi-faceted approach is the creation of hard clam “spawner sanctuaries,” which are harvest-free areas planted with high densities of adult clams. These sanctuaries not only supercharge filtration in localized areas of the bay, but more importantly increase reproductive success so the clams may efficiently and effectively repopulate the entire bay over time. The strategy thus provides both immediate and long-term payoffs.
“The South Shore Estuary of Long Island was once home to the nation’s largest hard clam fishery,” said Michael Doall, ShiRP’s leading restoration scientist and a key collaborator within the lab of Gobler, the endowed chair of Coastal Ecology and Conservation, based at the Stony Brook Southampton campus. “Unfortunately, due to unsustainable harvest and the reoccurrence of harmful brown tides since 1985, hard clam populations collapsed throughout the estuary, and by the end of the 20th century the harvest was down more than 99 percent from its peak.”
To date, ShiRP has planted more than 3.5 million adult hard clams into two harvest-free areas established by the Southampton Town Trustees, a key authority that supports ShiRP’s restoration efforts in the bay. 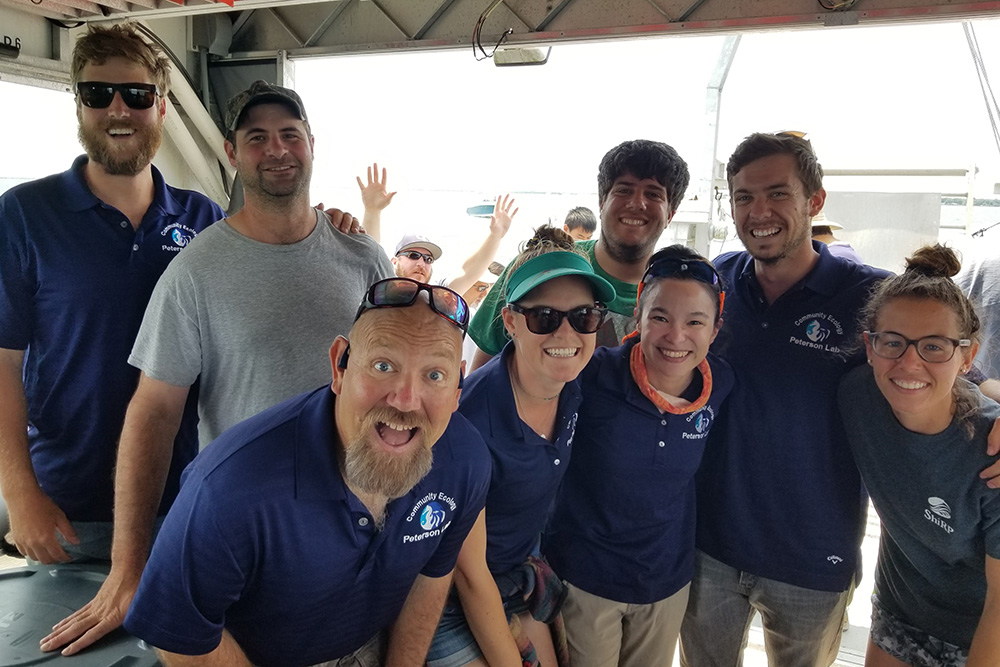 The spawner sanctuary approach has been so successful that littleneck clam landings outside of the closed areas are the highest they have been since 1985, according to Doall. “Since we began establishing spawner sanctuaries in 2012, the hard clam harvest in Shinnecock Bay has increased more than 1,000 percent,” Doall stated. “And the past four years has been the only four-year period without brown tides since they first appeared in 1985. The strategy appears to be working.”
Restoring the bay’s habitat and overall biodiversity is another key goal of ShiRP. “What I love about this project is that there are so many components — the hard clams, the oyster reefs, the eelgrass, the fish,” said Christine Santora, assistant director of Policy and Outreach at the Institute for Ocean Conservation Science at Stony Brook, who works closely with celebrated marine biologist Pikitch, endowed professor of Ocean Conservation Science. “It’s much more than a singular approach; our scientists have designed the restoration to take into account how different parts of the bay interact.”
Another vital component of ShiRP is collaboration. Reinvigorating the bay’s fragile ecosystem, said School of Marine and Atmospheric Sciences Dean Paul Shepson, has involved a hands-on collaboration of scientists, community members, and, of course, philanthropic partners.  “The success of ShiRP would not have been possible without the Laurie Landeau Foundation, LLC,” Shepson said. “Their partnership helped launch and sustain SHiRP and we owe them our gratitude for believing in us and helping us achieve the success we have.”
ShiRP has built, with New York State Department of Environmental Conservation approval, six oyster reefs in the western bay since 2017. The reefs can be thought of as living organisms, made up of millions of fast-growing oysters and newly settled marine life that use the reef as their habitat. “It’s amazing to see oysters the size of poppy seeds grow into a living reef, and to see them collectively form a mini-ecosytem that is filtering the water and providing a home for marine life,” Doall says. He is measuring growth, mortality and disease to make sure new reefs are sited and built for maximum effectiveness.
Peterson, based at Stony Brook Southampton, leads the eelgrass habitat restoration component of ShiRP. Eelgrass is a key habitat in the bay, but is in decline worldwide. He and his team of graduate students have distributed almost seven million eelgrass seeds into the western bay since 2013.
Peterson noted that as the clams and oysters create better water quality conditions through filtration, more light will reach the bottom of the bay, helping the eelgrass beds to naturally expand. ShiRP’s success in restoring 100 new acres of eelgrass is the result of both direct seeding restoration and natural expansion due to improved water clarity.
The ShiRP approach, importantly, relies upon monitoring data to not only evaluate the success of the restoration but to track broader improvements in water quality, habitat and fish. 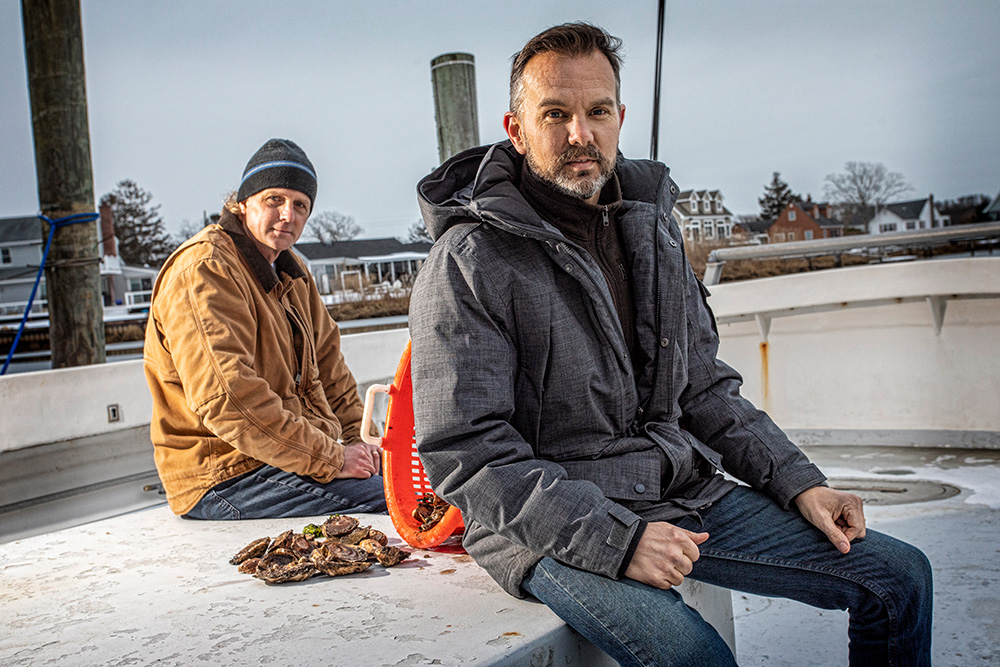 The Gobler and Peterson labs monitor the bay bottom to document hard clam survival and reproductive condition, and whether there are newly generated clams resulting from the sanctuaries. Gobler, perhaps Long Island’s foremost expert on water quality, consistently measures conditions in the bay including the presence and extent of harmful algal blooms, and how the bay’s physical conditions are improving.
Pikitch’s lab focuses on the upper end of the food chain. She and postdoc Sara Cernadas-Martin have been leading fish surveys since restoration began to collect a baseline of fish composition and diversity in the bay. The dataset is now being used to determine whether the restoration is positively impacting fish populations.
Santora explained that three types of fish surveys are utilized: trawling, underwater video, and most recently, eDNA water samples, where water pumped through a mesh filter provides DNA clues to reveal the various species present in the bay.
The fisheries’ surveys show that the bay is filled with both ‘usual suspects’ — species present in the bay every year — as well as species that are more infrequent. Santora noted that the surveys consistently show that forage fish are highly abundant in the bay, which makes sense since estuaries are known nursery grounds for fish large and small. “We see everything from puffers and seahorses to black seabass and fluke, and a whole lot of bay anchovies, silversides and menhaden too,” she said.
In the past, marine life in the western part of the bay had been degraded compared to what was measured in the east.
The Ponquogue Bridge, the distinctive bridge over Shinnecock Bay connecting the mainland to the barrier island, serves as a defacto dividing line between healthy and less healthy marine life in the bay. In the past few years, however, ShiRP has seen a very positive trend toward improved marine life in the western bay.
“It’s so exciting to see that water quality improvements in western Shinnecock are leading to more habitat and better fish abundance and diversity. That was the original vision,” Santora said. “The hard clam population is up, the water clarity is up, the brown and red tides are down, and the eelgrass is up. We just don’t put clams in the water and say it’s over,” said Santora.
— Glenn Jochum