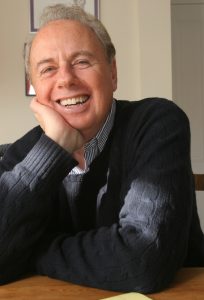 Novelist Roger Rosenblatt, a Stony Brook University Distinguished Professor of English and Writing, has launched a new weekly literary series, Write America, which features renowned and emerging writers in weekly readings and conversation about how books and art might bridge the deep divisions in our nation.
The series, in collaboration with Book Revue in Huntington, N.Y., begins on February 1 at 7 pm EST with former United States Poet Laureates ​Rita Dove ​and ​Billy Collins. The series is available on Book Revue’s Crowdcast channel.
“When President Trump incited the mob attack on our Capitol, it proved how lethal language can be,” Rosenblatt said. “Writers have better uses for language – the stirring of thought, self-inspection, fellow-feeling, love. The divisions in the country do not end with Trump, who served to show us how deep these divisions go. We are an injured nation. Write America will try to show how language heals.”
Additional speakers confirmed to appear include: ​Alan Alda, Garry Trudeau, Alice McDermott, Paul Muldoon, Natalie Diaz, Paul Auster, Carlos Fonseca, Grace Schulman, Major Jackson, Vijay Seshadri, Russell Banks, Juan Felipe Herrera, Tyehimba Jess, and many more.
The series will also feature several writers who are part of the Stony Brook faculty, including Collins, Paul Harding, Amy Hempel, Molly Gaudry, Patricia Marx, Julie Sheehan, and Patricia McCormick.
“Write America is an organization of writers concerned about the divisions in our country that have evidenced themselves and deepened over the past few years,” said Rosenblatt. “We see a torn America these days, jeopardizing basic principles of justice, freedom, fair play, and equality.”
“The nation is injured. We hope to contribute to its healing.”

Roger Rosenblatt’s work has been published in 14 languages. He is the author of five New York Times Notable Books of the Year, and three  Times bestsellers, including the memoirs Kayak Morning, The Boy Detective, and Making Toast. He has also written seven off-Broadway plays, notably the one-person Free Speech in America, that he performed at the American Place Theater, named one of the  Times’ “Ten Best Plays of 1991.” He also wrote the screenplay for his bestselling novel, Lapham Rising. In 2015, he won the Kenyon Review Award for Lifetime Literary Achievement.

All events in the series are free, but registration is required.