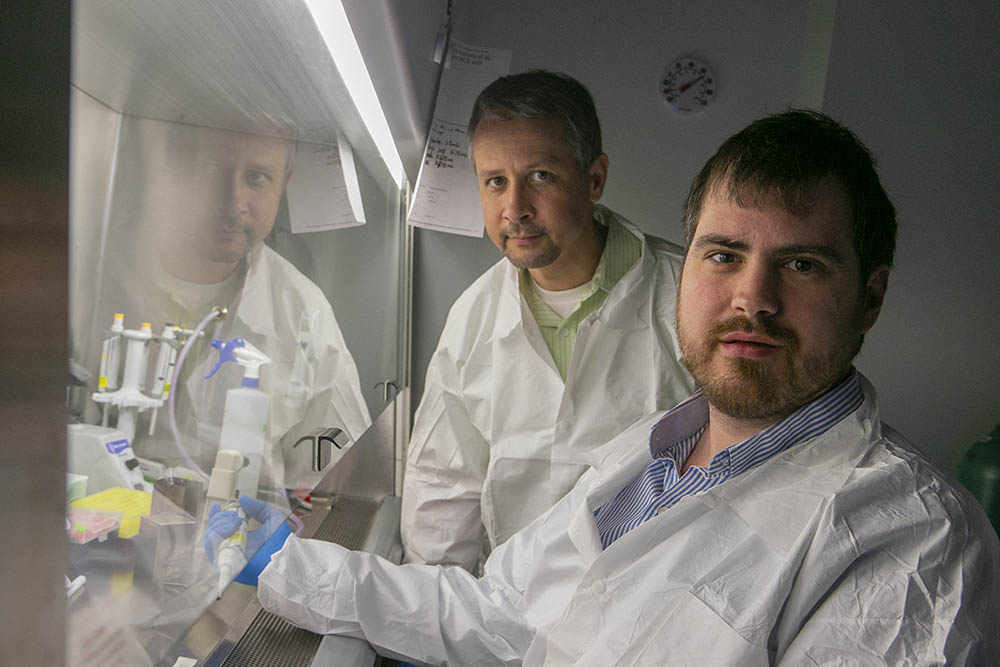 Gábor Balázsi, left, and paper co-author Kevin Farquhar in the lab where they engineer mammalian cell lines and test how drug resistance evolves.

A  study published online in Nature Communications offers a test of prevailing theories of drug resistance, which often causes chemotherapy treatments to fail. Scientists in recent years have hypothesized that cell-cell differences, also known as cell heterogeneity, aides the emergence of drug resistance. Previous studies suggest that these effects depend on drug levels. To date this theory has not been experimentally tested.

Balázsi’s research team engineered mammalian cell lines to test how chemotherapy drug resistance evolves in the context of cell-cell differences. The researchers developed a model system of two otherwise identical cell lines, except that synthetic gene circuits caused one of the cell lines to have higher heterogeneity. This enabled Balázsi and colleagues to mimic the evolution of drug resistance in the laboratory.

The researchers also discovered cells that are dormant, which neither grow nor die (called ‘persister’ cells) appear necessary for the evolution of drug resistance at high drug levels.

Their findings suggest that by combining current chemotherapy treatments with future methods that alter tumor heterogeneity, or by targeting persister cells, clinicians may be able to improve therapeutic efficiency by minimizing drug resistance.

“As we further advance this research, we may be able to evolve patients’ tumor cells in the laboratory as a powerful way to screen and optimize treatments,” Balázsi said.