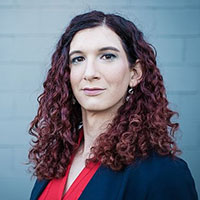 Like many people in Colorado, Brianna moved here from another state. But nearly 10 years later, she has never regretted her decision to relocate to such a great state and beautiful city, Arvada. Her career as a geologist drove her to Colorado, but has found so many opportunities here. Since being in Colorado, she worked as a mining consultant, a substitute teacher at a Catholic Jesuit school, and as a Web Application Developer.
Brianna grew up in a small town in the Hudson Valley of New York. She had hard working parents that both worked to provide for her and her brother. They were taught the value of money, how to save, and how to treat other people. She grew up very close to her grandparents and learned the value of wise elders and their experiences. She started working at age 14 to pay for the things she wanted and always had a job (or three) from Middle School through College. She was very fortunate and thankful for her parents to pay for her way through college at the local state university. This was something that she did not take for granted.
She attended the State University of New York at New Paltz where she earned her BA in Physics and BS in Geology. In High School, she learned the value of service when she became a very active member of the Milton Engine Company No. 1 as a Volunteer Firefighter. She took every training course around the county trying to learn every aspect of firefighting and was voted Junior Firefighter of the year for outstanding effort. After 7 years of volunteer service, she resigned from the department when she went to Stony Brook University to earn her MS in Geochemistry. After attending Western Michigan University Hydrogeology summer program, she quickly got a job doing Environmental Consulting. After learning the intricacies of the environmental industry, she decided that it was time to move on and relocated to Colorado.
Brianna enjoys nature and the mountains through trail running and photography. She spends time with her friends running the trails of the Front Range and sharing the vistas through photos and stories. She has watched her friends start families and is excited to take a more active role in enriching their children’s lives by taking them on outings to parks and museums. She is committed to ensuring that they receive a well-rounded experience and education.
During slow times of work, she volunteered at the Denver Botanic Gardens. More recently, she became a member of NecroSearch International, a 501c3 organization charged with using their collective scientific knowledge and experience to aid law enforcement solve cases and bring families closure and peace. She has also been involved in her local Home Owner Association since 2011. She was elected President of the HOA in 2014 and continues to lead the board today.
Brianna is a political outsider but started taking a more serious interest in national politics in 2012. Her interest in local politics started in 2016 where she began talking to her state leaders on issues that were important to her. She was elected as a Delegate at the County Assembly in the 2016 for Candidate Bernie Sanders. She joined the Jefferson County LGBTQ+ Caucus in February 2017 and was elected as Secretary/Treasurer in August. She was more recently appointed as Captain at Large for the Jefferson County Democratic Party in October 2017. She believes that many people in Colorado don’t pay enough attention to what is going on in their neighborhoods. Part of that reason is that they don’t know who represents them or that their voice even matters. There’s a general dissatisfaction with government. She believes that more people are needed in government that don’t just follow their agenda, but listen to their constituents and hear their concerns. She will be that person for District 27.
Brianna has always felt compelled to serve her community. She knows that serving as the State Representative for HD 27 is the best way to do this. As a society, we have been drifting apart and settling in our ‘political boxes’. We tend to dismiss people too quickly, because of political affiliation, age, economic circumstance, religion, skin color, gender identity, sexual preference, etc. Brianna believes that there are many things that we can find in common with each other, and around that intersectionality we will come together and build a better sense of community. Instead of isolating ourselves, we will become better neighbors and friends. We’re all in this together!