Peter Davis has been captivated by the sciences for as long as he can remember.
“Where my childhood friends would watch action-packed cartoons, all I ever wanted to watch was the Science Channel,” Davis said. “Even today, nothing lifts me from the ordinary quite like watching an episode of The Universe.” 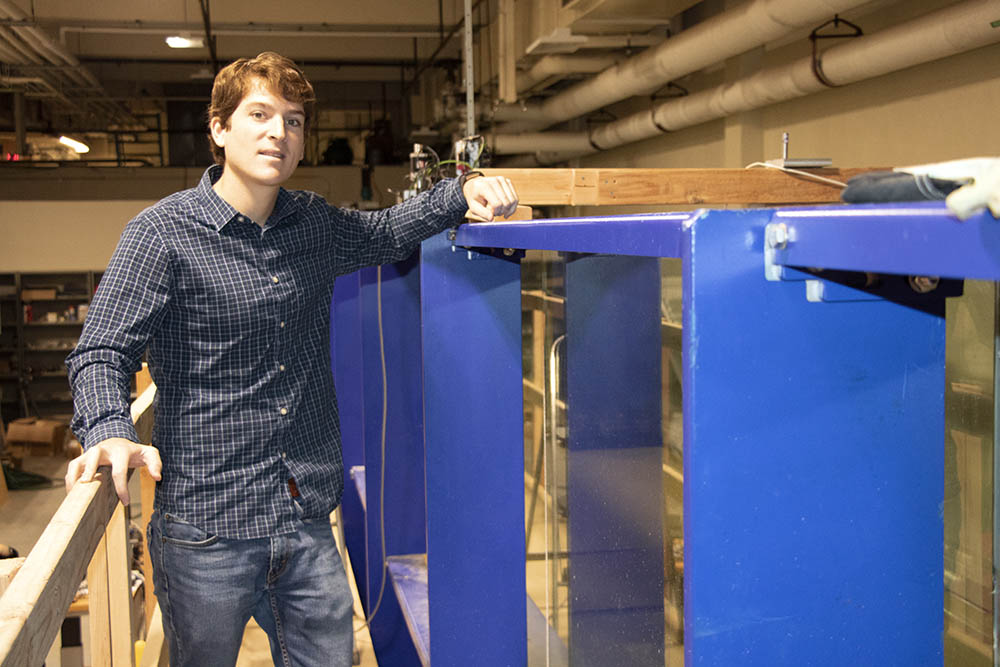 However, for the fourth-year Civil Engineering student, discovering his passion for research in civil engineering has been a process. He entered SBU as a Biomedical Engineering major, and selected Civil Engineering at the end of his first year for its balance of the pure physical science with the practical application of engineering.
“While the abstractions of physics fill me with wonder, it is important to me that my hard work produces something tangible. The practicality of civil engineering brings me down to earth.”
In his first semester in Civil Engineering, he secured an internship with the New York City School Construction Authority’s (NYCSA) rotational program working in several departments, including Architecture and Engineering, Construction Management, and Environmental and Regulatory Compliance. Nearly all of his time was spent on job sites where he gained a holistic understanding of the construction process. He said: “This was a year-round internship, and through balancing work and school I became excellent at time management. I commuted to NYC three times a week, and I still earned straight A’s both semesters.”
Industry experience has given him a unique insight into practical applications of technologies that are often first developed in an advanced engineering laboratory: seismic bracing, high strength concrete, etc. During his time with the NYCSCA, he learned that his favorite aspect of civil engineering was academic theory and research. Following his internship, he decided to focus on engineering research by working as an undergraduate researcher with Professor Ali Farhadzadeh.
“In the beginning, I helped Dr. Farhadzadeh’s graduate students with basic lab tasks and I produced detailed literature reviews each week. I would show up to Dr. Farhadazeh’s office eager to discuss the literature I had reviewed and some potential topics for my own research.”
After several months of weekly meetings, and seeing the potential of what Davis could achieve, Professor Farhadzehdeh suggested he embarked on his own research project in his lab.
Davis began investigating the potential use of a relatively new soil strengthening technique, namely Microbially Induced Calcite Precipitation (MICP). MICP can be defined as the promotion of calcium carbonate (CaCO3) precipitation by the activity or presence of microbes: Calcite is simply a stable chemical polymorph of calcium carbonate. To prepare, he reviewed every piece of available research concerning MICP and, like an engineer, carefully planned the details of his study, including: calculations for reagent quantities, all aspects of the procedure, a detailed timeline, a full cost estimate, and more. Experimentation is currently underway. 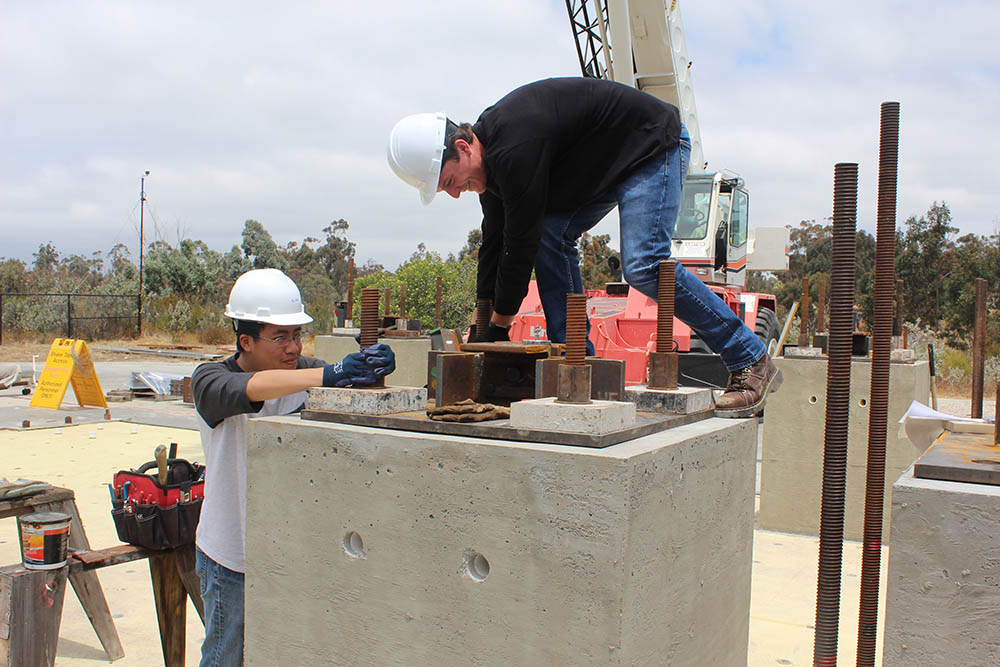 Working at UC San Diego’s LHPOST, Davis participated in a study that produced experimental data on the behavior of steel collector beams under seismic loads.

“I feel incredibly grateful to have Dr. Farhadzadeh as my mentor,” said Davis.  “He has given me space to demonstrate my own motivation and skills, while providing me with resources and advice to produce quality research. Most of all, he has been wonderfully supportive of my goal to become a researcher and making an impact in the field of civil engineering. I highly recommend that any civil engineering student interested in research form a relationship with one of our faculty members.”
“Peter has all the qualities of a great researcher. He is a meticulous, forward-thinking, high-performing student, and passionate about all aspects of science and engineering,” said Ali Farhadzadeh, Assistant Professor in the Department of Civil Engineering. “I have no doubt that with his determination and hard work, Peter will make important contributions to relevant and meaningful research projects.”
Last summer, Davis received a full stipend to conduct research at UC San Diego’s Large High-Performance Outdoor Shake Table (LHPOST), funded by the Natural Hazards Engineering Research Infrastructure (NHERI) Program. Davis produced a published research paper and presented his work at UT Austin’s Texas Advanced Computing Center.
Having found his passion in research, Davis has decided to pursue a PhD immediately following graduation with the goal of developing a career in research. Currently specializing in structural engineering, he also enjoys coursework in mechanical engineering and geotechnical engineering. He is strongly considering earthquake engineering as his specific focus in graduate school as a combination of these fields.
When not studying or conducting research, he enjoys spending time in the ocean. As a Long Island native from the South Fork town of Amagansett, he says Long Island provides some of the best fishing, clamming, and boating on the east coast.  He even harvests mussels, clams, scallops, oysters, lobsters, and all types of fish. One of his favorite hobbies is spear fishing. “It sounds impressive, but it’s really not difficult if you don’t dive too deep. There is nothing like it; when I’m 40 feet under on a single breath of air there is no room to worry about an upcoming exam!”
— Content developed by Peter Davis, with editing support from Jefferson Valerio