As the daughter of Chinese immigrants, Peony Tse ’20 feels a duty to give back. She has already done so in countless ways — by securing multiple scholarships, through internships in foreign countries, and by working with the world’s largest collegiate service organization.
“As a first-generation college student, earning scholarships has always been my way of thanking my parents for supporting me,” Tse said. “Nothing feels better than to be able to take ownership of my own education and future in this way.” 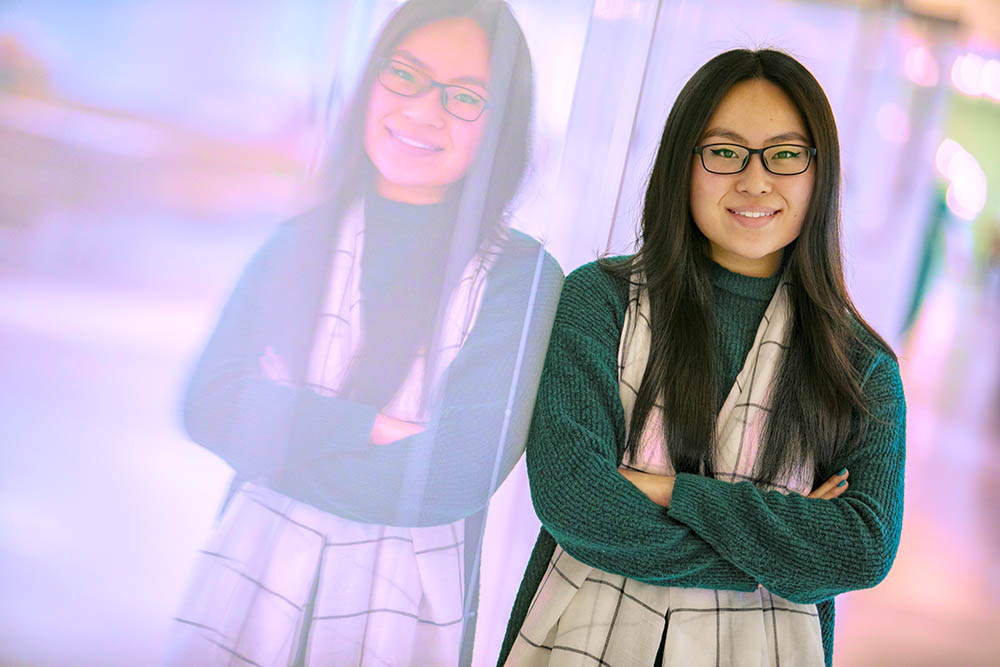 Tse received the Alumni Association Past Presidents Scholarship from Stony Brook University from 2019 to 2020 and the Linda and Richard Gelfond Scholarship, also from Stony Brook, between 2017 and 2019. These scholarships are awarded to high-achieving students who exhibit clear leadership ability as defined by student accomplishments.
Her studies at Stony Brook’s School of Social Welfare led to more opportunities. In 2019, she landed the prestigious Benjamin A. Gilman International Scholarship granted by the U.S. Department of State, which provides the winner with skills deemed critical to the country’s national security and economic prosperity.
The Gilman Scholarship supported Tse last summer as she student-interned in Seoul, South Korea, working at Yeomyung School, the largest South Korean government-sponsored alternative secondary school for North Korean refugees and their children. Meanwhile she worked with Teach North Korean Refugees (TNKR), a nonprofit dedicated to making a difference in the refugee community through one-on-one individualized English tutoring, speech coaching and mentoring.
“It was incredible connecting with my students,” Tse said. “As a social work student myself, it felt surreal to hear that one of my students aspired to be a social worker because of the way that social workers helped her when she left North Korea.”
She is also a recipient of the SUNY Diversity Abroad Honors Scholarship and, from 2017 to 2019, she was a scholar in the Jewish Foundation for Education of Women (JFEW) SUNY Global Affairs Program, which empowers women to be globally focused leaders.
Perhaps her most challenging assignment came from an internship at Asia Initiatives (AI) in the summer of 2018, an opportunity resulting from the JFEW program.
“On the second day, I was tasked with the enormous responsibility of writing a grant proposal valued at more than $20,000,” she said. “Feeling out of my league, I overcame the feeling of initial intimidation by springing right into action and tackling the needed research.
“Using the art of storytelling, I advocated for girls in Lucknow, India, which resulted in AI expanding an education program in Lucknow and building 10 gender resource centers to help 500 young girls empower themselves,” she said. “This was the first time I saw the meaningful outcome of my work on such a large scale and it solidified that this work is my path for the future.”
Her most longstanding affiliation with any organization on campus has been her work with Circle K International, the world’s largest collegiate service organization. Tse used her experience, as executive assistant from October 2016 to March 2017 and vice president from April 2017 to March 2018, as a springboard to serving as the New York District governor, a role she has fulfilled since April 2019.
In that capacity she guides the District by working with a supporting board of 25 officers who oversee 33 clubs and more than 750 members across the state.
Passionate about ending the global water crisis and disease, destigmatizing mental health and supporting hospitals, shelters and community centers state-wide, Tse and her fellow service members have raised more than $28,000 and performed more than 12,000 service hours.
For Tse, it all comes back to the School of Social Welfare.
“What I love about SSW, and what drew me to apply, is its priority of empowerment for all people. I value that this education focuses on promoting human dignity, inclusiveness, diversity and equality as well as economic, environmental and social justice.”
— Glenn Jochum