Rowan Ricardo Phillips, a professor in the English Department of the College of Arts and Sciences, was recently awarded the PEN/ESPN Award for Literary Sports Writing for his book, The Circuit: A Tennis Odyssey. This annual award honors nonfiction books on the subject of sports that were published in 2018. Dr. Phillips is one of five recipients for 2019 who were celebrated at the recent PEN America Literary Awards in New York City. 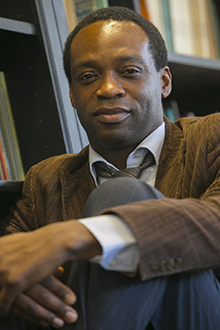 From the judges’ citation: “The Circuit is a dizzy, unbridled, obsessive book about a love for tennis told by recounting the minutiae of the 2017 men’s season. Phillips transforms details into poetry as he follows the season-long trajectory of a gaggle of players culminating in a showdown between Roger Federer and Rafael Nadal. A book lovingly built for fans and non-fans alike, Phillips is uncommonly generous with the reader, taking time to render the game’s fine points with a ceremonious attention that can only be described as devotion. Such observance turns sport narrative into near religious text, and set against the dark backdrop of a Trump election and the author’s own recovery from a heinous Achilles injury, the book becomes a meditation on all things gorgeous and grave about the fragile human spirit and all it seeks to—and fails—to accomplish.”
Dr. Phillips is the author of five books and a work of translation. His books of poetry are The Ground (2012), Heaven (2015), and the forthcoming Living Weapon (2020). He is also the author of a work of literary criticism, When Blackness Rhymes with Blackness (2010), a translation from the Catalan of Salvador Espriu’s Ariadne in the Grotesque Labyrinth (2012).
Dr. Phillips is the recipient of the PEN/Osterweil Award for Poetry, the Anisfield-Wolf Book Award for Poetry, the GLCA New Writer Award for Poetry, the Nicolás Guillén Outstanding Book Award, a Whiting Award, and a Guggenheim Fellowship. His work has also been selected as a book of the year by NPR, one of the best poetry collections of the year by The Washington Post, a long-listed finalist for the National Book Award, and a finalist for the Griffin International Poetry Prize, NAACP Image Award, the PEN Open Book Award, and the Los Angeles Times Book Award. His poetry has been translated into Catalan, German, Italian, Norwegian, and Spanish.
Founded in 1922, PEN America is the largest branch of the PEN International network. With the slogan, “The Freedom to Write,” PEN America works to ensure that people everywhere have the freedom to create literature, to convey information and ideas, to express their views, and to access the views, ideas, and literatures of others.