After pursuing a Dietetics Technician degree at Suffolk Community College, Alexa Detore ’23 thought her career in nutrition was on its way. But soon after getting her first job, she began to have second thoughts. 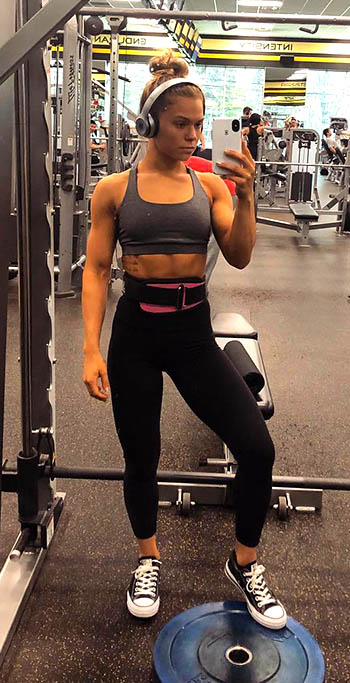 Alexa Detore ’23 in the gym

“I’ve always been passionate about fitness and nutrition, but I just didn’t like the job,” she says. “I worked in the dietary department of a nursing home and I felt my position there wasn’t having much of an impact on the patients. It wasn’t as hands-on as I hoped for.”
As she contemplated her future, she left her job and hit the gym. Her fellow gym members – several of whom were competitive bodybuilders – began to notice her focus, determination and results.
“My friend said, ‘You’re here every day, why don’t you compete? You’d be great,’” she said. “I was ecstatic that they even noticed.”
Intrigued, she did some research, and soon after began working with a coach.
“At that point, I was all in,” she says. “I did as I was told and put everything else on hold and got to work.”
Alexa says that preparing for a bodybuilding competition requires a much higher level of discipline than someone working out to keep fit, including strict consistency with your workouts and diet.
“I made sure I did a certain amount of cardio each week and ate a certain amount of calories,” she says. “I was on a very specific high-protein meal plan that I stuck to seven days a week for months, and drinking a minimum of one gallon of water a day. The goal is to lose as much body fat as possibly while maintaining your muscle mass.”
She estimates that she was able to get down to about seven-percent body fat. To give some perspective on that number, the American College of Sports Medicine considers “satisfactory” body fat percentage ranges for healthy adults to be 20 to 32 percent for women, and 18 to 24 percent for men. While training, Alexa’s meals mirror what an Olympic athlete might eat: lots of chicken, rice, steamed vegetables, oatmeal and egg whites, with some salmon and steak mixed in.
She competed in her first show in April 2018, winning four trophies in several categories, including the “Novice” division, which is for first-time competitors, and the “Junior” division, which is for competitors age 23 and younger. Competitors who win a “Novice” division are required to move up to the more competitive Open division, which Alexa did in her second show, winning again. Her third show – and third win – was at “National” show, a win that gave her “Pro” status.
“Once you attain ‘Pro’ status you begin to collect points to compete in the Olympia,” she said. “It’s the Super Bowl of the sport.”
Her fourth show was her “Pro” debut, where she placed fourth and earned six points to qualify for the Olympia that year. Unfortunately, since that show was the last show to collect points for the 2018 Olympia, Alexa didn’t have enough total points to qualify. 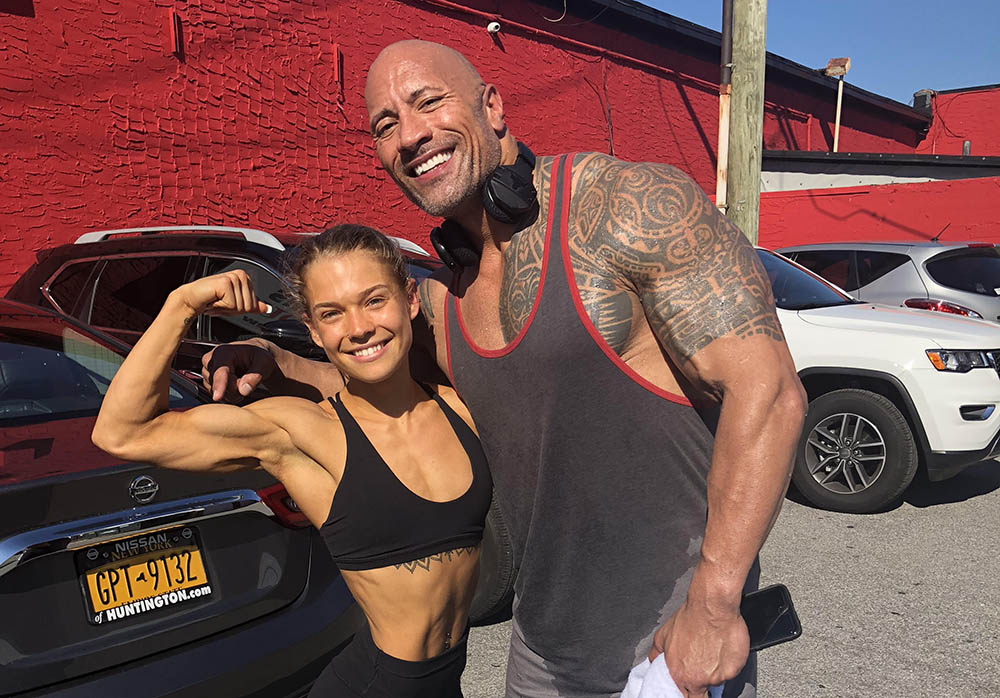 While she was training, Alexa worked as a personal trainer in New York City, enjoying a brush with fame when she trained Nancy Shevell – who happens to be Mrs. Paul McCartney.
“It was crazy to be in the same room with him,” she says of the Beatles’ legend.  “He’s in great shape. He can actually hold a headstand for 10 minutes.”
She also met actor and wrestling legend Dwayne “The Rock” Johnson, who was working out at her gym during a break in his schedule while visiting New York.
“He said I looked great,” says Alexa. “That was the same week I achieved ‘pro’ status. That was a good week!”
During her time working as a personal trainer, she realized that she enjoyed helping people and working with them and thought that a career in medicine – and specifically nursing – might be a good fit for her.
“Part of the reason that I decided to come back to school to be a nurse was because I wanted more hands-on interaction helping patients,” she says. She enrolled at Stony Brook, close to her Manorville, Long Island home, and began her pursuit of a nursing degree this past September.
“Fitness will always be there,” she said.  “But for my ‘adult’ job, I think I’d like something in nursing or in the emergency field.”
Alexa is also an EMT and hopes to join Stony Brook’s EMT club in the spring semester. As for the future, running a marathon is also on her “to-do” list.
“Everything we do is a choice,” she says. “To succeed you have to really want it. You can apply that to anything in life. I always try to encourage people. If you have a goal, go for it.”
— Robert Emproto