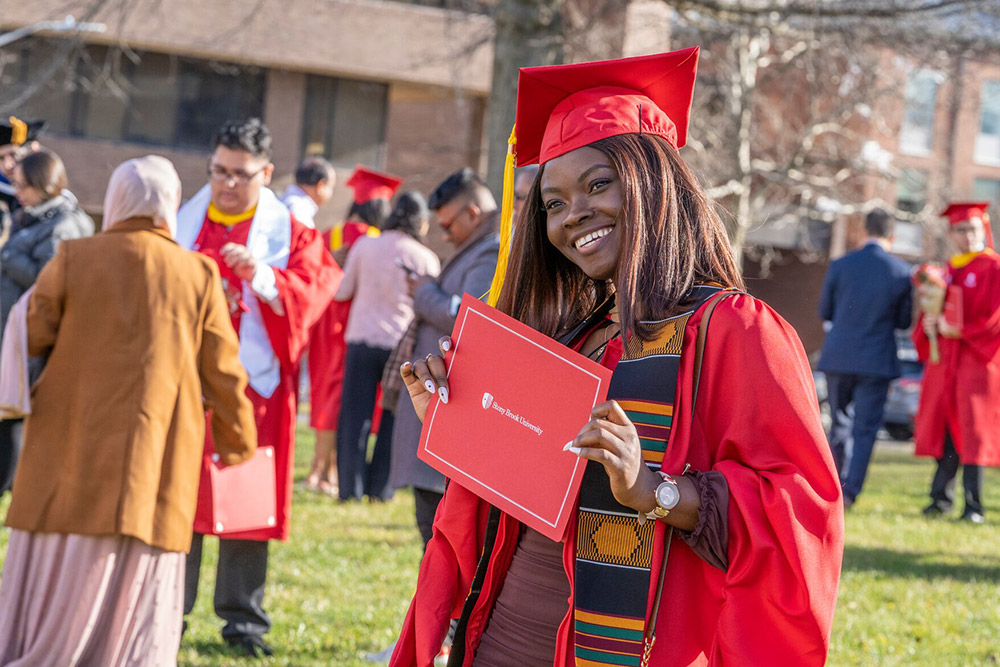 Stony Brook University President Maurie McInnis congratulated nearly 1,700 graduates at the university’s 24th annual December commencement ceremony, which was held December 17 at Island Federal Arena.
“Graduates, you have learned and grown more in your time in university than anyone could have predicted,” McInnis said in her commencement address. “The pandemic time has been difficult. It has been unexpected. And it has been challenging. And yet you have taken each challenge with the kind of bravery and creativity I have come to expect from this class.”
The December graduates joined more than 200,000 Stony Brook alumni around the world.

A brass ensemble performance featuring student musicians Brian Olson, Daniel Jones, Noah Fotis, Michael Stanton and Taylor Peterson welcomed guests as they entered the arena. Richard Larson, president of the University Senate, led the procession and began the ceremony, introducing Michaela Larsen, who sang the National Anthem. Larson then introduced several special guests, including New York State Senator Mario Mattera and New York State Assemblyman Steven Englebright, members of the University Council and student government leaders.
McInnis followed with her commencement speech, highlighting the achievements and scholarship of the Class of 2021.
“I have noticed one thing in particular about this unique group of graduates,” she said. “You think about the future very seriously. As with all of our Seawolves, you think about your role in the world, your hopes and dreams in relation to all those around you — and importantly, you think about what kind of lives you want to live.”
U.S. Senator Charles Schumer delivered his congratulations via a video message, telling the graduates that while the challenges of the moment are unique, “nothing can take away from the fact that you’ve earned a degree from such a fine institution of higher learning.”
Vice Provost for Faculty Affairs and Diversity, Equity and Inclusion Monica Bugallo and Dean of the Graduate School and Vice Provost for Graduate and Professional Education Eric Wertheimer presided over the hooding of the doctoral and PhD candidates, respectively.
Executive Vice President for Health Sciences Harold Paz hooded the one December candidate from the Renaissance School of Medicine, inviting new physician Patrick Yang to recite the Hippocratic Oath. Wertheimer then presented the master’s degree candidates.

Vice President of Student Affairs Rick Gatteau introduced the student speaker, sociology major Julia Doret, who said she knew when she arrived on campus that she would always have support at Stony Brook. She encouraged her fellow graduates not to worry about the future.
“You didn’t know what your life was going to look like four or five years ago, but here you are graduating from Stony Brook University today,” she said. “It’s okay if you don’t know now — you’ll get there — and when you do, you’ll realize what I did my first time on campus. You were never, and will never, be lost. You will always succeed.”
Bugallo returned to present the honors candidates and then all candidates were presented to McInnis, who conferred their degrees. Ahmed Belazi, president of the Alumni Association, welcomed the new graduates, and the ceremony concluded with a video message from the association and the performance of the Stony Brook alma mater, “Sandy Shore.”
The ceremony also featured a very special moment when Alyssa O’Hara, who graduated with a degree in mathematics, was surprised on stage by her husband, Justin O’Hara, a senior airman in the U.S. Air Force.
At the conclusion of her remarks, McInnis praised the graduates, admiring them for how they allowed themselves to be shaped by their various experiences and perspectives. “You have come to define a new era of scholarship and innovation, one that proceeds with care, with community, and with respect,” McInnis said. “I cannot think of a better and more needed addition to the world.”