New research on nanowires that could facilitate the harvesting of solar energy has been published by a team of scientists from Stony Brook University, Brookhaven National Laboratory and the Naval Research Laboratory. 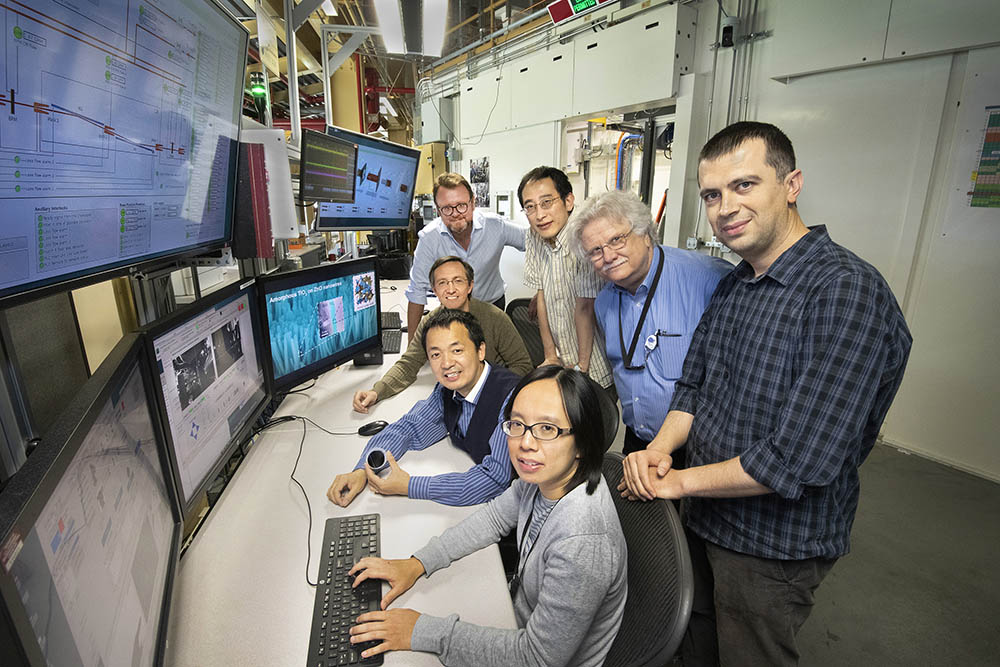 (Sitting from front) Iradwikanari Waluyo, Mingzhao Liu, Dario Stacchiola, (standing from front) Mehmet Topsakal, Mark Hybertsen, Deyu Lu, and Eli Stavitski at the Inner-Shell Spectroscopy beamline of Brookhaven Lab’s National Synchrotron Light Source II (NSLS-II). The scientists performed x-ray absorption spectroscopy experiments at NSLS-II to characterize the chemical state of titanium dioxide (titania) coatings on zinc oxide nanowires. They chemically processed the nanowires to make the coatings—which boost the efficiency of the nanowires in catalyzing the water-splitting reaction that produces oxygen and hydrogen, a sustainable fuel—more likely to adhere. These characterization results were coupled with electron microscopy imaging and theoretical analyses to generate a model of the amorphous (noncrystal) atomic structure of titania.

Solar energy harvested by semiconductors—materials whose electrical resistance is in between that of regular metals and insulators—can trigger surface electrochemical reactions to generate clean and sustainable fuels such as hydrogen. Highly stable and active catalysts are needed to accelerate these reactions, especially to split water molecules into oxygen and hydrogen. Scientists have identified several strong light-absorbing semiconductors as potential catalysts; however, because of photocorrosion, many of these catalysts lose their activity for the water-splitting reaction. Light-induced corrosion, or photocorrosion, occurs when the catalyst itself undergoes chemical reactions (oxidation or reduction) via charge carriers (electrons and “holes,” or missing electrons) generated by light excitation. This degradation limits catalytic activity.
Now, scientists from Stony Brook’s Department of Materials Science and Chemical Engineering in the College of Engineering and Applied Sciences and the Center for Functional Nanomaterials (CFN)—a U.S. Department of Energy (DOE) Office of Science User Facility at Brookhaven National Laboratory—have come up with a technique for optimizing the activity of one such catalyst: 500-nanometer-long but relatively thin (40 to 50 nanometers) wire-looking nanostructures, or nanowires, made of zinc oxide (ZnO). Their technique—described in a paper published online in Nano Letters on May 3—involves chemically treating the surface of the nanowires in such a way that they can be uniformly coated with an ultrathin (two to three nanometers thick) film of titanium dioxide (titania), which acts as both a catalyst and protective layer.
“Nanowires are ideal catalyst structures because they have a large surface area for absorbing light, and ZnO is an earth-abundant material that strongly absorbs ultraviolet light and has high electron mobility,” said co-corresponding author and study lead Mingzhao Liu, a scientist in the CFN Interface Science and Catalysis Group. “However, by themselves, ZnO nanowires do not have high enough catalytic activity or stability for the water-splitting reaction. Uniformly coating them with ultrathin films of titania, another low-cost material that is chemically more stable and more active in promoting interfacial charge transfer, enhances these properties to boost reaction efficiency by 20 percent compared to pure ZnO nanowires.”