Mircea Cotlet Named One of Battelle’s “Inventors of the Year”

Materials scientist Mircea Cotlet, an adjunct professor at Stony Brook University and a scientist at Brookhaven National Laboratory’s Center for Functional Nanomaterials (CFN) has been named one of seven “Inventors of the Year” by the global science and technology organization Battelle. In collaboration with Stony Brook University, Battelle manages Brookhaven Lab (BNL) through the company Brookhaven Science Associates. The annual awards recognize individuals who have made significant scientific or engineering contributions with important societal or financial impacts. 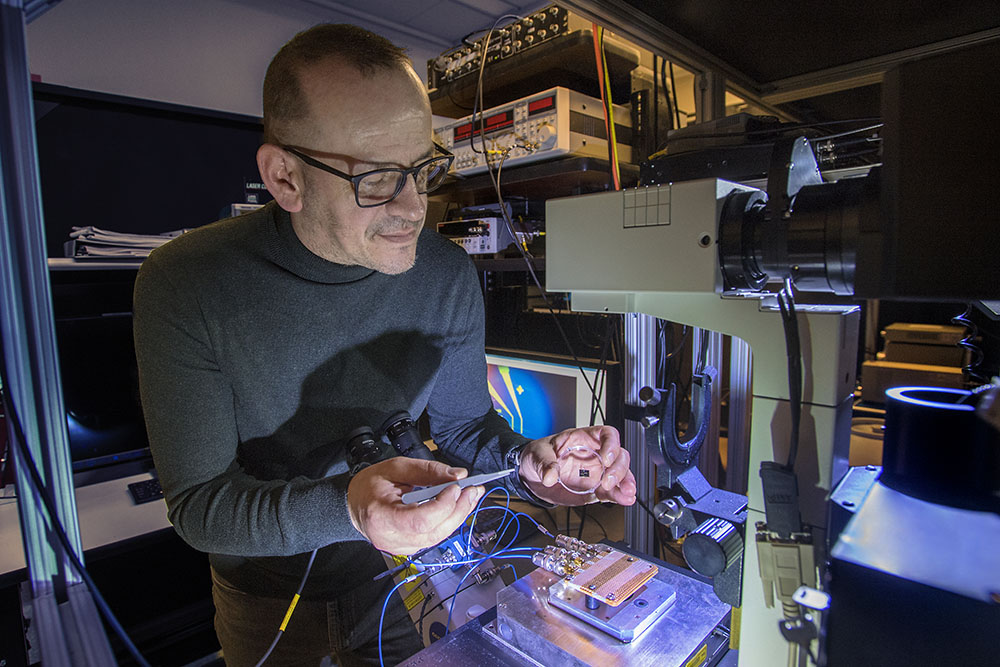 Cotlet, a member of the CFN Soft and Bio Nanomaterials Group, was recognized for his research in applying self-assembly methods to control the interfaces between nanomaterials and other components that interact with light, such as proteins and polymers. Self-assembly refers to the mechanism by which molecules, particles, or other components in a system spontaneously assemble into ordered structures according to the intrinsic interactions among the different components. The materials Cotlet focuses on are low-dimensional semiconductors, including graphene and other 2-D materials, 1-D nanowires (thin but very long nanostructures), and tiny 0-D nanocrystals called quantum dots.
“When you transition from bulk to atomically thin materials, you get into what is known as low-dimensional physics,” explained Cotlet. “At these low dimensions, strong light-matter interactions occur. In my research, I combine low-dimensional semiconducting materials together through self-assembly and look for emerging properties, or properties that do not exist in nature.”
Cotlet’s main interest is the interfacial phenomena—including charge and energy transfer processes—that exist in these “nanohybrid” materials. To characterize these processes down to the single-molecule level, Cotlet has developed high-sensitivity and high-resolution optical imaging and probing techniques, including one that can be used to distinguish between the two interfacial processes.
By first understanding the interfacial phenomena and then devising approaches to control them, Cotlet seeks to engineer next-generation materials with enhanced optical and electronic properties for solar harvesting, solid-state lighting, plasmonics, and sensing applications. His research has led to patents on self-assembly methods for improving the responsivity of photodetectors, the energy-conversion efficiency of solar cells, and the transparency of solar panel windows.
Cotlet obtained a PhD in physical chemistry from Katholieke Universiteit (KU) Leuven in Belgium in 2002, and master’s and bachelor’s degrees in physics from Alexandru Ioan Cuza University of Iasi in Romania in 1996 and 1995, respectively. He was a visiting postdoctoral researcher In the Chemistry Department at Harvard University before becoming a director’s postdoctoral fellow and then a technical staff member at DOE’s Los Alamos National Laboratory. In 2007, he joined Brookhaven Lab as an assistant scientist at the CFN, which had just opened. By 2014, he had been promoted to scientist with indefinite appointment. Since 2010, he has also served as an adjunct professor in the Materials Science and Chemical Engineering Department in the College of Engineering and Applied Sciences at Stony Brook University.