Honoring more than 1700 talented graduates and sending them on their way to a world of opportunity, Stony Brook University held its 22nd annual December Commencement ceremony in the Island Federal Credit Union Arena on Friday, December 20. The graduates will join more than 190,000 alumni whose knowledge and skills are currently shaping our future.

In total, 1740 degrees were granted, including 1040 bachelor’s degrees, 540 master’s, 120 doctoral and professional, and 60 certificates.
“One of the most profound elements that connects us is the extraordinary diversity of our community,” said Interim President Michael A. Bernstein as he addressed the assembled students.
“Many of today’s graduates are part of our robust international student population,” he said. “Despite our current political challenges, I am proud that we remain the living embodiment of a global institution. The diversity of our community helps all of us to thrive.”
The graduates ranged in age from 19-year-old Quoc Trung Tran, who earned a BA in Economics, to Miriam Steinberg, 65, who was granted an MFA in Creative Writing & Literature. 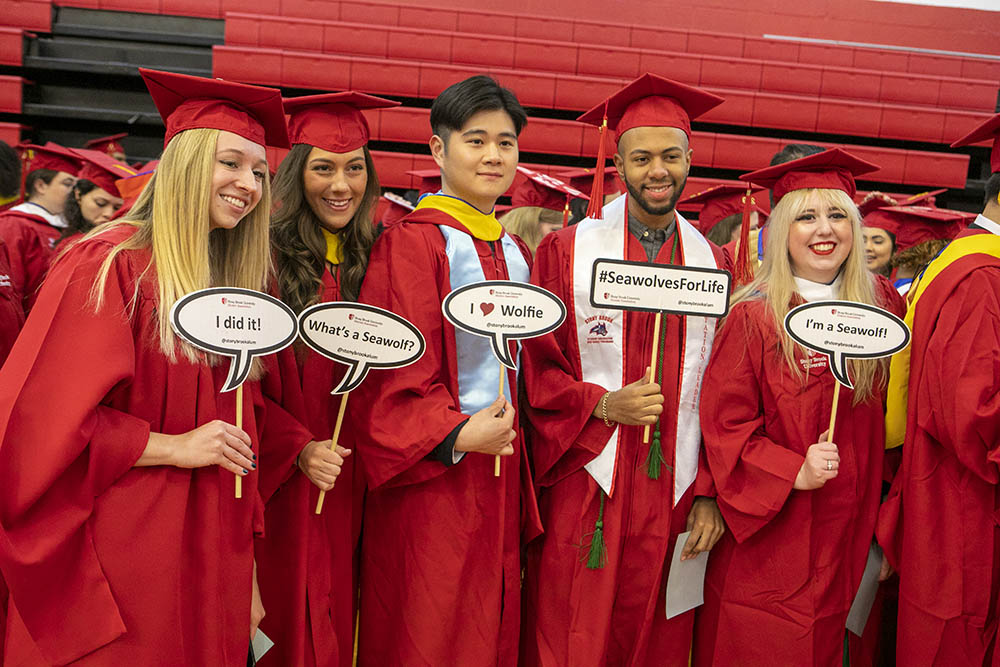 The student speaker was Isabella Bouklas, a Psychology and Sociology major with minors in Philosophy and Women’s, Gender, and Sexuality Studies. Among many roles on campus, Isabella dedicated much of her time to educating the campus community on the effects of toxic drinking through her involvement in the Red Watch Band Care team and as an intern for the Center for Prevention and Outreach.
“College teaches that we must revisit everything we think we know,” said Bouklas.
Remarks were also delivered by U.S. Senator Charles Schumer (D-NY), who congratulated the Class of 2019, described his own path to success and hailed Stony Brook as “one of the best universities, not only in New York, not only in our country, but in the whole world.”
“Behind each of your degrees is a story of hard work, passion, determination, and perseverance,” Bernstein said. “Whether you bonded over your academic endeavors or campus events, you are now linked inextricably through your time at Stony Brook.”