Measles Outbreak – Why it Happened and What to Do

According to the Centers for Disease Control (CDC) as of April 26, 2019, there have been 704 cases of measles reported in the United States. This is the greatest number of cases since the disease was thought to have been eradicated here in 2000.
Measles can come into our communities in different ways. The most recent outbreak has been traced to overseas travelers who contracted the virus and then visited or returned to the U.S. The disease then further spread in communities where there are unvaccinated people. 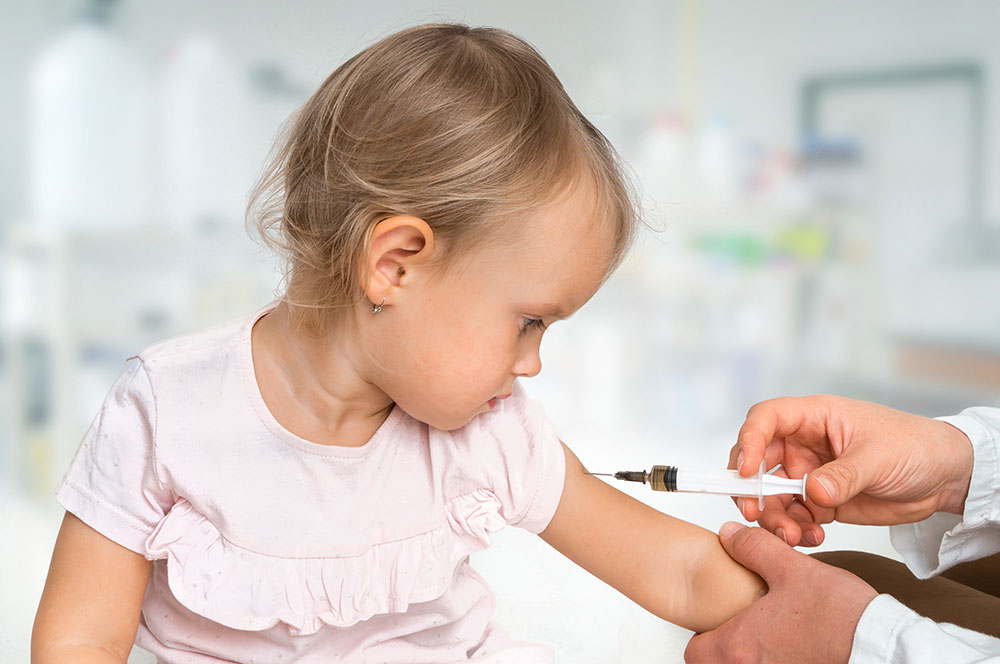 A child receives a vaccination

The fact is, measles is now here in the U.S. and continuing to spread. If you have not received the proper vaccine doses or, if you did not have a medically confirmed case of the measles, you are at risk.
Sharon Nachman, MD, Division Chief, Pediatric Infectious Diseases and Director, Office of Clinical Trials at Stony Brook Children’s Hospital, is an international leader in the area of pediatric infectious diseases. Here are her answers to some of the questions about this infection and the outbreak.
Who could get the measles?
Anyone who hasn’t been properly vaccinated with two doses of the measles, mumps, rubella (MMR) vaccine, or who hasn’t already had a medically confirmed case of the measles.
In addition, these groups are also considered vulnerable:

Note: People born in the U.S. before 1957, when measles was common in the U.S., are considered at low risk. They should speak with their doctor to see if vaccination is recommended.
How contagious is measles?
Very. The measles virus is spread through the air, can travel more than 60 feet and can live in a room for several hours. Now that the weather is nicer, people are getting out more and having contact with others. This means there is more likelihood that additional cases will be seen.
Even if  you have been exposed, if you get the vaccine quickly, you may be able to avoid coming down with measles. But you should call your doctor first – don’t just show up at the office or at an urgent care facility – because you could end up exposing everyone in the waiting room.
Is measles dangerous?
Yes. While some people may have mild symptoms, others can have severe or even life-threatening ones. These include measles, pneumonia and measles encephalitis. One particularly disturbing consequence of contracting measles at a young age can be the development of subacute sclerosing panencephalitis (SSPE). This progressive neurological disorder of children and young adults affects the central nervous system. Patients develop a severe brain infection six to 10 years after having measles, which can lead to profound mental and physical deterioration and eventually coma and death. It is estimated that 1 in 500 to 1 in 1,000 children who had measles will develop SSPE.
But don’t most people get vaccinated? Won’t community protection work?
That used to be the case. In fact, so many people were vaccinated the disease was considered gone in the U.S. by the year 2000. But unfortunately, there has been a widespread movement among people who believe that vaccines are harmful, so they refuse vaccination for themselves and/or their children. Or they think that because others are vaccinated and won’t get the disease, they will be safe as a result of community protection. In addition, people are traveling more – and may visit a country where measles is still a problem. Today expecting community protection is no longer reasonable with the current levels of community vaccination for measles.
What are the symptoms?
People with measles may have initial symptoms that are typical of many viral illnesses such as irritability, cough, runny nose and conjunctivitis. They are already highly infectious to others at this time. The rash people generally associate with the disease starts on the head and spreads down through the trunk of the body, usually at the peak of respiratory symptoms (two weeks after exposure), about three days into illness. In other words, well before the rash appears, people in contact with the sick person may have already been exposed.
Is the measles vaccine truly safe?
Yes. The measles vaccine is actually a combination vaccine, called MMR, covering measles, mumps and rubella (German measles). It’s considered very safe and, when administered according to the schedule recommended by the Advisory Committee on Immunization Practices (ACIP), can provide 97 percent protection from measles.
It’s also important to note that there are no and never have been preservatives, such as thimerosal, a mercury-based preservative, in the MMR vaccine. A widespread myth is that some ingredients in vaccines cause autism. However, multiple scientific studies have shown no link between any vaccine ingredient and autism.
How do I know if I’m protected?
If you think you’ve been exposed, be sure let your doctor know – and find out your vaccine status if you’re not aware of it. Even if you have not been recently exposed, but you fall into one of the at-risk categories mentioned previously, ask your doctor if you should have the vaccine. If you care for or have regular contact with at-risk people (e.g., young babies, elderly people or people who have suppressed immune systems) make sure you mention that to your doctor as well.
Read original story at Stony Brook Children’s