Marshall Leonard, MD ’16: From Scoring Goals to Achieving Them 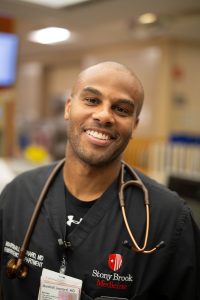 When it comes to chasing his dreams, Marshall Leonard, MD ’16, is not afraid to take a nontraditional path.
At 41, Leonard has already achieved two lifelong goals: playing professional soccer and becoming a physician — and there is no end in sight.
After receiving his undergraduate degree from the University of Virginia, Leonard was drafted by the New England Revolution to play in Major League Soccer. For the next five years, he worked hard to improve himself — both on and off the field. Throughout this journey, his interest in medicine had the opportunity to flourish. As a professional athlete, he would visit patients in hospitals, piquing an interest he had developed early in life. So, when he retired from soccer, he already had a plan for his next career.
Although the journey was indirect, Leonard found his way to Stony Brook University’s Renaissance School of Medicine as a nontraditional student, where he earned his MD and now works as an emergency doctor.
Tell us about your journey from professional soccer player to physician.
Growing up, I was always curious about the human body and medicine in general. As an athlete, I was especially interested in how our bodies move and heal after injury. I ended up taking a year of premedical courses as an undergrad, but I found it difficult to balance the rigorous coursework with being a collegiate athlete. I ultimately graduated early, and in 2002, I was drafted by the New England Revolution in Boston. Playing professionally for a number of years was a highlight of my life, and I enjoyed every minute of it.
While I was playing, I was constantly thinking about what would come next. I went on to complete a post-baccalaureate program and was accepted into the School of Medicine at Stony Brook. At that time, my wife and I had two daughters, so there were plenty of reasons not to pursue medicine, but I’m so glad I did. It’s been a very indirect route, and from the outside, it may seem strange to go from being a professional athlete to becoming a doctor, but I’ve met other athletes who have taken a similar path, so it’s not too far-fetched.
How did your experience as a professional athlete help you become a better medical student and doctor?
I wasn’t the best professional soccer player out there, but I could understand my strengths and weaknesses, so I always strived to improve and progress myself to something greater. I think this mindset translates to both academics and clinical settings. There’s a lot that goes into medical school, but I have always enjoyed the process of getting better more than working toward an end goal. As a physician, there’s no endgame; there will always be new experiences.
My time as a college athlete also taught me valuable skills that have translated to my current work. Managing your time is critical for studying and for being accomplished on the field. Later on, that helped me balance medical school and having a family. But, of course, I’ve had my ups and downs, just like everyone else.
Can you tell us more about your experiences at the School of Medicine as a med student and a physician?
I attended the School of Medicine from 2012 to 2016. While much has changed, the core of what the school represents has not. Stony Brook is a family, and as a nontraditional student, this culture at the hospital and within the school was extremely important to me. Beyond that, my clinical experience at Stony Brook has been excellent.
What was the defining moment for you — when you knew this was what you were meant to do?
Several things drew me back to medicine, including professional ambition and the desire to be a better person. But I had no intention of returning to medicine while playing Major League Soccer.

There was a young boy who was one of my fans. I wasn’t the star, but I was a role model for him, which was really cool. I had the opportunity to meet him and his father at a fan’s day. A few months later, I was invited to meet a fan at Providence Children’s Health. It was that same little boy. It turns out he had an inoperable brain tumor. I became pretty close to his family, but sadly, he passed away a few months later.

While this experience was not the only thing that pushed me toward medical school, it helped center me and provide me with more perspective. I realized that, if you have the ability and the curiosity to do something more, it’s worth investigating. I still keep in touch with his father, and he has followed along with my journey through medical school.
Your father is a doctor as well. What does it mean for you to follow in his footsteps?
As a kid, I was aware that my father was a physician, but he never walked around like he was a doctor outside of work. As a neonatologist, families would approach him in our small town of Columbus, Georgia, to reintroduce him to their child, who he had helped years before. That stuck with me. It was cool to see how much respect people had for him.
Now, as an adult, I’ve had the opportunity to learn from his experience and wisdom. Our conversations have a certain level of understanding. We can talk about medicine, but also how to balance being a physician with life as a father. Because our work can be overwhelming, he’s taught me to check myself at all times.
What was it like to be an emergency physician at the height of the pandemic?
It’s been a whirlwind for doctors, and everyone really. As emergency doctors, we had to be flexible and learn from our colleagues early on, and we had to lean on one another for support. Stony Brook University Hospital and the surrounding community banded together as a team. We all had a common goal — making things better as quickly as possible. It was heartwarming to see how much everyone supported one another, and we got through it all together.
What are you most proud of in your work?
I’m happy that I’ve been able to accomplish my goals with the support of my wife and family. First, I wanted to play soccer at the highest level possible. Then, when I decided to pursue a career in medicine, I wanted to become a well-rounded physician. I’m proud that I’ve been able to do that — but there is no endgame for me. I want to keep growing.
I’m also really fortunate to have made such great friends during my time in med school. I still keep in touch with many of them, and they are doing incredible things, both personally and professionally. Stony Brook graduates represent a lot of great physicians across the country, and I’m very proud to be a part of that.
So, what’s next for you?
I was fortunate to complete a fellowship in sports medicine before becoming an attending in Stony Brook’s emergency department. As a result, I’ve continued a partnership with the orthopedics team and was able to develop a musculoskeletal injury program within the emergency department.
I want to continue that work by teaching residents and med students how to treat these injuries in an acute setting. I have so many different ideas and experiences that I want to have throughout my life, including within the hospital, so I’m excited to keep going.
-Kristen Brennan

Your gift, no matter the amount, matters. To learn more about supporting the Renaissance School of Medicine, click here.