As a crescent moon rose above the campus on November 8, the Undergraduate Student Government (USG) at Stony Brook hosted its fourth annual Light the Brook event, continuing a tradition of lighting the Academic Mall as the fall semester winds down.

On a stage set by the fountain, several student and university leaders addressed a large group of attendees who were treated to brownies and hot chocolate, all gathered to celebrate the Seawolf community. 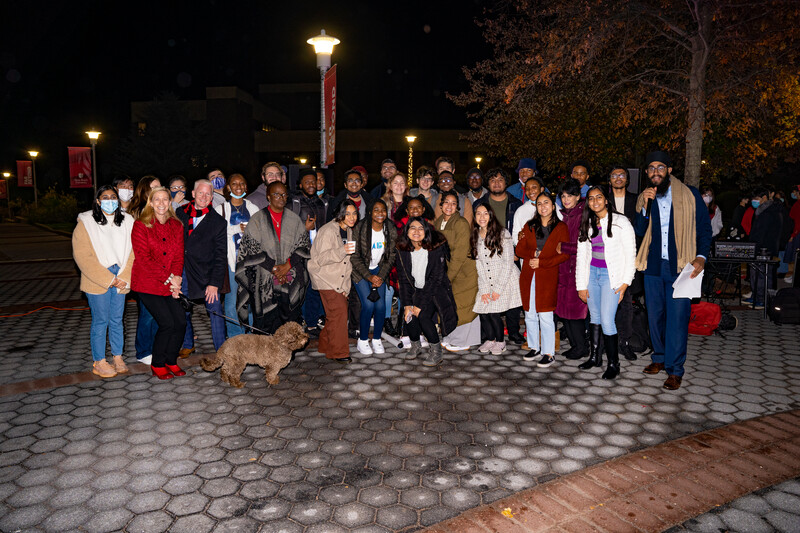 All photos by John Griffin

Anne Green ‘22, an environmental design major in the Honors College and chief of staff of the USG, welcomed the crowd and kicked off the event.

“Light the Brook instills a sense of community and belonging,” she said. “How different this semester has been with the vibrant energy that comes with being back in person. We aim to connect the ties of diversity among the student body and represent how we are all connected every day.”

“Last year Light the Brook was one of the few in-person events we had,” said President McInnis. “I can’t tell you how great it feels to see so many students gathered here tonight to honor the spirit of Stony Brook. Tonight we celebrate being Seawolves and being together.”

“This is the largest crowd we’ve had since this event began,” added Rick Gatteau, vice president for student affairs. “It’s a pleasure being here with you as we bring life and Stony Brook pride back to campus.”

USG President Manjot Singh, civil engineering ’22, described the event as “encompassing the essence of Stony Brook at this time of year,” noting that it was expanded this year.

“Light the Brook provides a sense of reflection on how we have all shined and persevered through the last two years,” said Singh. “This year is extremely special, because we expanded it to include a total of 75 trees and light posts throughout the Academic Mall, many more than in previous years. And we included sustainable solar options as well.”

Attendees were also treated to performances by the Stony Brook Vocalists, a co-ed a cappella group; Jubilé Latino, a Latinx-Afro-infused dance team; and the Seawolves Marching Band.

Cheryl Chambers, associate dean of students/director of multicultural affairs, described the event as a time to recognize our diversity and remember all that unites us.

“Tonight is a testament to how the Stony Brook community has endured,” she said. “As we light the brook, we should also remember to be a light to each other.”