Katy Siegel Champions the Legacy of a Barrier-Breaking Artist 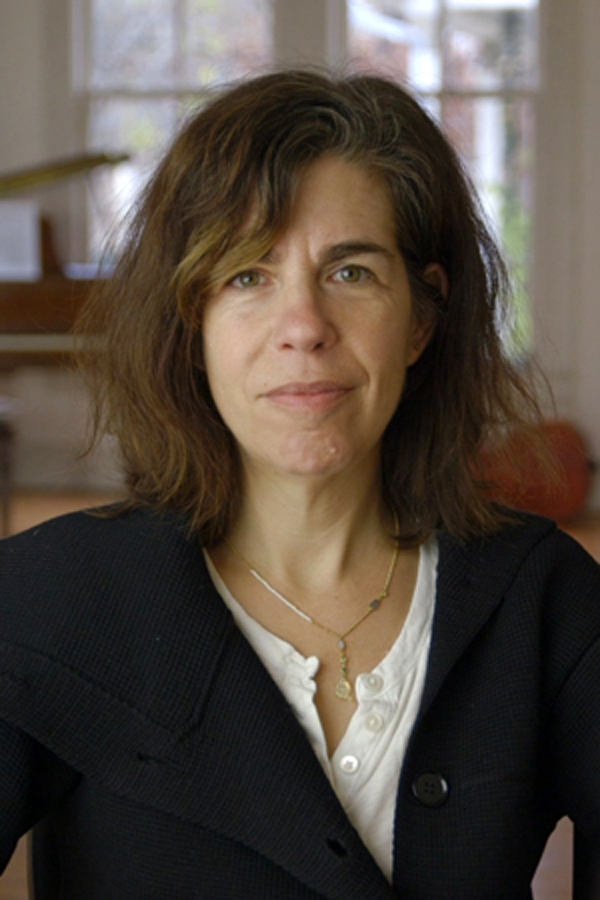 Joan Mitchell made her entrance in the New York art world of the 1950s, and moved between the United States and France for the next four decades as one of few female painters to gain critical and public acclaim. Her works can be seen in major museums and collections around the world and have sold for record-breaking prices. Yet despite success both during her life and after her death in 1992, she is not nearly as well known as contemporary expressionists, including Jackson Pollock and Willem de Kooning.
Katy Siegel, the Eugene V. and Clare E. Thaw Endowed Chair in Modern American Art in Stony Brook University’s Department of Art, is working to change that by bringing Mitchell’s rich legacy to a wider audience in an effort to ensure her recognition as an important and groundbreaking artist. As co-curator of the Joan Mitchell exhibition that will take place at the Baltimore Museum of Art from March 6 to August 14, Siegel hopes to provide a moving in-person encounter with Mitchell’s art that cannot be experienced on a screen. The exhibition was previously shown at the San Francisco Museum of Modern Art (SFMOMA) in 2021 and will move on to Paris in the fall of this year.
“We originally set out to do the definitive Mitchell exhibition, and in doing so, show how she expanded abstract painting to speak to deep experiences that are unnamable and difficult to express,” said Siegel. “Because the show opened after two years of social isolation, it was even more important to create an experience that encourages a reconnecting to our own bodies, feelings and natural surroundings. And of course, I want to reinforce the fact that a woman can be the very best at painting, or any important cultural form.”
With a team of seven researchers, Siegel and co-curator Sarah Roberts of SFMOMA took four years to consider more than 500 of Mitchell’s paintings across the United States and Europe. The result is a show that goes beyond her most well-known works to include rarely seen transitional works, sketchbooks, films, photographs, letters and some of Mitchell’s personal effects.
Though she has always worked on gestural painting, a way of making a painting that emphasizes the artist’s physical process and the qualities of paint, Siegel had an epiphany as she conducted research for Postwar: Art Between the Pacific and the Atlantic, 1945-1965, a 2016 exhibition held in Germany.
“I realized that seen from outside the usual US-based perspective, the accepted wisdom of ranking the importance of different artists was simply wrong,” she said. “This slightly younger female painter was in fact not a follower, but the very greatest among mid-century gestural painters. Mitchell’s transnational experience, as well as her athleticism, deep feeling for poetry and music, and ambition make her unique.”
The Mitchell exhibition has an award-winning catalog co-edited by Siegel and Roberts (Yale University Press, 2021) which explores the ways that Mitchell pushed painting beyond abstract expressionism. In addition to Siegel, two Stony Brook art history graduate students have essays in the volume, and several more helped with the research.
“Katy Siegel’s catalog on Joan Mitchell is a triumph, combining impressive documentation of her paintings including several large foldouts, with contributions from fields beyond art including music and poetry,” said Margaret Schedel, associate professor in the Department of Music and chair of the Department of Art. “Reading it gives you a true sense of the artist, the time period she lived in and her legacy.”
Siegel cited what she calls Mitchell’s “hard-won skill” as a major part of the appeal.
“Mitchell painted for four decades, every day, and with great discipline and seriousness,” said Siegel. “She knew what every possible color would do next to every other color, and her paintings are increasingly beautiful, risk-taking and ambitious, right up to the very end of her life.” 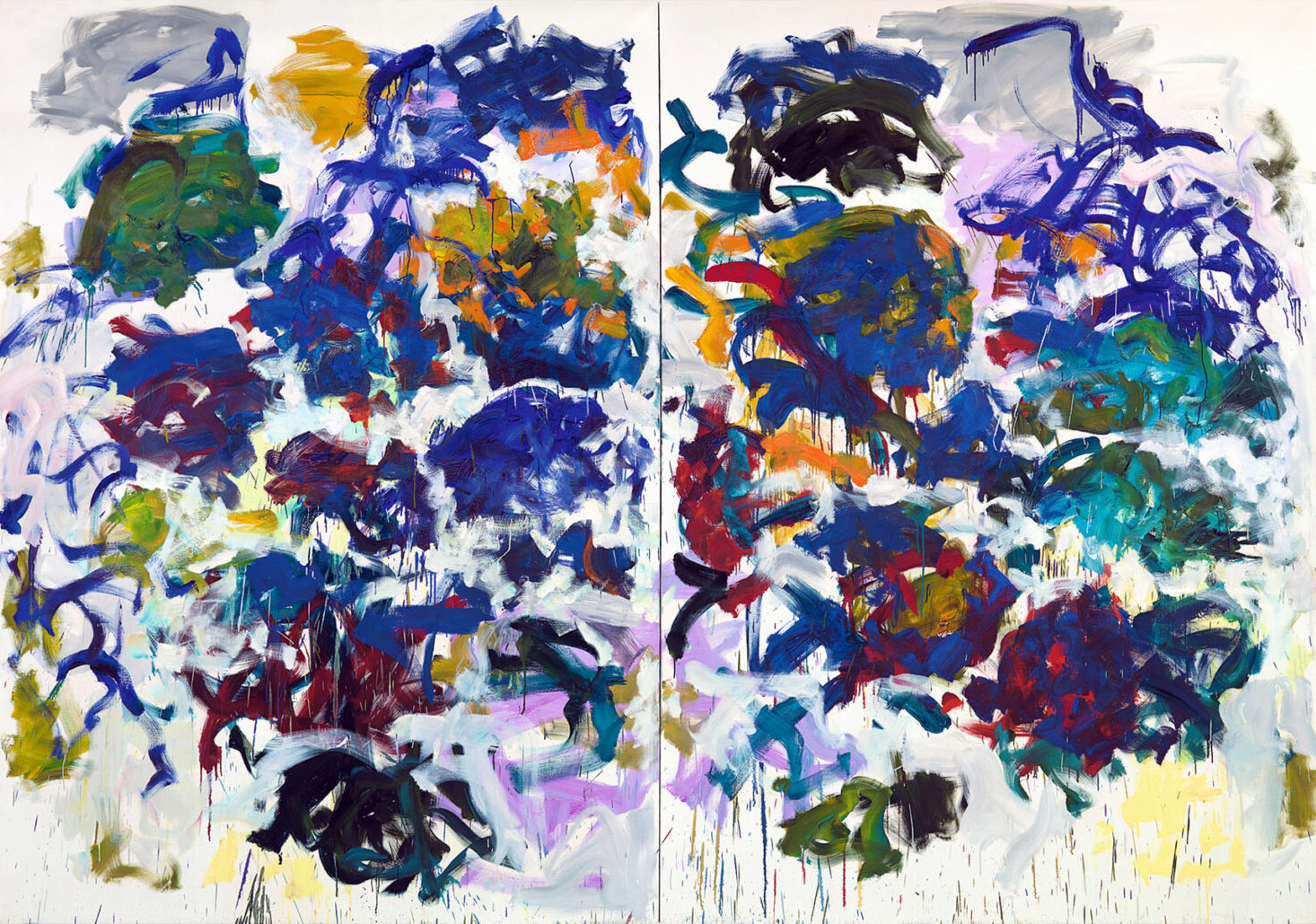 ‘Sunflowers’ by Joan Mitchell. Image courtesy of the Baltimore Museum of Art.

Siegel’s scholarly focus is on artists from underrepresented populations — primarily women and Black Americans — long excluded from the modern canon of art history as taught in universities and exhibited and collected by museums. Illustrating Stony Brook’s commitment to diversity and becoming a leader in the study of modern American art, Siegel was installed as the inaugural holder of the Thaw Endowed Chair in 2016. She describes her five years in the position as transformative.
“The Thaw Chair has allowed me to focus on research in one of the realms that Gene Thaw most valued: postwar painting,” said Siegel, pointing out that it was Thaw himself who gave Mitchell her first gallery exhibition in 1952. “That research, in a series of projects including the Postwar exhibition, the Venice Biennale and Joan Mitchell, has expanded and changed our vision of that area to be more equitable and expansive.”
The position has also enabled her to facilitate opportunities for graduate students who have gone on to become part of the art world.
“A year out of college, I read professor Siegel’s Since ‘45 (2010) and was specifically struck by a chapter in which she dissected the historic paradoxes within postwar American society, which had evolved into what I was experiencing at that moment as a participant in the contemporary art world of 2016,” said Anastasia Kahn ’19, who left Los Angeles to learn from Siegel as a master’s student. “She helped me foster connections with museum curators both before and after I graduated, which was pivotal in securing my current position at the Museum of Contemporary Art in Los Angeles.”
“Professor Siegel was the ultimate PhD advisor,” echoed Amy Rahn, ’19. “She challenged me in pursuing the highest level of academic research and also the highest ethical standard for participation in our field. She showed how to shape every minute and word toward the advancement of the field of art history. The sheer volume and quality of her work is a testament to her extraordinary power as a scholar, curator, writer, teacher, advisor and collaborator.”
For undergrads, Siegel’s goal is to plant the seeds for an appreciation and love of art. She began her studies as a musician, and believes that art has the same potential for connections to a broad audience.
“I hope to instill an excitement about art, conviction about its social relevance and its imaginative possibilities,” she said. “And especially the feeling that each student themselves has something important to contribute to those conversations.”
— Robert Emproto