The first enslaved Africans arrived in New Amsterdam in 1626. For 200 years slavery was part of life on Long Island. Since its abolition, slavery has faded from local memory, largely forgotten or ignored. 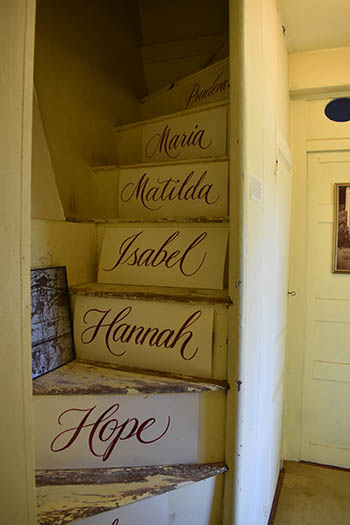 The slave staircase at Sylvester Manor on Shelter Island was dedicated to the few known slaves who lived there.

But the history is there, if you know where to look.
Seventeen students from Stony Brook’s School of Journalism this year set out to rediscover some of that history and reveal parts of a story that has almost been lost. Some of their work recently aired on WSHU, the National Public Radio station that serves Long Island.
“Those of us who live here don’t think of slavery as something that happened here. The way that we are taught or the way that we choose to think about it is that slavery happened far away, it was something in the South,” said Terry Sheridan, WSHU news director and SBU journalism instructor. “It was prevalent here. It was an important part of the Long Island economy and the economy of the Northeast.”
“There are things today in our society that are the result of slavery,” he said. “The legacy continues. It’s something many of us don’t think about, but we have to if we are going to have an honest conversation about race in this country.”
Inspired by the New York Times’ 1619 Project and her own research for a forthcoming book, Karen Masterson, assistant journalism professor, asked her students if they wanted to tackle a similar project focused on slavery on Long Island. They responded with a resounding yes.
“The 1619 Project didn’t look at slavery on Long Island; the New York Times kind of had its back to the island and they were looking across the rest of the country to tell those stories. So we thought, well, let’s do it ourselves,” Masterson said. “For me, the reason to do this work was to correct the history books these kids all went to school with and that skip over this aspect of our history.” 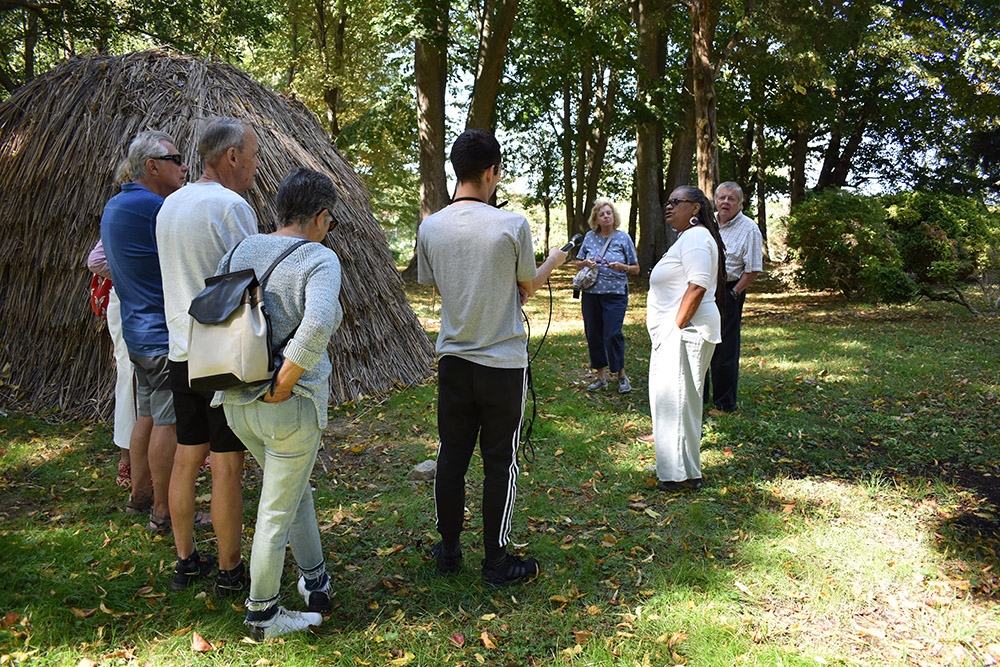 A journalism student records Sylvestor Manor curator Donnamarie Barnes (second from right). Sylvester Manor was one of the few plantations on Long Island and the first to have enslaved people.

Though the class was originally focused on written journalism, they transformed it into a multimedia course. Students completed written and multimedia pieces in the form of radio broadcasts, podcasts and videos.
“It was intense, and going out east every weekend was a huge timesucker,” said Brianne Ledda, a senior journalism major. “But it was so amazing, and I really did love the class. I’m grateful that I had a chance to work on it. I grew up here, and I didn’t know about most of these things. Everything I learned was exciting to me.”
Over the fall semester, students uncovered and reported on a reparations bill in the state legislature, controversy over the existence of a Long Island branch of the Underground Railroad, the efforts of two African Methodist Episcopal churches to preserve their histories, and one Black woman’s quest to uncover her ancestry, among others. 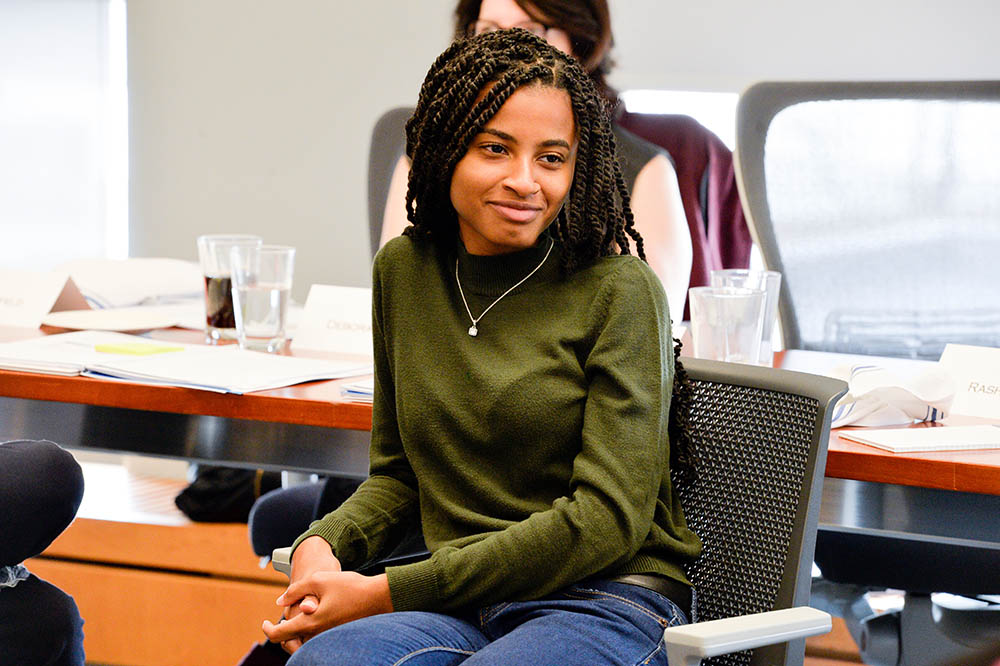 “I think the biggest takeaway for me was that all this history was kind of hidden,” said Wilko Martínez-Cachero Vas, of Madrid, who graduated in May and plans to pursue a master’s degree at the University of Southern California. “It was humbling to be able to talk to the descendants of the enslaved people and write their stories to give voice to what happened.”
Made possible by a grant to expand experiential learning from the MJS Foundation, the Slavery on Long Island project builds on the School of Journalism’s efforts to engage students in real-world reporting experiences beyond the classroom. The grant previously supported a project about the Long Island Pine Barrens, another timely topic of public interest to Long Island residents. 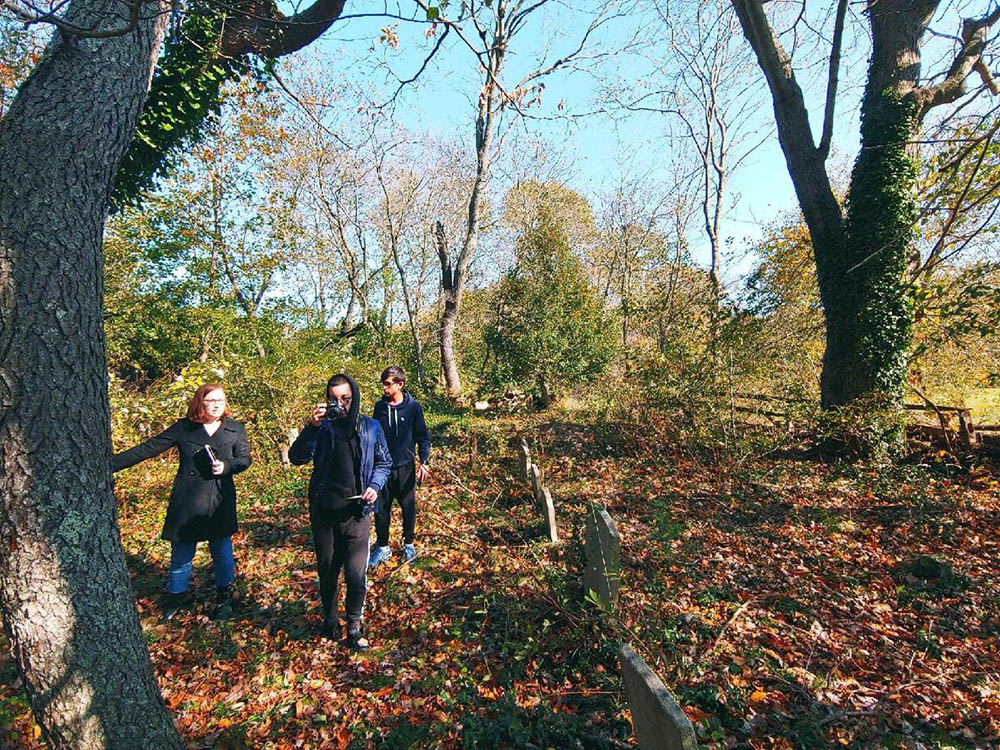 “As a School, we have a student population that wants to learn about slavery and about the African-American experience,” Masterson said. “We are mostly white instructors who have worked for mostly white editors. We have to be deliberate about bringing these experiences to our students and the Simons grant gave us the opportunity to do it.”
Over the semester, students spent hours pouring over databases and history books, including one written by SBU historian Jennifer Anderson. They spent hours in the car, traveling to different libraries and museums, visiting AME churches, attending NAACP meetings, crawling through the woods to find overgrown cemeteries, and talking to as many people as they could.
“It did seem like we were working in a real newsroom and that we were professional journalists. We were going out in the middle of class, taking calls because we couldn’t miss our sources,” said Gary Ghayrat of Centereach, who graduated in May. “Once we broke through the reporting process and looked at what we’d collected and what we could piece together, it was really satisfying. But at the end it was still scary. Did we miss something? Did we mischaracterize something? There’s so much more to report and we’re only telling one small part of the story.” 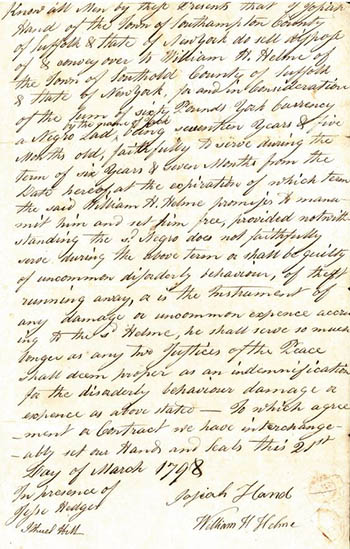 “I can only hope we did it justice.”
All of the pieces were reported with close attention to journalistic standards with an eye toward giving students a chance to feel the island’s history. Several said they connected deeply with their stories and that they hoped their work would raise awareness and inspire others.
“It’s so surreal. If you go back in my family history, I’m related to Thomas Jefferson. My great grandfather on my dad’s side, the Rev. Claude William Black Jr., was a civil rights activist who spoke with Martin [Luther] King and the FBI infiltrated his organization. On my mom’s side, we’re Haitian and one of my ancestors, Paul Romain, signed the Haitian Declaration of Independence. So all of this – slavery, fighting for independence and fighting for rights – is part of my family history,” said Kiara Thomas, a senior journalism major and Africana studies minor from Addisleigh Park, Queens. “It’s very important to know that this isn’t a one-person thing. It’s a collective job and that’s how change is going to occur – we need to get the people who are privileged to realize their privilege and use it to help other people.”
— Lori Kie