It’s a fact: The incidence of cancer among African-Americans is higher than that of any other racial or ethnic group in the U.S. One reason, experts say, is that a history of mistrust and disenfranchisement discourages people of color from seeking treatment promptly. But according to Jennie Williams, associate professor in the Renaissance School of Medicine and assistant dean for student diversity, there may also be differences at the genetic level.
“There are a number of different factors associated with racial health disparity, socio-economic status being one.” Williams said. “However, we have shown that when you correct for socio-economic status, as well as access to healthcare, racial health disparity still persists.”
Stony Brook University’s INDUCER program (Increasing Diversity in Undergraduate Cancer Research Education and Research) aims to tackle the issue head-on, in both its social and genetic dimensions. Led by Williams, INDUCER is researching the genetics of cancer as it builds a diverse population of faculty and clinical investigators with sensitivity to racial disparities in healthcare. 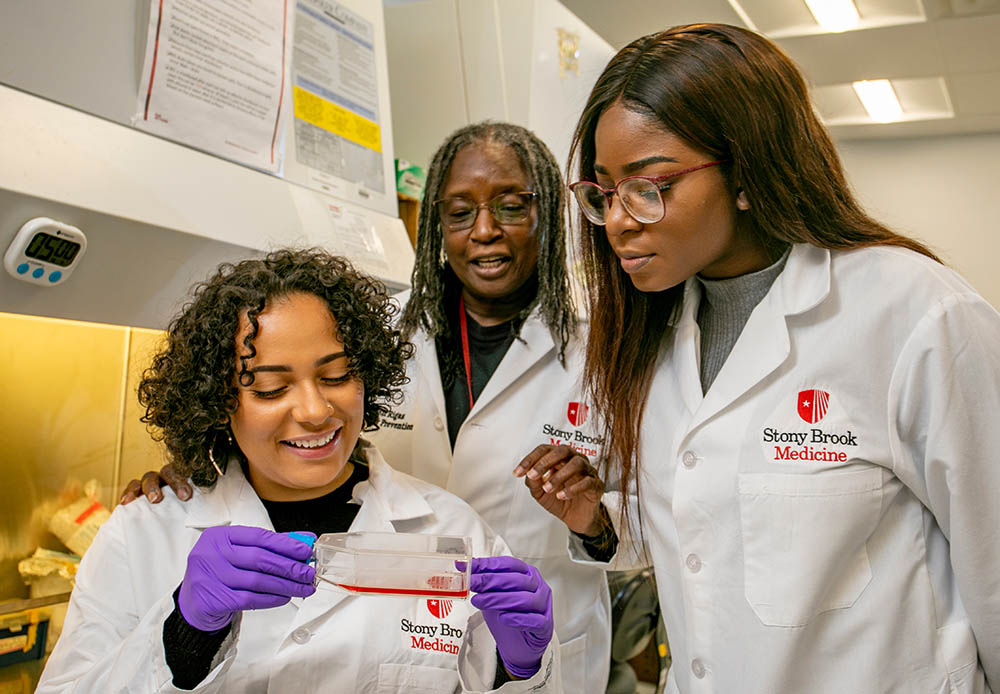 Ensuring diversity in key positions within the University and hospital fosters a sense of kinship between faculty/physicians and students/patients, Williams said. INDUCER recruits highly qualified underrepresented minority students who are pursuing research careers in the biomedical sciences, with an emphasis on the biology of cancer. Ultimately, the goal is to place such students in the preeminent graduate/medical programs in the nation, seeding a new generation of medical professionals who will help engender systemic trust among doctors, researchers and patients.
“In order to have diverse ideas, diverse research choices, we need to have a diverse work force,” Williams said.
Addressing the disparities is not simply a matter of recruitment, Williams said. When she began performing cancer research under her mentor, Basil Rigas, William and Jane Knapp Professor of Pharmacology and Professor of Medicine at Renaissance School of Medicine, she was examining cancer chemoprevention using commercially available cell lines.
“We had great results, but one of the problems I noticed was that all of the cell lines used in our assessment were Caucasian,” she said. “I called the company and tried to figure out how we could get diverse cell lines.” When that didn’t seem feasible quickly enough, Williams’s team ended up generating their own cell lines from African-African and Hispanic people, using surgical discards from the hospital. That process continues via INDUCER.

Through the two-year-old program, a dozen students are currently working with research faculty mentors. “Each year we acquire six, and six will graduate. This will continue for the next three years, at which time we will seek funds for continuation,” Williams said. The research is funded through the National Cancer Institute’s Center to Reduce Cancer Health Disparities. 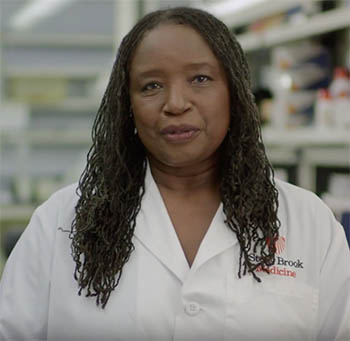 Tiana Reyes ’20, a biology major who has studied under the mentorship of Williams since 2017, had a highly personal reason to undertake research on cancer biology and cancer health disparities — her mother died from breast cancer when she was 11 years old.
“That fueled my interest in science, to understand how cancer can come to be, and how I can make a difference in the lives of people that are suffering,” said the East Meadow, N.Y. native.
Julie (Chinyere) Nwaogbe ’21, a first-generation American of Nigerian descent, heard the message on two fronts. “I decided to join INDUCER because I knew that doing research would make me a better candidate for medical school,” she said. “But also because racial health disparities have affected, and still affect, my friends and family. I want to be an integral part of mitigating the issue.” She works with Grace Gathungu, an assistant professor whose specialty is pediatric gastroenterology, conducting preclinical studies for an anti-inflammatory drug called quercetin in colitis and cancer models.
For Gathungu, who practices in an area that serves many patients from migrant farm families, cultural representation is critical. She stressed the importance of using a translator to communicate effectively. “With certain bacterial cultures, even if not all members of the household are symptomatic, you have to treat the entire family. This has to be interpreted correctly,” she said.
While INDUCER works to attract prospective students who embody the program’s mission, it also works to alert the public to the need for early detection of cancer.
“Community outreach is critical,” Williams said. “We created a commercial explaining racial health disparity and colon cancer and the importance of getting a colonoscopy at appropriate times, monitoring what you eat, underscoring the need to exercise and all of the factors associated with increased cancer risk.”

To attract underrepresented students into the healthcare field, Williams and her colleagues also take pipeline programs to area high schools. Williams co-directs two other National Institutes of Health R25 programs — Bridges to Baccalaureate and IMSD-MERGE. Bridges to Baccalaureate targets students at community colleges to perform research at Stony Brook for the summer and continuing on to earn a BS and advanced degrees. IMSD-MERGE works to increase the number of underrepresented minorities earning graduate degrees in the STEM fields.
“Our success rate is pretty high. 80 percent of our students go on to a four-year health care degree with the Bridges to Baccalaureate program,” said Williams.
“My long-term hope for INDUCER is that we produce fabulous future physician scientists and researchers who are doing work that is inclusive of all racial and ethnic groups,” Williams said.