The Clean Energy Business Incubator Program (CEBIP) at Stony Brook University has brought its first seed company client into the marketplace, a “graduation” illustrating that a company sparked by an idea and a technology can build its prototype application and business plan through CEBIP’s guidance all the way to commercialization. ThermoLift, Inc., is now manufacturing a heating and cooling heat pump system for heating, ventilation and air-conditioning (HVAC) that can save up to 50 percent of normal energy costs.
CEBIP is funded by the New York State Research and Development Agency (NYSERDA). In operation since October 2011, CEBIP provides assistance and resources for developers of renewable and clean-energy technologies. 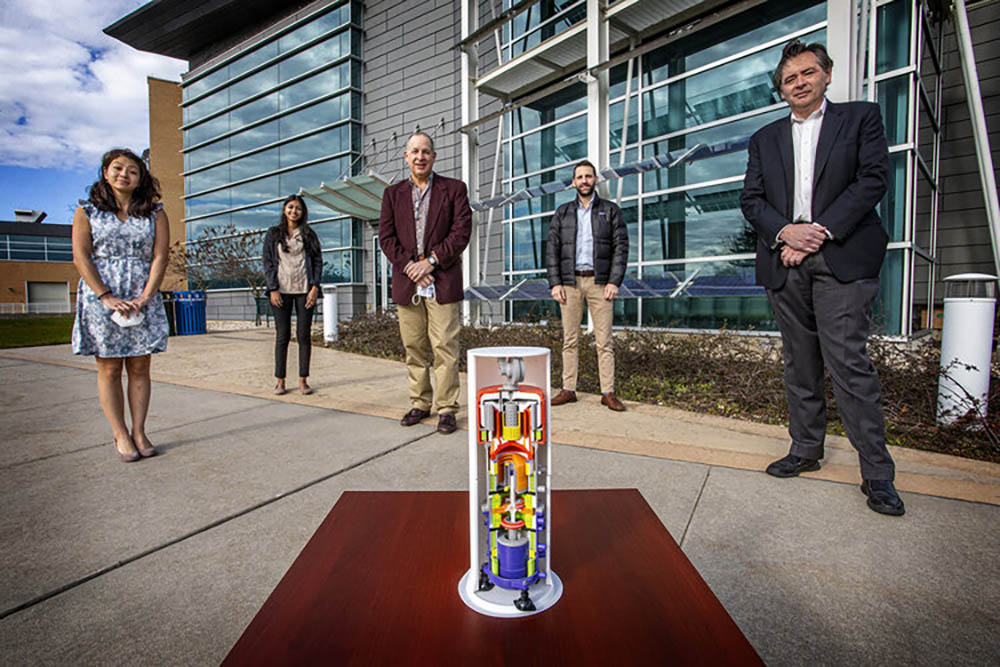 At the Advanced Energy Research and Technology Center and surrounding a model of ThermoLift’s pump for heating and cooling are, from left: Rebecca Leung, Deeksha Nanda, Paul Schwartz and Jon Haas of ThermoLift; and Dave Hamilton of Stony Brook’s Clean Energy Business Incubator Program.

ThermoLift was founded by Paul Schwartz, director of ThermoLift, and Prof. Dr.-Ing. Peter Hofbauer, inventor of the ThermoLift technology, in 2012, its first year as a CEBIP incubator company. Since that time, the patented TCHP™ system has been developed and improved multiple times at ThermoLift’s Stony Brook University Advanced Energy Research and Technology Center (AEC)-located laboratory. While an incubator company at CEBIP, ThermoLift raised millions in investment capital before rolling out its commercialization plan and received some $2 million in cumulative grant monies from NYSERDA, the Wells Fargo In2 incubator and utilities for company R&D.
The company created the TCHP system by developing a new thermodynamic cycle, the Hofbauer Cycle, to provide high-efficiency heating, cooling and hot water into one machine for commercial and residential HVAC systems. The potential for ThermoLift’s technology extends into industrial applications including refrigeration, food processing, pharmaceutical manufacture, cryogenics, liquefied natural gas and desalination.
During the first quarter of 2021, ThermoLift plans to complete upwards of up to 16 pilot installations of the unit. In 2022, it is hoping to complete around 100 installations at locations such as convenience stores.
“CEBIP has helped guide ThermoLift from its inception, from a business standpoint as well as with technological support from scientists, engineers and faculty affiliated with the AEC and the College of Engineering and Applied Sciences (CEAS),” says Schwartz. “We have the tools to achieve commercial success, and it is time for us to excel and move forward.”
From the start of its relationship with ThermoLift, CEBIP provided technology experts and fostered a relationship with Schwartz and faculty within the CEAS, particularly with Jon Longtin, Associate Dean for Research and Entrepreneurship at the CEAS. At their first official meeting in 2012, CEBIP introduced ThermoLift to the LI Angels Network and established an immediate opportunity for their first capital raise of $1.6 million.
“ThermoLift’s story as a CEBIP incubator company and its rise from what originally was a two-man company in Paul’s basement is a remarkable one,” says Dave Hamilton, Executive Director of CEBIP. “Paul and his team have enthusiastically worked closely with our CEBIP professionals over the years, utilizing many of Stony Brook’s economic development resources while achieving critical corporate and technology milestones driving them toward commercialization.”
While no longer an incubator client of CEBIP, ThermoLift will continue to have its research and corporate office within the AEC. It has opened a plant in Michigan to roll out manufacturing of the ThermoLift systems. In total, the company now has 32 employees in New York and Michigan combined.
Stony Brook CEAS students have played a key role in the rise of ThermoLift and their current status as an active company in the marketplace. Siddhartha Gadiraju, a CEAS student working under Professor Longtin, wrote and published thermodynamic papers on the company’s new technology as it was being developed and went on to pursue a PhD in combustion energy. Upon graduation, Gadiraju was hired by ThermoLift. To date the company has hired close to 20 Stony Brook students to fill their research, development and manufacturing team.
To graduate from CEBIP, a client is required to meet all of the following conditions: