Paul Kelton was working on a book about the cholera pandemic of the 1830s when coronavirus emerged.
“It’s been a surreal experience writing about a pandemic while one is going on,” said Kelton, professor and Gardiner Chair in American History in Stony Brook’s Department of History. 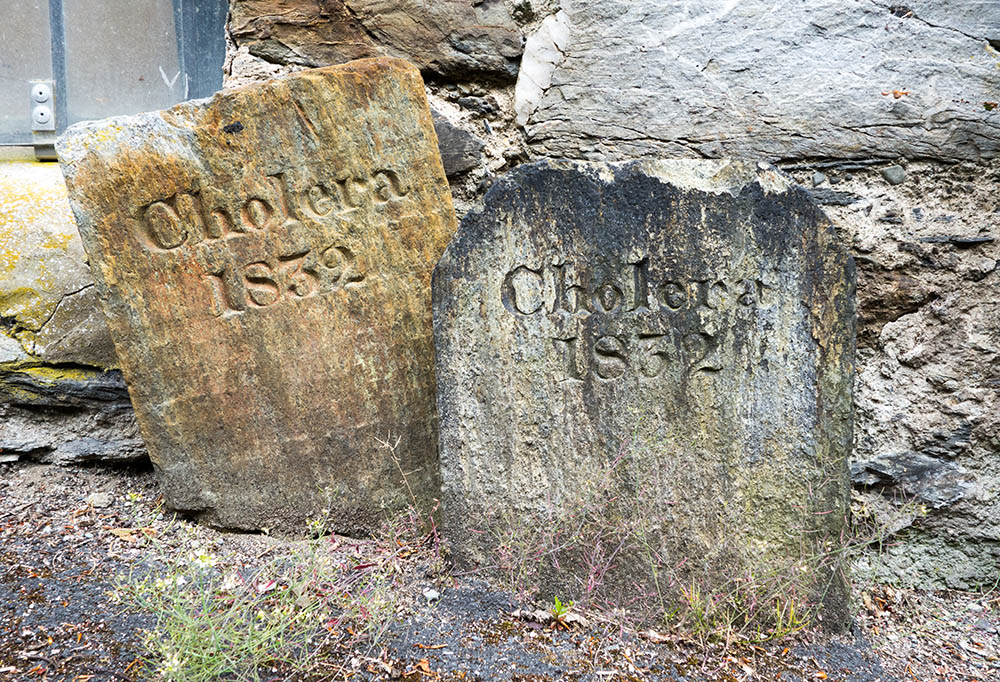 Gravestones dating from the cholera epidemic of 1832

The coincidence gave Kelton a unique perspective on both pandemics, a view that he shared with those who attended a May 27 online lecture titled “Pandemics Then and Now: What the Cholera Pandemic of the 1830s Can Teach Us.” Previously, Kelton has examined the biological processes involved in the European takeover of the Americas in two books: Epidemics and Enslavement and Cherokee Medicine, Colonial Germs.
In the lecture, Kelton sketched the broad contours of the cholera crisis, pointing out some parallels to the COVID-19 pandemic.
Unlike coronavirus, cholera is a bacterial disease typically spread through sewage-contaminated water. Kelton described it as a “wretched” experience for its victims, bringing voluminous diarrhea that quickly dehydrated its victims. Those afflicted would often die within 24 hours of contracting the disease.
“There are a lot of variables involved, but in this historic cholera epidemic fatality rates were about 50 percent,” he said. “It didn’t hit as many people as COVID-19 has, but it was a much more deadly disease.”
Historians generally believe that the first cholera pandemic began in South Asia in 1817, and from 1817 to the 1820s it was confined to South Asia. In 1830 it reached Moscow, where 8,000 cases were reported, resulting in 4,000 deaths. The disease eventually made the trip across the Atlantic aboard steamships, arriving initially in Canada. In late June 1832, the first case occurred in New York City, and a deadly outbreak followed. 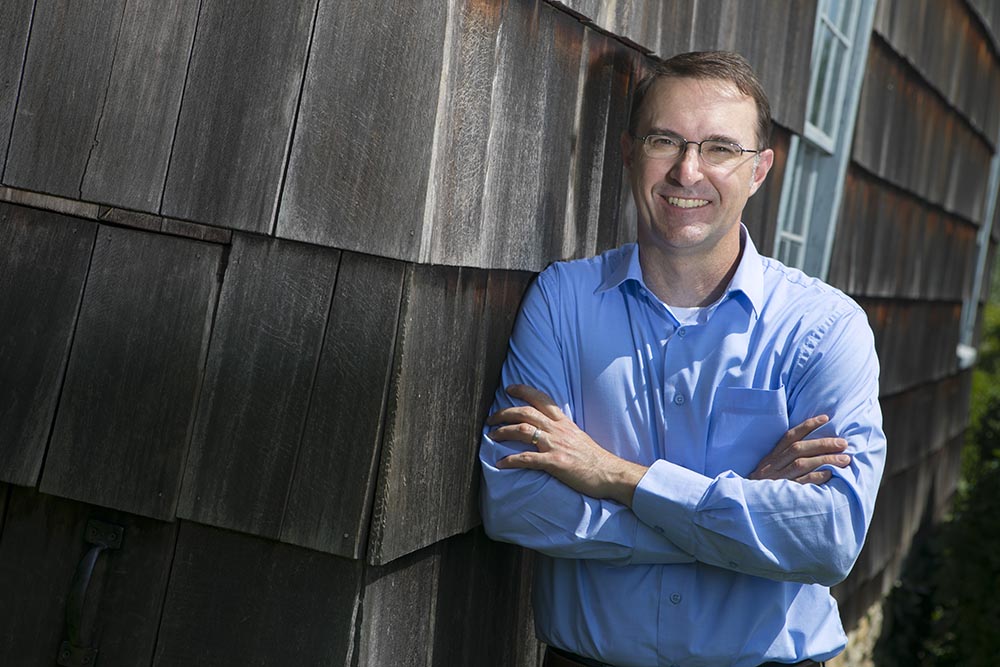 “Americans were reading about what’s going on in Moscow and the rest of Europe,” said Kelton. “Americans were well aware of cholera. But there’s a discourse that you see pop up with every pandemic, including COVID-19 — that it’s not going to impact me, it’s only going to impact people with certain conditions.”
In 1832, those conditions were identified as being “filthy,” “intemperate” or having bad diets. These were primarily afflictions of the poor. The association of cholera with poverty was partly correct, but not for the reasons people thought. The poor were disproportionately affected because they lived in areas where the water was contaminated.
By mid-July 1832 — the height of the disease in New York City — hundreds of people were dying each day. By the time the pandemic ran its course, about 4,000 city residents perished. As with COVID-19 almost 200 years later, the poor comprised a disproportionate number of the victims. Though cholera was traced through Asia, Russia and Western Europe, immigrants generally were not blamed for bringing the disease. However, native-born whites often disparaged Irish immigrants, not just because of their ancestry, but because of their social status and perceived predisposition to the disease.
“Irish immigrants suffered more cases and deaths than native-born whites,” said Kelton. “The latter claimed the former lived in squalor and drank alcohol — ethnic stereotypes. The reality is that poor people only had access to contaminated water. People who had the means fled the city and headed to resort towns.”
The accepted medical treatment for cholera was “bleeding” — literally withdrawing blood — which was believed to take some of the congestion away from the heart and allow the body to heal itself better, followed by a dose of calomel, a mercury chloride mineral used as a purgative.
“This is not modern medicine we’re talking about in the 1830s,” said Kelton. “The medicine was actually bad medicine, and it would make the situation worse. You had a lot of people that got nervous, called a doctor, got treatment, and they’re suddenly better. But the reality was that they never had cholera to begin with. So this actually reinforced their faith in medicine, and I think there’s a parallel to that today as we’re all searching for that miracle cure. But we’re not being very careful. The media and some of our leaders are not understanding that ‘correlation’ is not ‘causation.’”
Kelton also said the economy played an influential role in both pandemics.
“People really paid attention to the daily newspapers, which would list the number of deaths in the community,” said Kelton. “If a city was infected with cholera, that meant that farmers wouldn’t come into town to sell their goods or buy merchandise. The business community often reacts first during a pandemic, calling it an ‘exaggeration,’ or as with cholera, a ‘typical summer ailment.’” 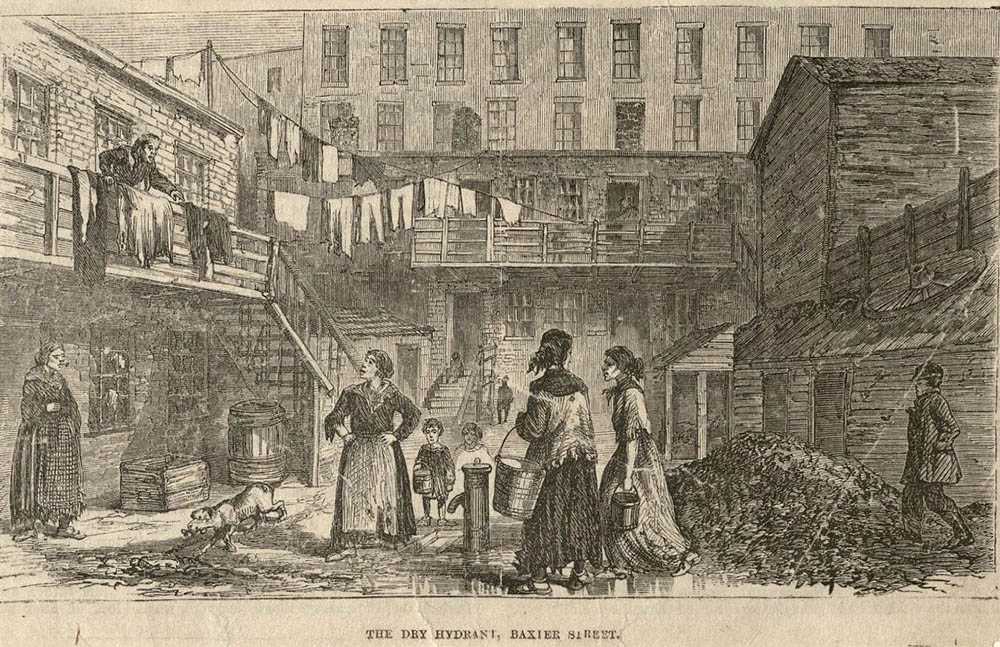 “The Cholera and Fever Nests of New York City.” Illustration from the Healy Collection. 1866. Courtesy New York Academy of Medicine.

As soon as death rates would go down, the business communities began to call for shops to reopen, and people would write letters to the newspapers and pressure the boards of health to declare the threat over.
“And then people came back to town and guess what — they became infected,” said Kelton. “Some of those that thought they were never going to die because they were in this ‘invulnerable’ class of people came back, drank the water and became infected, and they saw the disease spike again.”
In the end, the parallels of these pandemics reveal similar desires that lead to repeated mistakes.
“There are historians such as myself that focus on these pandemics, but in the general narrative of American history, when they do figure prominently, they’re usually in a progressive narrative,” said Kelton. “By that I mean ‘this epidemic came, it brought really bad things, but people, being ingenious, create solutions, and we went on to solve the urban problem about sewage contaminating the water supply. When influenza came in 1918 it was devastating but hey, we figured it out and developed a vaccine. But I think we forget the human agency involved, and the inequality involved that leads to disproportionate death and suffering for the powerless in society.”
Is there a lesson that we could have taken from the cholera epidemic that would have made our dealing with COVID-19 better? Kelton said there is, and not coincidentally, it aligns with one of the United States’ most controversial and passionate political discussions, and one that has been brought to the forefront of the COVID-19 pandemic.
“Today we like to think of access to clean drinking water as a right,” said Kelton. “The cholera epidemics of the 19th century, especially after it was discovered that the epidemics stemmed from sewage-contaminated water, led to modernization of water and sewage systems. We, especially in the United States, forgot the central lesson that health is a public concern, and that we should all have access to healthcare as a human right just as we have a right to clean water.”
— Robert Emproto
Watch Professor Kelton’s lecture: