Imagine being a sophomore in college and losing your father — just a year after your mother died. That was Hayley Rein’s reality.
The Stony Brook University psychology and sociology double major, who will graduate in August, chose to channel her grief into leadership roles as well as social and academic opportunities on campus. 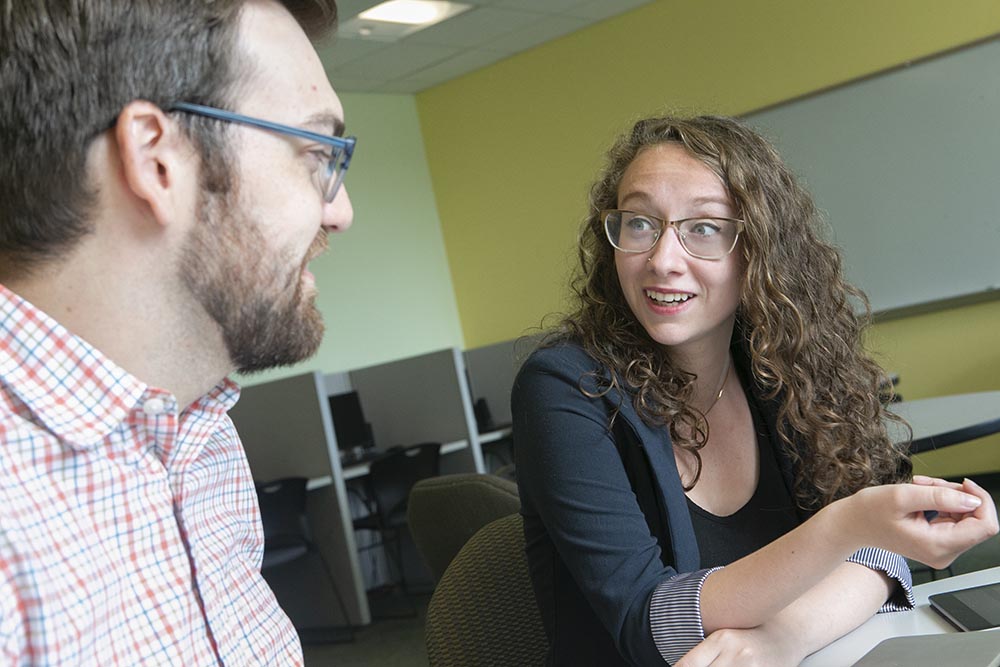 Hayley mentors Nicholas Raffel
at the Writing Center on campus, where she is a staff member.

“I was pretty apprehensive about getting involved and meeting new people. I felt connected to the campus community almost immediately and suddenly felt like I had a place where I belonged,” remembered Hayley. “I never expected to feel so at home at Stony Brook. I wanted to treat it like a period of time that I just got me a degree and then I’d move along, but it clearly turned out to be so much more than that for me.”
For Hayley, immersing herself in residential life such as service in the Quad and Hall Councils gave her confidence in her leadership abilities. Meeting professors who specialized in the academic areas she was passionate about, such as medical sociology and health psychology, satiated the academic component, and forming lifelong connections with peers and roommates and working several jobs on campus provided her with a social network.
“Being involved in different areas of service across the campus community, like Chill Peer Health Educators, Undergraduate College Fellows and the President’s Council of Student Advisors has given me the opportunity to act as a change agent in a variety of ways. I’m very appreciative of these opportunities so I wanted to spend my time giving back to the campus that has given me so much,” she said.
“My dad was a social worker and I spent a lot of my time in the hospital with my mom because she was sick for most of my life,” said Hayley. “I knew I wanted to go into some sort of public service, helping-oriented profession and I’ve always been fascinated with medicine and healthcare.”
“The Heart Gallery was an idea I had during my sophomore year and I was just waiting for the right time to execute it when I’d be able to tap into the greatest number of resources and networks — networks such as University Scholars, the Student Health Advisory Committee and Stony Brook Volunteer Ambulance Corps — to make it happen,” said Hayley.
“I lost my father to a heart attack and cardiovascular disease (CVD) awareness is incredibly important to me.” 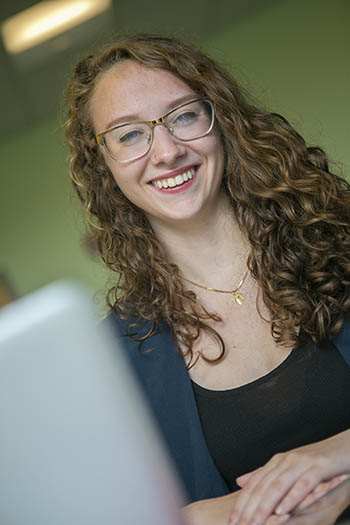 The Heart Gallery  was an awareness-heightening event Hayley curated that combined the arts and medicine and Hayley hoped would appeal to a wide range of students.
“I received nine submissions across different types of media such as painting, embroidery, wood burning, animation and writing and facilitated a conversation about the CVD risk factors with more than 70 student attendees,” she recalled.
Her mother’s last months also had a great impact on Hayley.
“Watching my mother’s health decline was difficult, but it was even tougher when I realized that other people weren’t as fortunate as we were to have access to healthcare and support,” she said.
Hayley is planning to pursue a career in healthcare policy, where she will be able to use the skills she developed as a researcher to explore court cases and legislation to work toward a more equitable and accessible healthcare system.
This summer she is in India with SUNY Cortland conducting research in public health and finishing her BA. As part of a group of ten undergrad students from New York colleges, Hayley will be investigating health disparities in southern India and working with local organizations to provide immediate relief and possibly interventions, for a month. The research initiative is funded by a Gilman Scholarship and the Edward Guiliano Global Fellows Program.
— Glenn Jochum