“Something that I’ve enjoyed about the research I’ve done is that, over time, I’ve been able to see myself grow as a scientist,” says undergraduate researcher Gabrielle Paniccia ’19.
“I’ve moved from asking ‘What does this result mean?’ to knowing how I want my experiments to proceed, which has been a really neat evolution.” 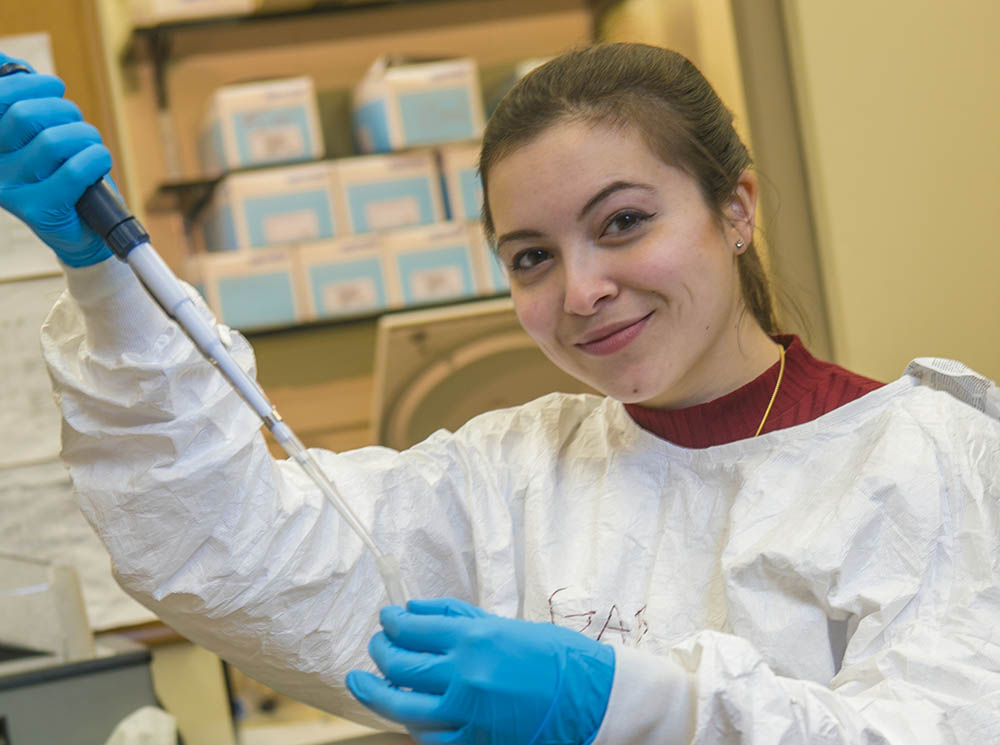 Gabrelle is a senior in the Women in Science & Engineering program (WISE), majoring in Biochemistry. In her freshman year, she joined the laboratory of molecular biologist Laurie Krug, where her research has primarily focused on using a CRISPR-Cas9 and CRISPR-Cas9N system to target and inactivate the oncogenic virus MHV68 in vitro.
In Summer 2017, Gabrielle participated in the SULI summer research program at Brookhaven National Laboratory, working in the laboratory of Dr. John Shanklin to study the effect of specific metabolic gene knockouts on triacylglycerol synthesis in Arabidopsis thaliana. Last summer, Gabrielle participated in Weill Cornell Medical College’s ACCESS program, working in the laboratory of Dr. Björn Kafsack to investigate an apparent link between lipid synthesis and epigenetics in P. Falciparum, the most virulent of the malaria parasites.
“A lot of what I learned about enzymes in Biochem 2 turned out to be critical for this summer’s research,” Gabrielle says. “It helped me to hit the ground running.”
Gabrielle has been active as a WISE mentor, and as editor-in-chief for Spoke the Thunder, Stony Brook’s literary magazine. She also has been involved as a junior writer for Her Campus, Stony Brook Chapter and is an affiliate scholar with the IMSD-MERGE program.