Fulbright scholar Allyssa Schoenemann ’16 expects to cope well with the difficulties posed by coronavirus, in part because she’s accustomed to dealing with challenges. She was born with diastrophic dwarfism — the only person in her family with the condition. 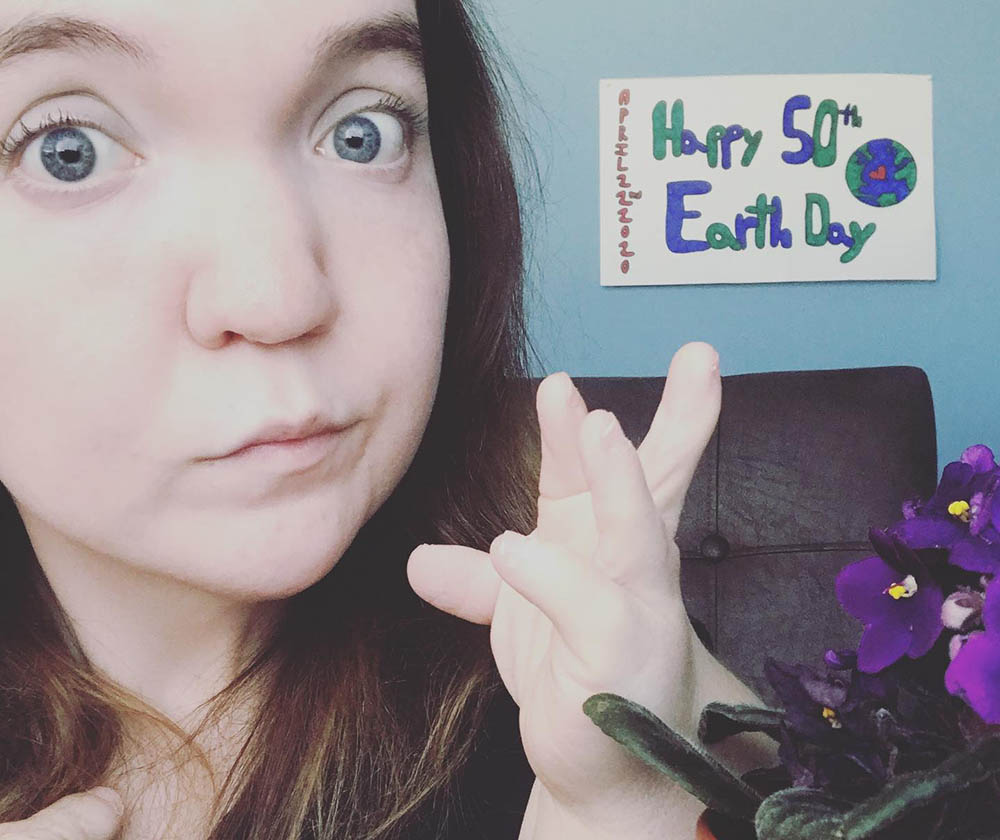 From 2013 to 2016, Schoenemann, 29, attended Stony Brook University, which she chose because it was a great value, close to her home in Lake Grove, NY, and offered a program in TESOL (Teaching English to Speakers of Other Languages). Schoenemann received her master’s degree in TESOL in 2016.

Previously, she traveled to Germany in 2015 as a Fulbright Scholar to work as a teacher assistant. The Fulbright U.S. Student Program is a highly competitive scholarship opportunity that provides funding for American students to conduct research or teach English in more than 140 countries.

“My Fulbright experience changed my life. It brought a feeling of independence that I never knew I had,” Schoenemann said. “It inspired me to be more culturally aware of the world around me.”

Diastrophic dwarfism is a rare genetic disorder that is autosomal recessive, meaning those with the condition receive an abnormal gene from each parent. The disorder causes decreased sulfate content in the body, which affects cartilage, bone growth and height. Studies have shown that the taller the patient, the less severely he or she is affected, said Schoenemann, who is 36 inches tall.

Although Schoenemann is quick to point out that 20 percent of the world’s population fits into the “disabled” category, she takes exception to the nondisabled population defining those who are disabled. 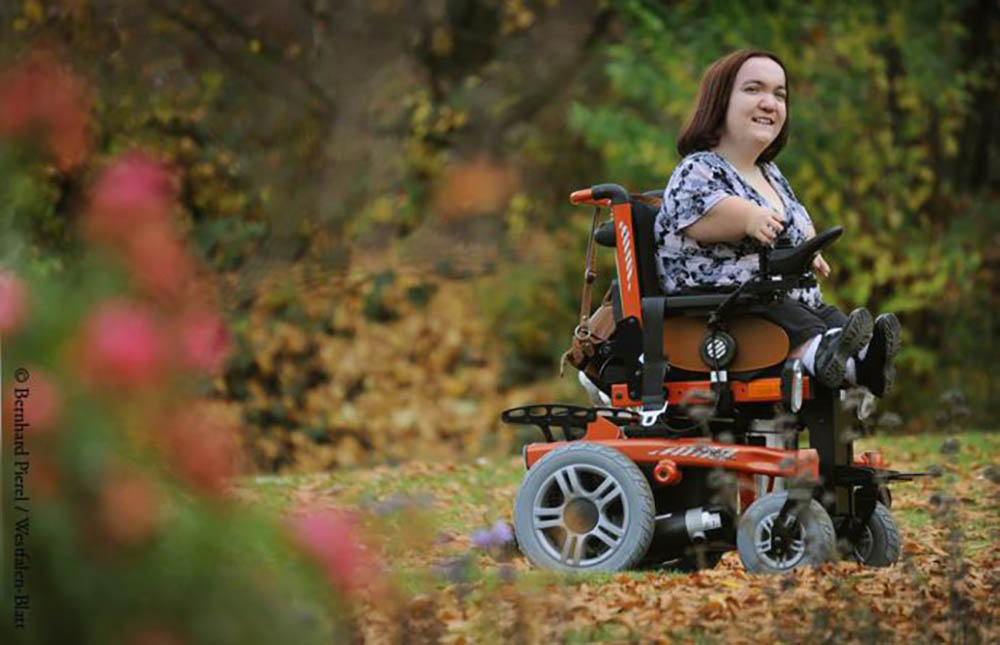 “Nondisabled people still try to control our language by reminding us that we are not disabled but ‘differently abled.’ While this phrase seems to nondisabled folk to focus on the person and not the disability, my disability is part of my identity,” she said. “If we constantly do not take disability into consideration in all branches of life, then it will continue to be ignored.”

Allyssa attributes her knowledge of disability issues to her lived experience as well as her return to Stony Brook in 2018-19 to earn a certificate in Disability Studies. “It was actually my connection to Fulbright that led me to meet a student pursuing a degree in Disability Studies and want to study the field as well,” Schoenemann said.

While she was in Germany, Schoenemann noticed that some assistants did not mind being addressed informally, but she requested that students call her Frau Schoenemann.

“Teachers were always called by their last names and even though I was an assistant, I wanted to be taken seriously,” she said. Schoenemann’s surname is German, but she traces her ancestry to Ireland, Russia, Latvia and Finland. She added that the first incidence of diastrophic dwarfism was in Finland. “So, it makes sense that I have a link to that country,” she said.

Schoenemann’s connections to Germany are longstanding. In the 1990s, her family corresponded with a German family with the same surname. In 1998, the German family stayed with the American Schoenemanns while on vacation.

In middle school, influenced by that connection and a trip to Germany in 2002, Schoenemann and her brother studied German, in which she is now fluent.

Even though Schoenemann has required assistance through the years, that did not stop her from wanting to help others.

“I thought about other jobs as I was growing up — social worker, zoologist, guidance counselor, etc.,” she said. “My mother, now retired, was an educator. I began to go to my mother’s job (she was a preschool teacher) on half days of elementary school and worked with the students. From that moment on, I thought that education was a perfect field for me to go into,” she said.

Understandably, Schoenemann has encountered more obstacles in her path than most nondisabled students. She did not have a car until the age of 20, so as a commuter student she relied upon accessible public transportation for two and a half years. She also notes that there are some disabled students who will or can never drive, so accessible public transportation is a must.

Although Schoenemann’s disability issues are manageable, she believes that there is considerable room for improvement, even though the Americans With Disabilities Act of 1990 shone a light on the plight of those with mobility issues. She explained that some people with diastrophic dwarfism rely on a wheelchair, as she does, but not everybody with the condition needs one at first.

“Many will end up with arthritis much earlier than most adults, and there is a 70 percent to 80 percent chance for scoliosis, which, depending on severity, can lead to surgery. Metal rods, commonplace to stop the curvature, can limit movement. Additionally, due to issues of bone growth and effects on cartilage, many people have multiple surgeries throughout their lifetime, which results in more scar tissue and leads to pain, limited movement or the need for more repairs in time,” she said.

Using a wheelchair or scooter can provide independence, which can boost self-esteem, as Schoenemann found out. “There was a time in college when I thought that a scooter would make me look less disabled. However, I am always going to physically look different and have impairments, so I eventually went back to a wheelchair,” she said. 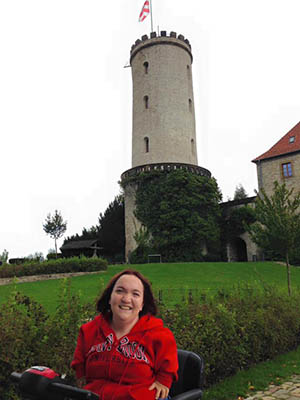 Schoenemann credits her Fulbright scholarship for helping her get the wheelchair she uses today. “I had trouble bringing my scooter over to Germany and using it on public transportation. Fulbright Germany funded money to buy a wheelchair that I still use today.”

Still, she believes that more can be done to assist those with disabilities. “A major problem is maintenance of accommodations. Automatic doors make using facilities easier for me as a wheelchair user, but they are rarely checked to see if they are working properly. Sometimes, even though people saw me struggling, only when I asked if there could be changes made did they consider it,” she said. “However, at my most recent workplace immediately after I was hired, the principal asked me what if any accommodations need to be made to the school. I asked for a push-button door opener in front of the school and after a week and a half, it was installed.”

Then there is the emotional aspect of the disability, which just as important as the physical consideration.

“When I was going for my bachelor’s degree, I definitely felt that professors were not sure if I was capable of being in the classroom with students, even though many of these professors were professors of special education,” she said. “If we teach for students with disabilities, we should also understand that these students become adults. I am three feet tall and it can be difficult to ‘image’ me teaching teenagers, but if I act like a teacher, then I should be treated and respected as such.”

Although she has set her sights on returning to Germany, she thinks fondly about her years working as an English as a New Language (ENL) teacher assistant in Smithtown, NY.

“I had my own classroom called ‘ENL Support.’ Students from at least two grades would come to me for assistance in English as well as their other content areas, such as science and social studies,” she said. “These students provided me with a wealth of new information about a variety of other languages and cultures, from Honduras to Haiti.”

Where would Schoenemann like to see her career take her?

If the pandemic causes her to stay in the United States, Schoenemann would like to remain at her current job as an ENL teacher assistant until the opportunity presents itself to become an ENL teacher. Conversely, if she can move to Germany, she wants to return to school to receive a German teacher certification in education and sociology. At the same time, she would work as an assistant or substitute teacher until she receives an official teaching job.

Whether she stays in the United States or returns to Germany, Schoenemann is confident that her disability should not affect the way in which her students and colleagues treat her. However, at the same time, she said it is important that her students and colleagues not ignore her differences. “Sometimes I need help, and I want to feel comfortable with those around me,” she said.

In the end, she said, “I believe that my profession and disability can and should coexist.”