It’s only about five miles from the Stony Brook campus to downtown Port Jefferson, but those five miles can seem like 500 when there’s no simple and convenient way to get there…especially in cold or inclement weather. To help make the attractions of Port Jefferson easily and safely accessible to students and employees, the University has partnered with the Port Jefferson Village to provide a free shuttle between the two locations. With an assist from dedicated street signage in the Village, it won’t be hard for visitors to see that Port Jefferson is “Seawolves Country.” 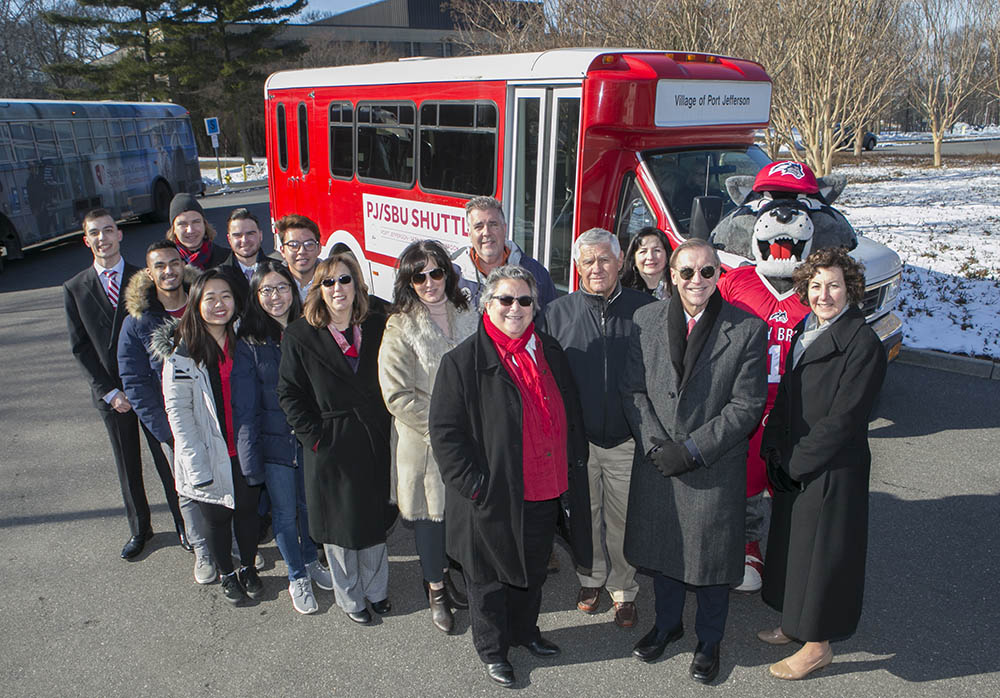 The PJ/SBU Shuttle will run in a continuous loop between the University and Port Jefferson Village during specified hours, with stops at the Three Village Shopping Center on Rt. 25A, which features Wild By Nature and Stop & Shop locations, and the Long Island Railroad’s Port Jefferson train station.
A kickoff held on Thursday, March 7 was attended by Stony Brook University President Samuel L. Stanley Jr., Village of Port Jefferson Mayor Margot Garant, and other representatives of both the University and the Village. The inaugural run left the Stony Brook campus later that day.
The Shuttle will pick up passengers at the SAC Loop, the Chemistry Loop and the Chapin Apartments bus stop near the Health Sciences Center and University Hospital, and runs Thursdays, 3:00 pm to 9:00 pm; Fridays and Saturdays, 11:00 am to 9:00 pm; and Sundays, 11:00 am to 6:00 pm. Passengers just need to show their Stony Brook ID and the ride to Port Jefferson is free.
The Shuttle was initiated by Mayor Margot Garant with support from the Greater Port Jefferson Chamber of Commerce, the Pro-Port Jefferson Association Restaurant Group and Stony Brook University’s Government and Community Relations Office.
“We’ve been trying to connect the Stony Brook campus to the village for a while,” Garant said. “Stony Brook is an economic engine for our businesses. We had the backing of the Board of Trustees and the community in general and we think this is a win-win opportunity for everyone.”
“I’m very proud we were able to launch this program,” said Kevin Wood, parking administrator for the Village of Port Jefferson. “SBU students, faculty, staff and employees get free transportation to a wonderful village, merchants in the Village get more business and the Village ultimately makes more parking spaces available as no cars play a part in this new program.”
This pilot program enables campus members to enjoy the dining, shopping and entertainment of Port Jefferson Village without worrying about parking. Even better, less traffic into the Village also means less emissions. The PJ/SBU Shuttle will run until May 23, 2019. Details can be found on the pjshuttle.com website. Riders can also track the shuttle’s location on the Passio GO! App.
An added bonus of the shuttle program is that it is completely funded by parking meter revenue so there is no cost to the taxpayers of Port Jefferson Village. 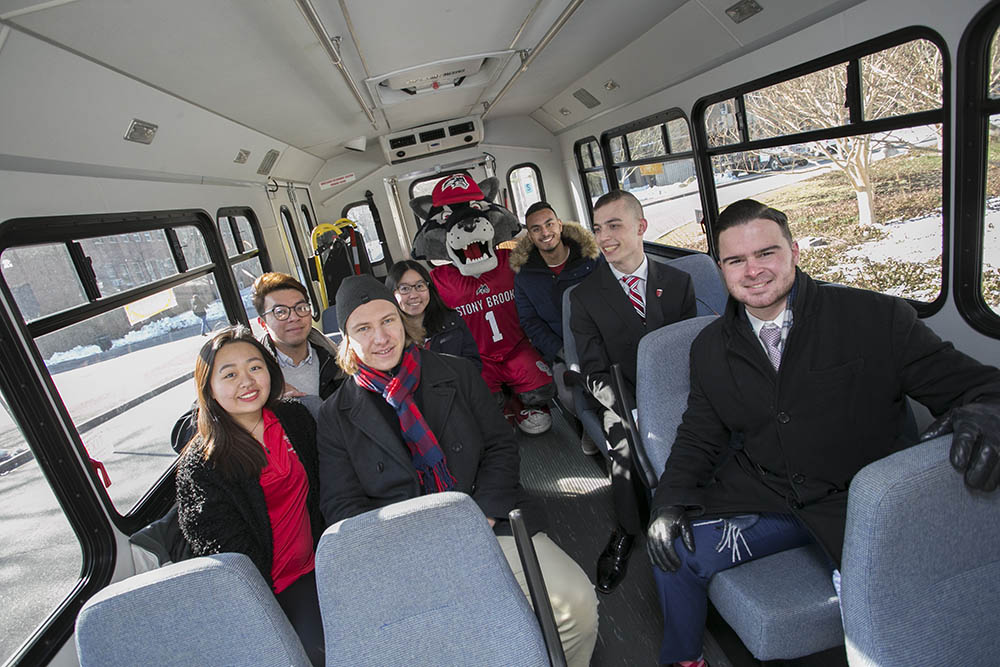 Wolfie joins a group of riders ahead of the Shuttle’s maiden voyage.

“The students and employees of Stony Brook University enjoy a great relationship with the Village of Port Jefferson,” said Judith B. Greiman, Chief Deputy to the President and Senior Vice President for Government and Community Relations. “We appreciate the support by Mayor Garant to make the Village more accessible in a safe and easy way.”
“This is a really great installation,” echoed graduate student James Vassallo ‘17, president of the Graduate Student Organization and currently a graduate student in the Master’s in Public Health (MPH) program. “We have a large student population here, many who come from outside the region, and this is an opportunity to explore areas off-campus and take advantage of the great things Port Jefferson has to offer.”
“This shuttle adds safety and security when we travel, especially at night and on weekends,” added Justas Klimavicius ’19, Business and Political Science, and president of the Undergraduate Student Government. “It’s better than taking an Uber, it’ll be run by Port Jefferson, and it’s a means of transportation we can trust.”
Port Jefferson offers visitors a scenic waterfront and “short-walk” accessibility to shops, restaurants, museums and more. It’s also a hub for the Bridgeport and Port Jefferson Steamboat Company, one of the oldest ferry companies in America, which provides ferries that take hundreds of passengers to and from Connecticut each day.
If the first weekend was an indication of things to come, Port Jefferson will indeed be “Seawolves Country” this spring; almost 250 riders took advantage of the service, more than tripling first weekend estimates.
— Robert Emproto