With four lifesaving surgeries, Stony Brook Medicine’s Kidney Transplantation Services created a kidney transplant chain that now has bound together donors and recipients in shared gratitude and friendship.
It started when Alfred Barbieri’s wife, Deborah, decided to donate a kidney to her husband. Unfortunately, her rare blood type was not a compatible match for Al. But it turned out to be a  match for New York Mets legend Ed Kranepool, whose kidneys were failing. 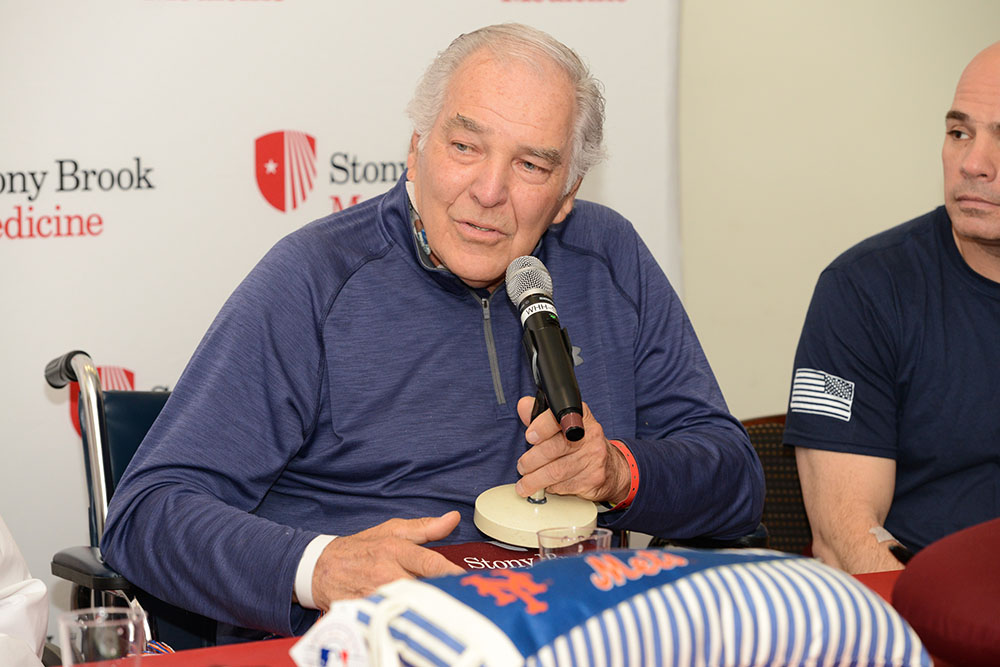 Completing the chain was police officer Brian Cooney. He was an “altruistic donor” – someone who gives a kidney to whoever might need it most, for no other reason than to help save a life. His kidney was compatible with Al.
At a press conference on May 10, the four new friends, together with Stony Brook physicians Wayne Waltzer, MD, Director, Renal Transplantation and Professor, and Chair, Department of Urology, and Frank Darras, MD, Medical Director, Renal Transplantation, and Clinical Professor, Urology and Renal Transplant, gathered to give an update on their progress. There were smiles and tears as they told the crowd that even though their surgeries took place only three days before, they already were feeling well enough to be discharged home. The only evidence they had undergone a major medical procedure was the hospital identification bracelets on their wrists.
Kranepool said he and his wife look forward to summering in the Hamptons and spending good times out on their boat. His new kidney came just in time to give him good health and energy to participate in the Mets organization’s celebration of the 50th anniversary of the 1969 Mets miraculous season and World Series win.

Cooney, a Port Authority police officer, said he chose to pay it forward because “I’ve had a blessed life and a blessed career, with very few problems to complain about.”
Al, who spent years coping with life on dialysis, was overcome with emotion as he described what his new kidney means for him and his family. “With this transplant I’ll be able to see my children graduate, I’ll be able to go to their weddings, I’ll be able to see my grandchildren. And that’s a very special thing.”
As for his wife Deborah, even though her kidney wasn’t a match for Al, she was still grateful for the chance to make a difference by getting on the transplant list. “I decided to take a shot, go on the list, and it’s the best thing I ever did,” she said.