Exploring the Electrochemistry of Water-Based Batteries

Researchers at Stony Brook University and the U.S. Department of Energy’s (DOE) Brookhaven National Laboratory have identified the primary reaction mechanism that occurs in a rechargeable, water-based battery made from zinc and manganese oxide. The findings, published in Energy and Environmental Science, provide new insight for developing grid-scale energy storage. 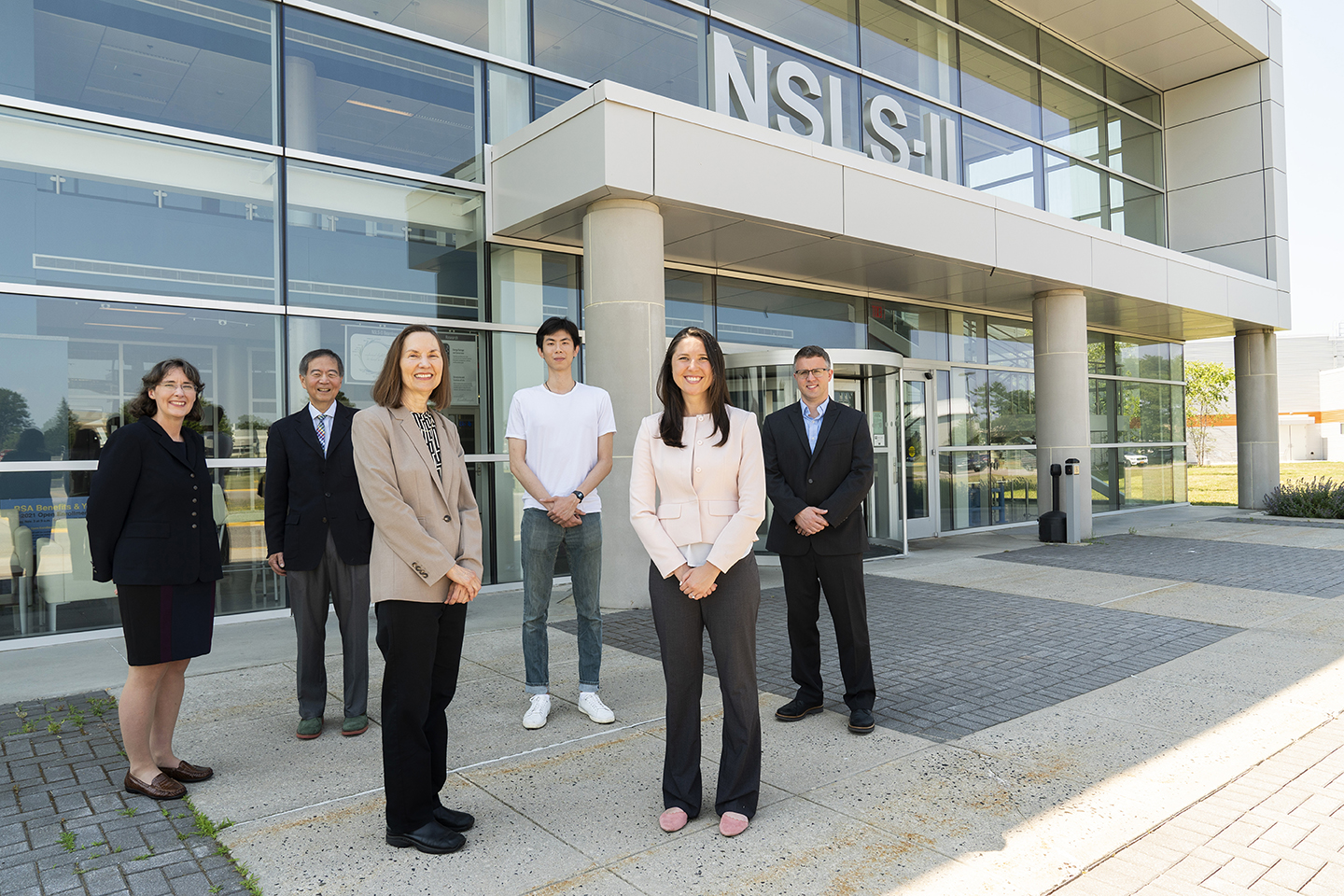 Before renewable energy sources like wind and solar power can be fully integrated into the electric grid, scientists must develop advanced batteries that can store these intermittent sources of power. Researchers at the Center for Mesoscale Transport Properties (m2m), a DOE Energy Frontier Research Center led by Stony Brook in collaboration with Brookhaven Lab, are currently studying water-based batteries as a safe and scalable solution.
“As we think about big batteries that can back up the grid, we’ve become very interested in using water as the electrolyte, rather than the flammable solvents that are used in traditional lithium-ion batteries,” said Distinguished Professor Esther Takeuchi, director of m2m and co-author of the study. Takeuchi, from Stony Brook’s Department of Materials Science and Chemical Engineering, holds a joint appointment at Brookhaven Lab. “We are very mindful of environmental impact. In the rare event that something goes wrong with this technology — if a giant, grid-scale battery started to leak — leaking salt water is a lot safer than leaking something flammable.”
“It’s also hard to find something cheaper than water,” Takeuchi said, expanding on the cost efficiency of deploying water-based batteries across the grid.
Cost efficiency and safety were two factors Takeuchi and her colleagues also kept in mind for their latest study on the zinc and manganese oxide-based battery, as both materials are cheap, abundant and nontoxic. Scientists have studied rechargeable batteries comprised of these compounds before, but the research was widely inconclusive.
“We found several papers, all published within the last few years in very high profile journals, that all came to different conclusions on what the reaction mechanism in this battery actually was,” Takeuchi said. “So, we decided to take this on as an area of interest.”
To understand the complex reaction mechanism in the zinc/manganese oxide rechargeable battery, the researchers turned to the National Synchrotron Light Source II (NSLS-II), a DOE Office of Science User Facility at Brookhaven Lab. NSLS-II is an ultrabright x-ray light source that can reveal the structural and chemical makeup of samples down to the atomic scale. There, the research team ran three rounds of experiments, one at the Quick x-ray Absorption and Scattering (QAS) beamline and two at the X-ray Fluorescence Microprobe (XFM) beamline.
Starting at QAS, the team ran x-ray absorption spectroscopy experiments to probe the battery’s electrochemical changes.
These results from QAS presented important yet puzzling data; there was too much current passing through the battery to be explained by oxidation state changes.
“That’s when we realized we needed to do an operando imaging experiment,” Takeuchi said. Operando experiments occur while the sample is operating or as a chemical reaction is occurring. For battery studies, that means data is collected while the battery charges and discharges.
Many of NSLS-II’s advanced beamlines, including QAS, specialize in operando experiments. But for this study, the research team ran two experiments at XFM, where they could also conduct element-specific imaging. First, they produced an elemental map of the electrode and electrolyte.
“That’s really where the breakthrough came,” Takeuchi said. “SBU Professor Ken Takeuchi suggested that we map the electrolyte while the battery discharges, pause the experiment, and then continue the discharge. We saw that while the battery discharged, manganese was moving from the cathode into the electrolyte. The manganese concentration kept increasing as long as the battery was discharging, and once we put the reaction on pause, the concentration stayed the same.”
In the second round of experiments, the team continuously cycled the battery — that is, charged and discharged the cell many times.
“Element-specific imaging with high detection sensitivity is a distinguishing characteristic of (synchrotron-based) x-ray fluorescence microscopy,” said co-author Ryan Tappero, lead beamline scientist at XFM. “It’s the high sensitivity that allowed us to capture subtle differences in manganese abundance across the electrode-electrolyte interface.”
“We were able to definitively see that as the battery discharged, the manganese concentration in the electrolyte increased, and as the battery charged, the manganese concentration decreased,” Takeuchi said.
The results enabled the research team to determine the true reaction mechanism taking place in the battery: a manganese dissolution-deposition reaction.
“We demonstrated that manganese dissolves from the solid cathode and into the electrolyte as the battery discharges, then it redeposits on the cathode as the battery charges,” Takeuchi said. “The manganese is not just changing from a solid to a liquid, but rather, it is dissolving and electrochemically depositing as a new phase.”
Takeuchi added, “This was an operando-enabled breakthrough. We’ve spent years developing and testing these methods at NSLS-II. Without them, this reaction mechanism would be very difficult to sort out. It explains why there were so many contrary reports in the literature.”
The researchers say their findings set the stage for pushing water-based, grid-scale energy storage solutions forward, no longer having to rely on trial-and-error-based approaches to modifying and optimizing this class of batteries.
“This series of experiments is a great example of the teamwork that is required to solve large, complex problems,” Takeuchi said. “We had team members from NSLS-II, Brookhaven’s Interdisciplinary Sciences Department, Stony Brook University and our graduate students — people from all different backgrounds — putting their heads together, each contributing to get this data. Collaboration can bring great benefits to science.”
— Stephanie Kossman, Brookhaven National Laboratory