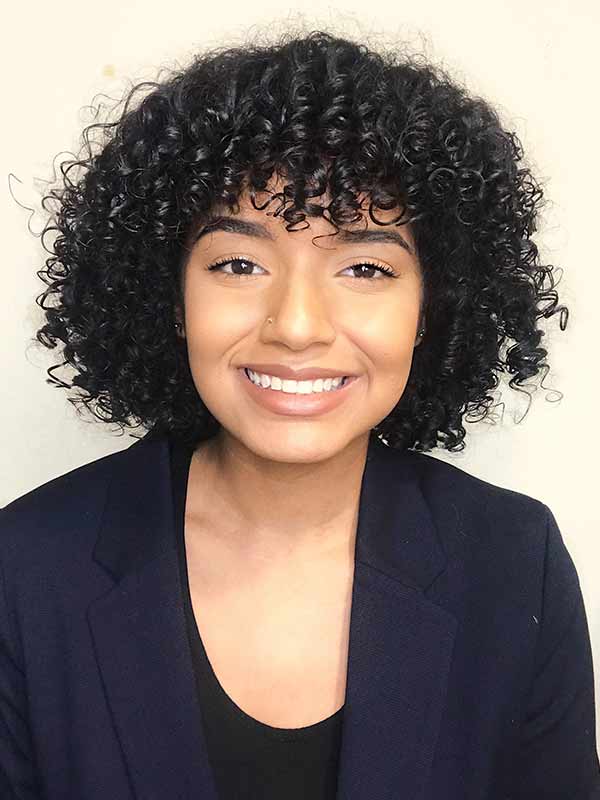 A Stony Brook University psychology major is among a group of Educational Opportunity Program (EOP) students from across the State University of New York (SUNY) system to receive the Norman R. McConney Jr. Award for Student Excellence.
Estrella Núñez ’21, of the Bronx, New York, recently received the academic achievement award — named after the man who helped draft the legislation that established EOP as a statewide program in SUNY — via a Zoom ceremony. Only one student from each SUNY campus with an EOP program wins each year.
The McConney Award, now in its second year, is an honorary degree that recognizes students who have exhibited academic success, perseverance and leadership qualities during their journey to earn an associate’s or bachelor’s degree.
Dorothy Corbett, senior academic advisor/counselor for Stony Brook’s EOP program, known as EOP/AIM (Advancement on Individual Merit), nominated Núñez for the award.
“In addition to the struggles familiar to most EOP students, Estrella rose above all of her circumstances,” she said. “I am extremely proud of her.”
Núñez has overcome seemingly insurmountable challenges. When she was 17, she dropped out of high school because her mother was diagnosed with breast and thyroid cancer and unable to work. Núñez got a job at a beauty supply store as a cosmetic sales associate to help the family financially.
Unbeknownst to Núñez, her father had bone cancer, which went undiagnosed for more than seven years.
“Toward the end of his life, before being diagnosed, he would barely be able to walk due to the enormous amount of pain he was in,” she said. “But he still continued to work.”

Estrella Nunez with her (from left) mother, father and grandmother.

Eventually, his health deteriorated to the point where he could no longer work, and he passed away in November 2017. Then a few months later, Núñez’s grandmother, who helped raise her and with whom she was close, also passed away.
Núñez instantly became the sole income provider for her mother and older brother, Luis — who had been diagnosed with schizophrenia — both of whom are on disability.
With renewed resolve to change her circumstances, Núñez knew she needed to finish her high school education and go to college. She continued to log long hours at work, but still graduated on time.
It was a connection with a Stony Brook advisor who visited her high school that set her on her path. “I began to email this advisor to ask for advice regarding my application and also just to thank him for speaking to us,” she said. “I developed a pretty good relationship with this advisor.”
Originally waitlisted, Núñez said when she was eventually accepted to Stony Brook, she had a gut feeling that was where she was meant to be. “I was accepted to every school I applied for, but there was something about Stony Brook that felt like it was calling out to me,” she said. “To me, that felt like fate.”
Overall, she said the EOP/AIM program is a godsend, as it accepts students who are economically disadvantaged and have struggles that may hinder their educational experience.
“The [summer] bootcamp experience, in particular, is meant to prepare students for college life because most are coming from very difficult childhoods and backgrounds,” Núñez said.
She ultimately wants to be a neuroscientist and research schizophrenia with the hope of finding a way to enhance quality of life for those affected by it, like her brother. For now, majoring in psychology as an undergrad indulges her passion to learn more about the mind.
“When I was a kid, I remember wanting to know why my brother was the way he was and why I wasn’t or why everyone else wasn’t,” she recalled.
Núñez volunteered as a research assistant at the Multi-Modal Translational Imaging Lab in the department of psychiatry. There she studied schizophrenia and addiction alongside researchers, including Anissa Abi-Dargham, the vice chair of research in psychiatry and an expert in the areas of molecular imaging, pharmacology, schizophrenia and addiction.
Núñez also enjoys research that explores a connection between subjects who have schizophrenia, which is often accompanied by auditory hallucinations, and subjects with tinnitus, which is the perception of noise or ringing in the ears.
Since going to college, Núñez has not been able to help her mother financially, as she has had to pay for food, tuition, transportation, housing and other expenses. Recently, a caretaker who had helped her mother with basic chores, no longer offers her services, so Núñez moved back into her mother’s apartment to care for her and her brother.
“Though it has not been easy for me to deal with the many financial and emotional setbacks, I have never given up — and I don’t ever plan to,” she said. “Now that I have been at Stony Brook for a few years, I understand why I was meant to be here. I have grown in ways I couldn’t have ever imagined and I have met people who I will love and hold close to my heart forever.”
— Glenn Jochum
View the winners’ reactions in this SUNY video: