James Haggerty ’19 is saving the planet one vehicle at a time. The engineering major, who credits a building manager for helping him decide to enroll at Stony Brook University, is part of a design team that converted a gasoline motorcycle to an electric one for its senior project. 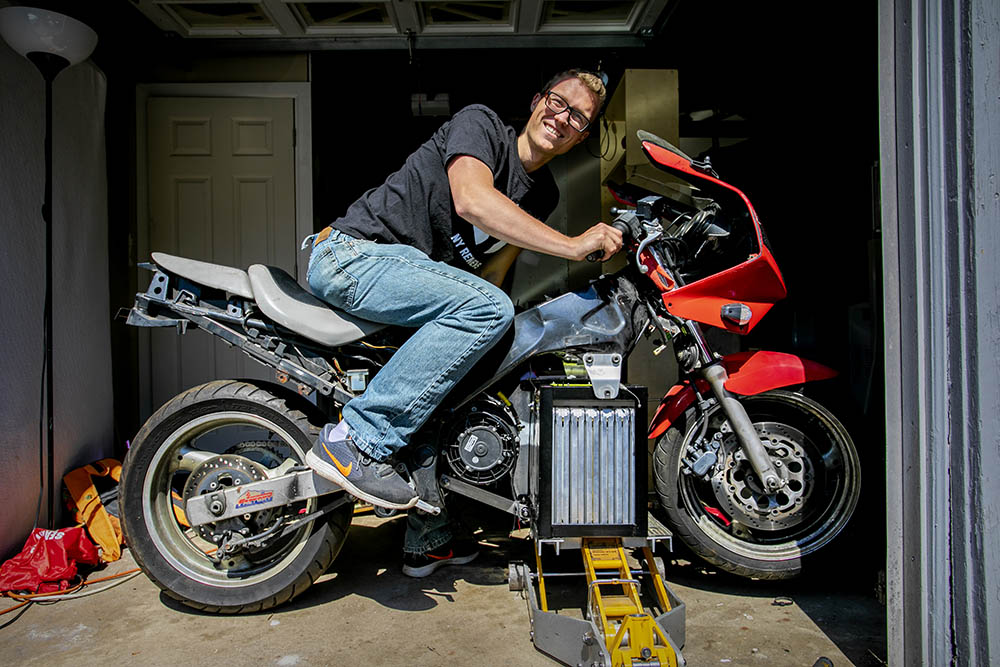 Haggerty first visited the campus more than four years ago and was treated to a tour by now-retired Engineering building manager Bob Martin. The tour that took him to the Baja race car shop, where participating students are given a year to build an off-road car known as the “Baja,” virtually from scratch.
“When I saw that, the metal and the machine shop, my mind was made up,” Haggerty said. “I’ve always been very much into hands-on learning, so seeing that the engineering program had the tools for students to apply those skills if they wanted to was a huge factor.”
Haggerty, along with classmates Brendan Zotto and Avi Cohen, decided to convert the motorcycle so that it can be ridden on an average commute and charge quickly enough to make it usable for trips around town and day rides. They’ve spent countless hours in the lab building control circuitry, testing motors and modifying the original motorcycle. The finished project is a fully functional electric vehicle with a recharge time of about two hours, a range of 70 miles and a price tag of less than $5,000.
“We’ve had a ton of help from the electrical engineering department, especially from Professor David Westerfeld and Tony Olivo, the lab manager for Electrical Engineering,” Haggerty said. “They’ve answered questions about complex circuits, helped us get parts and made sure we had access to the spaces we needed to complete the project.”
Haggerty, a member of the Sierra Club at Stony Brook, has also been inspired by Professor Daniel Knopf, who teaches a class about solutions to air pollution. “He is an amazing example of living by what he teaches,” Haggerty said. “He talked about driving his electric car and installing solar panels on his house, and gave the class the knowledge we need to handle a world with a changing climate.”
Aa a senior, Haggerty interned at Unique Technical Services (UTS), an engineering start-up based at Stony Brook University, where the fledgling company established working partnerships with the Advanced Energy Research and Technology Center (AERTC) and the Center in Integrated Electric Energy Systems (CIEES), along with numerous other faculty and staff. 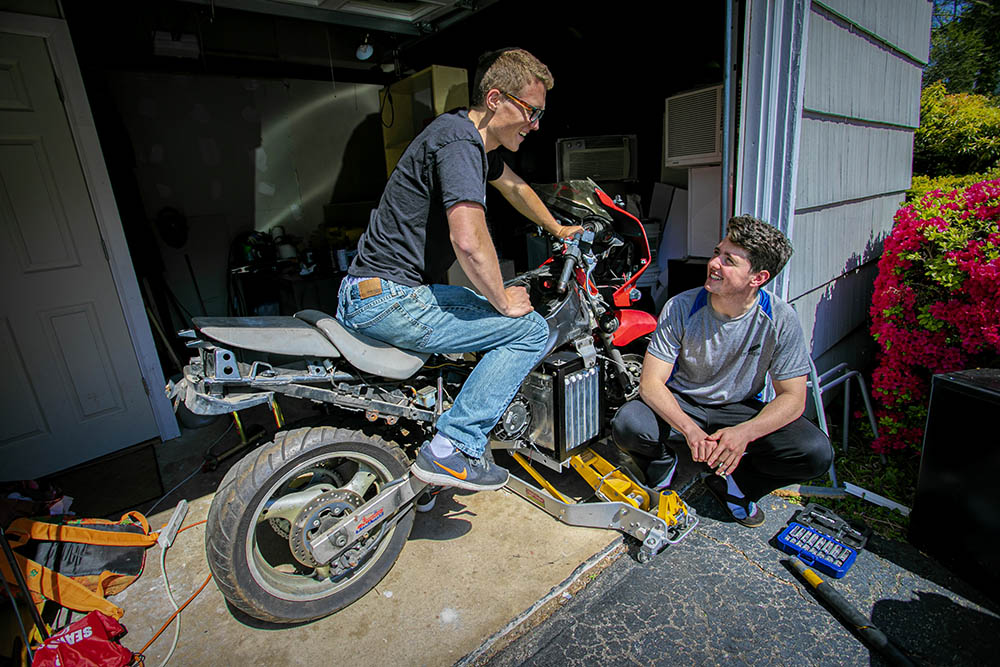 At UTS, Haggerty helped to  convert a UPS delivery truck to an electric vehicle. “I spent many of my days under the truck bolting on parts for the conversion kit they designed,” he said.
When Haggerty feels the need to escape the rigors of academia, he uses his Sierra Club discounted membership rate to go rock climbing. “Being on the wall, 50 feet in the air, with the last carabiner you clipped into two feet below you, is exhilarating,” he said.
Haggerty plans a career working with renewable energy and new transportation technologies. “Transportation makes up a huge portion of US and worldwide greenhouse gas emissions, which cause climate change and other negative effects,” he said. “If we electrify the way we drive and produce our electricity using renewable energy we can cut those emissions. That has huge implications for my generation and generations to come.”
Haggerty is mindful that technological solutions go hand-in-hand with social action. “That’s why I’ve been a part of Sierra Club and tried to help steer the club toward action by attending public meetings, lobbying and building up relationships with off-campus activism groups,” he said. “The way to change is a combination of these things. I’m looking forward to using the experiences I’ve had at Stony Brook after graduation to work toward making our world a better place.”
—  Glenn Jochum