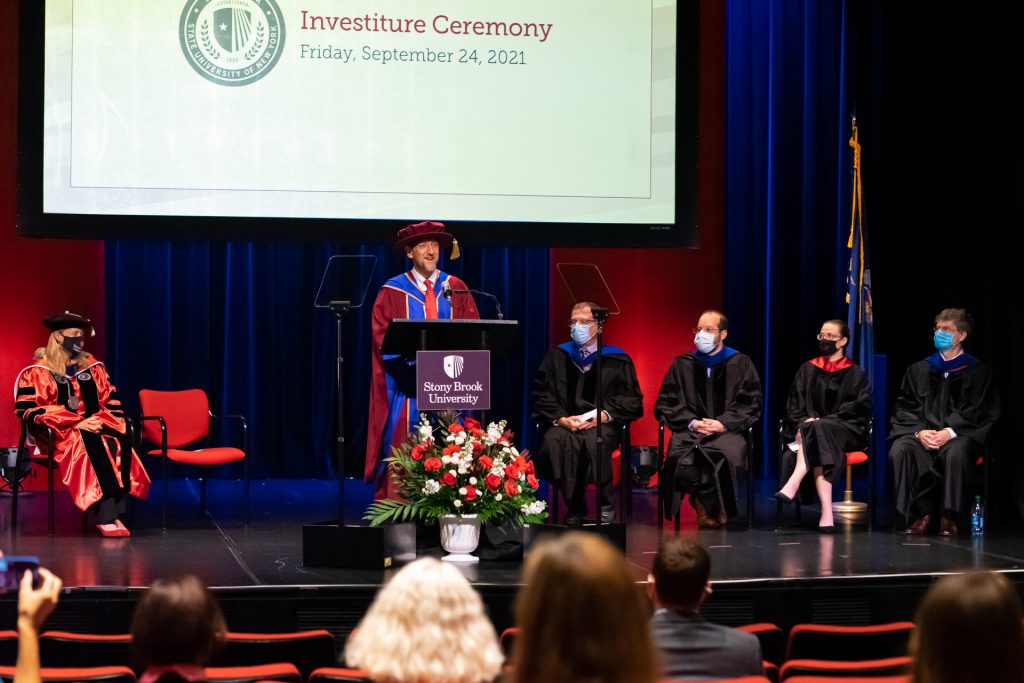 Imagine having the ability to monitor and count Antarctic Chinstrap penguins from thousands of miles away in order to understand how climate change is affecting the species. Or examining differences between human and bat bodies to better understand how organisms might mount a defense against viruses such as COVID-19.
These are some of the wide-ranging and pressing problems that the Institute for Advanced Computational Science (IACS) is tackling, thanks to the most advanced supercomputing technologies available.
On September 24, 2021, at the Charles B. Wang Center Theatre, the Stony Brook community came together to celebrate four of the Institute’s core faculty, all leading scholars in their respective fields: Robert J. Harrison, PhD, as director and chair of the IACS; Heather Lynch, PhD, as the IACS Endowed Chair in Ecology and Evolution; Benjamin Levine, PhD, as the IACS Endowed Chair in Chemistry; and Owen Rambow, PhD, as the IACS Endowed Chair in Linguistics.
During the ceremony, hosted by Stony Brook University President Maurie McInnis and Provost and Executive Vice President for Academic Affairs Paul Goldbart, President McInnis recognized the essential role philanthropy plays in recruiting such accomplished faculty to Stony Brook University.

Our generous and visionary friends who have created endowed positions here at Stony Brook recognize that we are ‘stronger together,’” said McInnis. “With their partnership, we have recruited esteemed faculty like those we are honoring today. Faculty who are the best in their fields, who inspire our students, who push the limits of discovery.”

Before introducing each of the investiture candidates, Goldbart noted, “In recognizing these four scientists’ remarkable contributions, we are launching an exciting chapter for the IACS. By investing these four researchers with endowed chairs, Stony Brook and the Institute are signaling to the world that we are deeply committed to their work and to new breakthroughs in computational science.”
At the Institute, core faculty from fields as varied as astrophysics and atmospheric science to sociology and music collaborate with affiliated faculty university-wide and globally, including partners at the Brookhaven National Laboratory’s Computational Science Center and other research institutes around the world. In addition, close to 150 graduate students work alongside the IACS faculty.
Together, these students, researchers and their colleagues impact our understanding of the world in countless ways, spanning the very smallest to the very largest scales, including:

“This is really why institutes exist in a university — to break down the barriers between disciplines and to create or realize new and bigger opportunities for both students and faculty,” said Robert Harrison, Director and Chair of the IACS and Professor of Applied Mathematics and Statistics in the College of Engineering and Applied Sciences, “When I first came to Stony Brook, in addition to naturally wanting the new institute to be nationally and internationally recognized for excellence in research and education, I also wanted it to benefit the university as a whole. After nine years, and lots of hard work by many people, we are well on our way to achieving these goals, with a big step forward being the appointment of the chairs being recognized in today’s ceremony.” 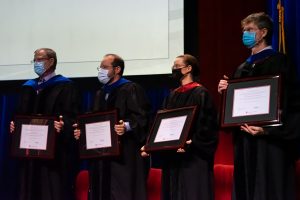 A distinguished expert in high-performance computing, Harrison’s research is at the intersection of theoretical chemistry, computer science and applied mathematics. He has a longstanding interest in applying computational chemistry to address problems in many areas of research, including sustainable energy technologies. With Stony Brook’s acquisition of the powerful supercomputer Ookami, Harrison looks forward to advancing computational science even further by enhancing the productivity, performance and portability of scientific applications using the most modern computing technologies available.
Heather Lynch, IACS Endowed Chair in Ecology and Evolution and Assistant Professor of Ecology and Evolution in the School of Marine and Atmospheric Sciences, is internationally renowned for her extensive research as a quantitative ecologist monitoring Antarctic penguin populations. Combining field research and high-resolution satellite imagery, she is able to track the abundance and distribution of Antarctic wildlife. Using that data, she is developing statistical and mathematical models for the population dynamics of penguins, with a focus on better understanding the effects climate change, fishing and tourism have on penguin populations.
Benjamin Levine, IACS Endowed Chair of Chemistry and Professor of Chemistry in the College of Arts and Sciences,  is highly regarded for his expertise and innovation in the fields of applied chemistry, physics and high-performance computing. His research focuses on developing computer simulation methods that can accurately predict how light and matter interact. This understanding can inform practical applications such as converting light energy to electricity and chemical energy, efficient use of light emission in a cell phone or computer display and biomedical imaging.
Owen Rambow, IACS Endowed Chair in Linguistics and Professor of Linguistics in the College of Arts and Sciences, is an expert in natural language processing and computational linguistics. Specifically, he is concerned with the morphology of language — the study of words, how they are formed, and their relationship to other words in the same language. By studying the relationship between cognitive state and language, and the ways people signal their own beliefs and sentiments, Rambow hopes to build a natural processing system that can understand a speaker’s state-of-mind.
President McInnis concluded, “The brilliant minds at this Institute are reimagining how we use massive data sets and responding to society’s needs with ingenuity, authority, and purpose. As core members of the IACS, professors Harrison, Lynch, Levine, and Rambow are evidence that we are at our best when we bring a dynamic, integrated approach to our work and scholarship. We stand before a world of possibility, and I am thrilled to have such wonderful scholars leading the way.”
— Kate O’Brien