Despite its eye-catching title, Rachel Corbman’s upcoming exhibit, “The Wide World of Lesbian Cats, 1970-Today” has nothing to do with the sexual preferences of cats.
“My project is actually focused on the circulation of representations of cats in lesbian, feminist and queer media,” explained Corbman, a PhD candidate in Women’s, Gender and Sexuality Studies in the College of Arts and Sciences.
“The broader ambition of the exhibit is to trace the history of lesbian feminism from the 1970s to the present, looking at both print cultures and digital cultures.” 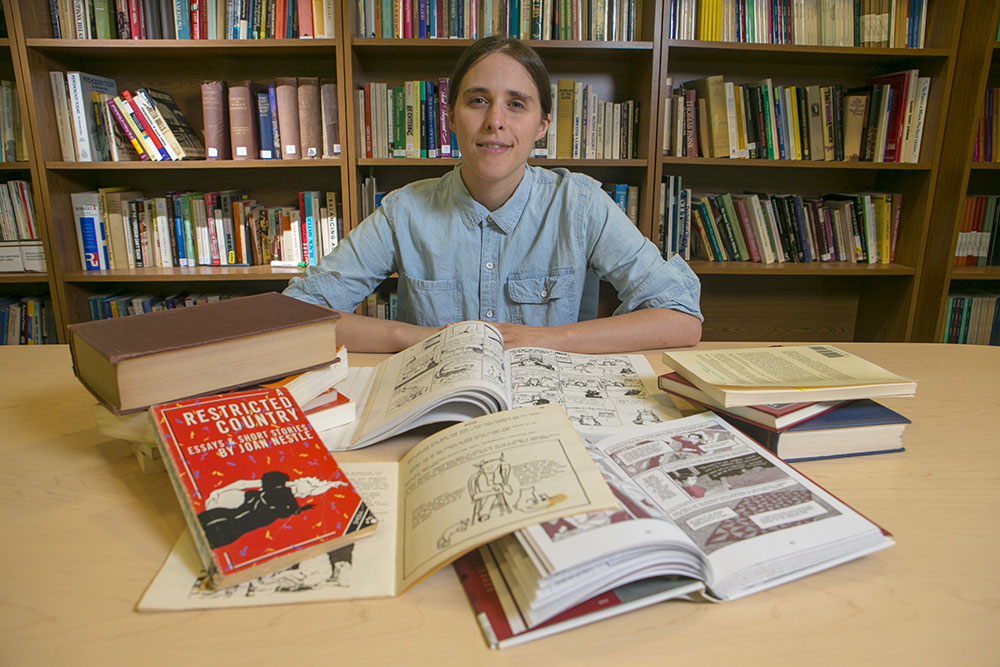 The exhibit, on display at the LGBTQ Community Center in Manhattan in July and August, is the outgrowth of a Public Humanities Fellowship awarded to Corbman. This fellowship aims to “bring humanities into the public realm, encourage emerging humanities scholars to conceive of their work in relation to the public sphere, develop scholars’ skills for doing public work, and strengthen the public humanities community in New York State.”
Corbman also received an Andrew W. Mellon Pre-Doctoral Fellowship in Women’s History from the New York Historical Society, which gives its recipients the opportunity to work on public history projects and programming within the New York Historical Society. Both of these prestigious fellowships allow her to do the public-facing work that relates to her scholarly research on feminist and LGBTQ social movements.
The cats exhibit was inspired by Corbman’s dissertation research on the history of feminist conflicts over women’s studies and gay and lesbian studies during the 1970s and 1980s.
“I noticed that there were a lot of cats in drawings and old newsletters and old comics from the 1970s and 80s,” Corbman said.

“I love cats, and my exhibition focuses on visual representations of them in lesbian print and digital culture from 1970 to the present,” she said.
“I’m interested in the cultural association of cats with sexuality as well as what has been considered ‘deviant and dangerous’ forms of femininity – for example, witches, feminists and ‘spinsters’ – and how lesbian/feminist/queer print culture uses cats in ways that play with these cultural associations.”
Corbman, a New Jersey native, came to Stony Brook after earning a BA in Liberal Arts from the New School in 2010, an MA in Liberal Studies from the CUNY Graduate Center in 2012 and an advanced archival certificate from NYU in 2013.
“Part of the reason I decided to get a PhD in Women’s, Gender and Sexuality Studies is because I focus specifically on the history of Women’s Studies and Gay and Lesbian Studies,” Corbman said. “WGSS felt like the appropriate institutional home for that kind of project for a lot of reasons.”
She was also influenced by a book called Feeling Women’s Liberation by Victoria Hesford, an associate professor in Stony Brook’s College of Arts and Sciences.
“Vicky Hesford’s book came out the year I was applying,” Corbman said. “It’s about the emergence of women’s liberation in 1970, and my project, as I was thinking about it at the time, was about the history of women’s studies. Women’s studies developed alongside the women’s liberation movement, so there was clear overlap in terms of subject matter. I read her book twice that summer and immediately knew that I wanted to work with her.” Hesford is now Corbman’s advisor at Stony Brook.
“Rachel is one of the most impressive graduate students I have worked with,” Hesford said. “She’s a productive and innovative scholar, an excellent teacher and someone who is committed to making the University a more hospitable and productive place for everyone.”
https://www.youtube.com/watch?v=uAWHWxsxZOE
Corbman defended her dissertation, “Conferencing on the Edge: A Queer History of Feminist Field Formation, 1969-1989,” in May. In addition to her research, she also teaches classes on the history of feminist and LGBTQ social movements at Stony Brook. Last summer she taught a course on LGBTQ Digital History in which her students were assigned to work together on different digital history projects –
for instance, a Google mapping project of the first edition of Shewolf’s Directory of Wimmin’s Lands, a guide to lesbian and women’s communes.
Corbman is also a member of the coordinating committee of the Lesbian Herstory Archives (LHA), which houses the oldest and largest lesbian historical collection in the world. 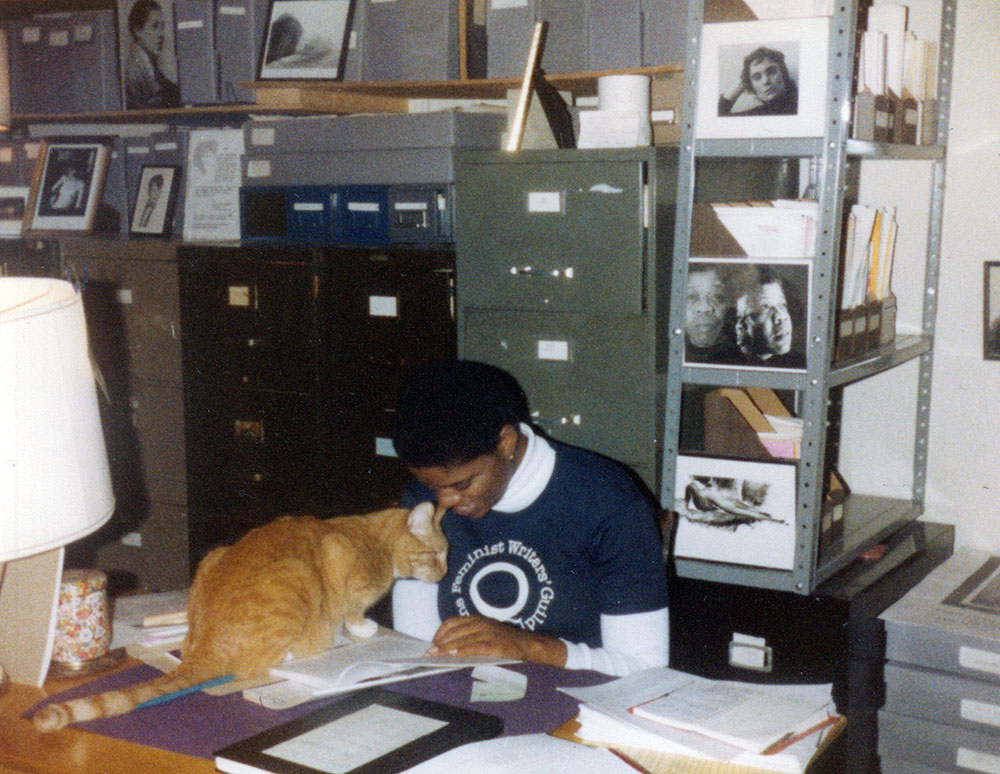 Her responsibilities there include handling donations, processing the collections and supervising the interns who assist her. She also volunteers at the archives on Fridays assisting visitors, many of whom are professors or doctoral students looking for material to help them write their books or dissertations. Assisting these academic visitors has been particularly rewarding, and in a very tangible way.
“Academic publishing takes a long time,” Corbman said. “One of the interesting things for me is that I remember some people from when I first started interning, and I got to watch the entire arc of their research, right to seeing their book actually existing on the shelf.”
One of those most impressed by her unwavering dedication is Victoria Hesford.
“Rachel takes seriously the idea that research and scholarship should be for the public good,” said Hesford. “That’s why she also continues to work in activist archives like the LHA as well as working on exhibitions like the one she has organized on LGBTQ history in New York.”
–Robert Emproto and Rachel Rodriguez