Do Animals Think and Feel?

What, if anything, are your pets thinking? Do they value you beyond your reliability as a source of food? What cognitive traits do we share with the elephant, the wolf, primates and other so-called “higher species”? Are human beings in some sense “superior,” and does that justify ill treatment of animals?
Stony Brook’s Carl Safina can answer these and related questions with authority. A marine ecologist, esteemed author and endowed professor in the School of Marine and Atmospheric Sciences, he has spent considerable time living among the elephants of Kenya, following the day to day activities of wolves at Yellowstone Park and observing the behavior of killer whales and dolphins in the Pacific Northwest. 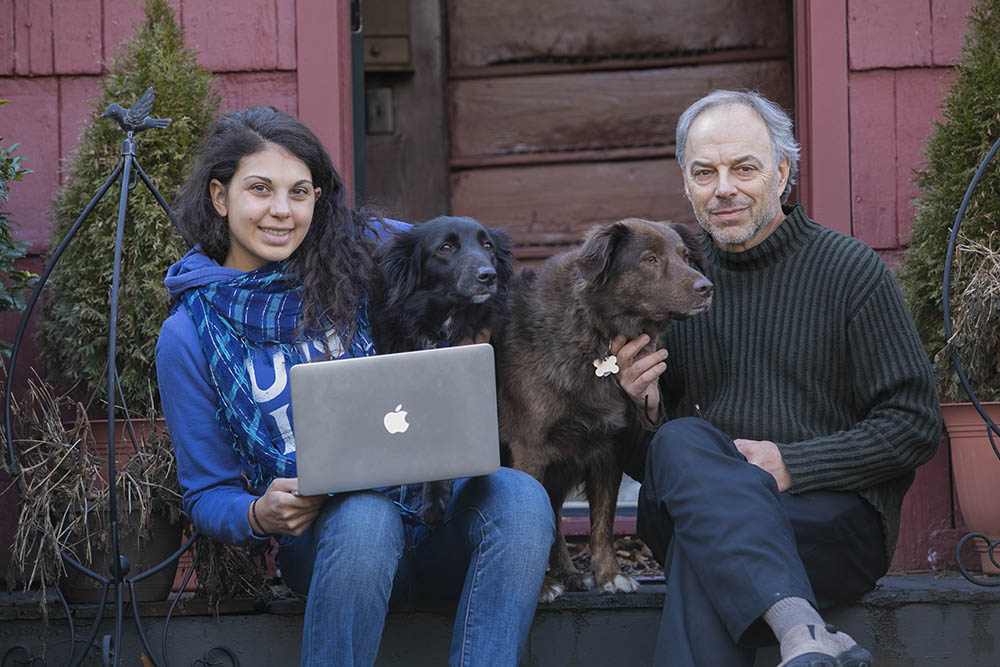 Safina, who holds the Carl Safina Endowed Research Chair for Nature and Humanity, has written extensively on the relationship between humans and the natural environment. His book Beyond Words: What Animals Think and Feel (2015) delves deeply into the intelligence and emotional make-up of animals, issues that resonate loudly as climate change, human indifference and greed threaten the very existence of thousands of species.
Consider the family dog. The point, Safina argues, is not whether dogs are like us but rather: “What are they like?”
“You can’t know what your dog is thinking — except when you can,” he writes. “You both know if you’re about to go for a walk or get into the car.”
“True, most of the time I don’t know what they’re thinking. … A dog’s ability to tell is limited. Their ability to show is a bit better. But they have whatever thoughts they have, regardless.”
Safina’s book deals largely with creatures exhibiting a high range of cognition, from the obvious (the bonobo) to the surprising — the grouper, which collaborates with the moray eel as a hunting partner.
He questions the wisdom of Protagoras’ dictum that “man is the measure of all things.” If intelligence were based on virtues such as kindness, he argues, humans would “have a long way to go before we’re as good to one another or as much fun with one another as bonobos.”
Safina explores various theories of animal intelligence including social complexity and brain size relative to body size. He examines the issue of self-recognition and argues that almost every animal, and certainly every vertebrate, can distinguish self from other, though only a few recognize that a mirror reflects their image.
He also examines more meaningful indices of animal intelligence; e.g., highly developed social structure, ability to communicate and the specialized use of tools. 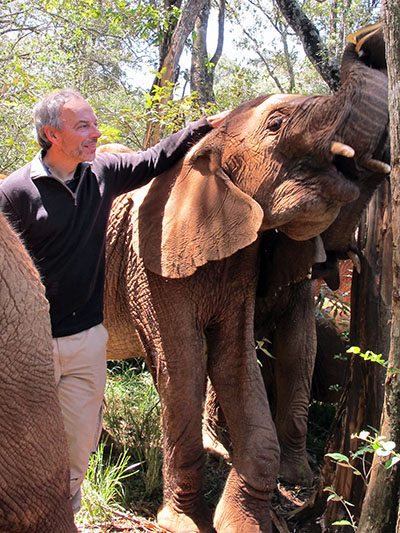 Many of us have seen seagulls dropping shellfish to extract their contents. It’s also widely known that elephants mourn their dead. But in Yellowstone, Safina observed moral behavior among wolves: an alpha male displayed the “human” quality of mercy by declining to kill a competitor from another pack. Safina praises this “superwolf who never lost a fight but never killed a foe.”
As far as anatomy goes, nothing rivals the tool-like efficiency and efficacy of an elephant’s trunk, notes Safina. It can be used to kill, or pick up an egg without breaking it, performing the tasks of what eyes, nose, hands and machinery can do for other species.
Group hunters such as killer whales, lions, hyenas and wolves will even share food, though chimpanzees are more inclined to be competitive this way, he notes.
Environmental journalist Erica Cirino ’15, who has worked for the Safina Center and as a wildlife rehabilitator, endorses Safina’s view.
“I’ve cared for so many different animal species, and I’d consider all of them to be highly intelligent, she said. “But when referring to ‘higher intelligence’ — cognitive abilities above and beyond the primitive instinct to live and reproduce  — crows stand out.”
Cirino said she cared for crows for many years, and all displayed the ability to identify different human faces.
“The more vocal of the two resident crows—an American crow named Phineas—made a distinct Wrrrrcka-wrrrrcka-wrrrrcka! and a plethora of other noises when any of his familiar caretakers entered his enclosure,” she said.
“What’s more, he often created unique noises for each individual. When he saw me, he would often say gwwwwoooow!—a noise different from the sounds he made when other people were around.”
Cirino noted that animals display not only surprising cognitive abilities, but also emotional complexity. “Dogs and humans have long relied on each other for practical reasons, so it makes sense that they share an emotional language as well,” she said.

Robin Huffman, a Safina Center Fellow, agrees. She bases her observations about apes on more than three years of volunteering at Ape Action Africa primate sanctuary in Cameroon, which is home to 350 apes and monkeys orphaned due to the bushmeat and illegal pet trade.
“I’m not a scientist,” she cautioned, “But I’ve known, seen, or heard of many instances with apes that are remarkably similar to what we think of as human behaviors.”
She mentioned:

“When he saw her and called her name, she ran towards him and signed, ‘Bob Bob Bob Hug Hug Bob,’” Huffman said.
“I cared for a two-year-old gorilla who appeared so traumatized and depressed from seeing his mother killed, that he did not want to live,” she added. “He had no physical ailments that could be discerned. He did not want to eat or play, and died after a couple of weeks in our care.”
Such profound grief is not uncommon among young orphaned gorillas, she said. “They can even lose the will to live; they simply shut down and die. Chimps are heartier but in surviving, often suffer more.”
Patricia Wright, Distinguished Service Professor of Anthropology in the College of Arts and Sciences at Stony Brook, has observed many of the same behaviors during her extensive interactions with wild lemurs at Stony Brook’s Centre ValBio in Madagascar. 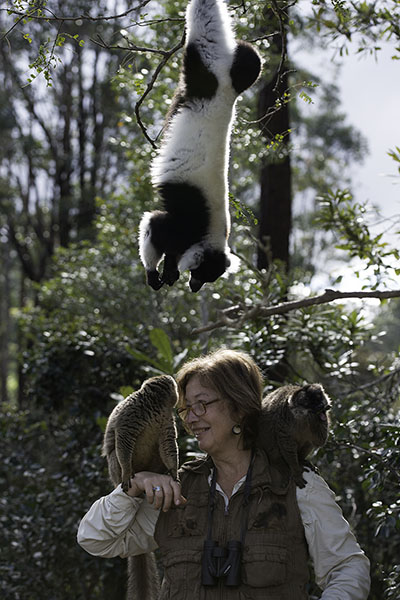 She remembers when her daughter joined her in Africa for a high school project on wildlife. A pair of lemur siblings played regularly in the forest canopy until one day the male followed his instincts and left to join another group. The female appeared bereft and gave repeated “lost calls” — animal vocalizations used to attract the attention of other group members. Eventually she shimmied down a tree and came face to face with Wright’s daughter, inviting her to be a surrogate playmate.
A second anecdote sheds light on how lemurs mourn their dead. Wright explained that the fossa, a carnivorous cousin of the mongoose that more resembles a small mountain lion, preys upon lemurs, climbing trees, chasing them down, using cooperative hunting or attacking by stealth during the night.
“In 1991 an old red male who was the best father and doting husband to two mates was killed by a fossa and the entire family ‘stood vigil’ over his body and moaned,” Wright said. “They would go off and eat and return to moan, emitting lost calls for two weeks.”
Yet even as human beings learn more about the intelligence and emotional depth of other animals, human behavior is hastening their extinction. Paradoxically, a 2018 study showed that the 10 animals most widely regarded as charismatic — including lions, tigers, elephants, giraffes — are among the species most endangered.
Must we hurt the ones we most love?
Safina says that humans are making some strides but progress is torturously slow.
“Animal abuse is illegal in some places. There is some improvement. But the urgency? That is hard when the more urgent thing always seems to be how to find more food, water and cellphones for another billion people.”
By contrast, Safina writes, “animals take only what they need. They are compatible with the life around them. On their watch, the world lasted.”
— Glenn Jochum